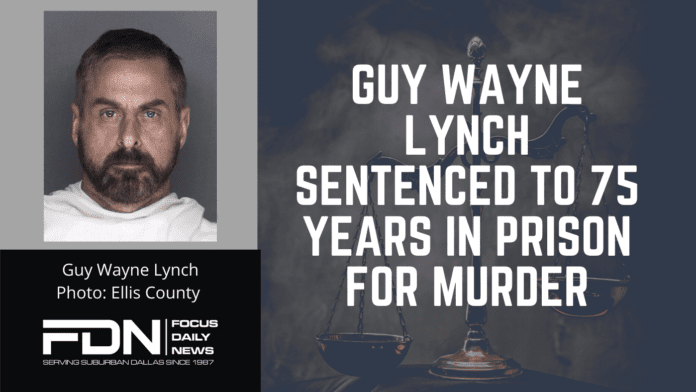 Ellis County and District Attorney Ann Montgomery announced that Guy Wayne Lynch (52) of Aubrey, Texas, was convicted of murder by a jury and sentenced to 75 years in prison in the Texas Department of Criminal Justice.

During the trial, an Ellis County jury learned that on July 15, 2017, hog trappers discovered skeletal human remains in a rural area outside of Alma, Texas. For the next month, Ellis County Sheriff Office investigators worked tirelessly to determine the identity of the human remains. During the same period of time, family members for Tia Spearman, a 21-year-old woman originally from Lawton, Oklahoma, reported her missing. The family had not heard from Tia since June 11, 2017.

Family members believed she was living in North Texas when they lost contact with her. With the help of forensic anthropologists and scientists from the University of North Texas Center for Human Identification, investigators were able to positively identify the human remains as Tia Spearman on August 15, 2017. Forensic anthropologist Dr. H. Gill-King determined that Tia had been shot in the head twice, likely from a barrel of a firearm contacting her head, and that the manner of her death was homicide.

During the trial, the jury heard that Tia Spearman dated and had been living with Lynch in Aubrey, Denton County, Texas, when she went missing. When investigators went to speak to Lynch at his apartment, they discovered that Lynch’s adult son and juvenile son, also had lived in the apartment with Tia and Lynch. Both sons agreed to speak to investigators.

Lynch’s adult son testified in court and explained to the jury that sometime in the middle of June 2017, he noticed that Tia was not at the apartment anymore. When he asked his father, Guy Lynch, about where Tia had gone, Lynch stated that he killed Tia the previous day by shooting her in the head. The son testified that Lynch explained he and Tia had been arguing and at some point, Lynch felt Tia had changed personalities and felt threatened by her. Lynch then shot and killed her. The next day following their conversation, Lynch drove and stopped on a bridge over a body of water and threw the murder weapon into the water.

Since the manner of death had not been previously released to the public at the time of the interview with Lynch’s son, investigators felt that the son’s information was important and likely credible. After securing several search warrants for Lynch’s apartment, truck, and cell phone records, the jury learned that the inside of the truck was covered in bodily fluid.

Forensic scientists conducted DNA analysis and the bodily fluid came back as human blood belonging to Tia Spearman. Lynch’s cell phone records also showed that he and Tia exchanged about 3000 text and phone calls between January 1, 2017, and June 15, 2017. Those calls and texts stopped abruptly on June 15, 2017. Almost all of the phone calls connected to cell phone tower locations around Pilot Point and Aubrey in Denton County, Texas—except for one. On June 15, 2017, Lynch’s phone connected to a tower located about two and a half miles from the location of Tia’s remains in Ellis County. Both the evidence in the truck and from the cell phone records strongly corroborated the son’s testimony.

Further, the jury learned that Lynch had spent over twenty years in the United States Army and owned and had access to several firearms at the time of the murder. The jury also heard the evidence that led investigators to exclude both sons as possible suspects.
Lynch testified in trial. He explained that at the time of Tia’s life, he was living a “life of sin.” He was sexually promiscuous and he was selling marijuana illegally. Evidence also showed that Lynch was a president of a criminal motorcycle gang several years before the murder.

He believed that he started seeing demons in June 2017 and thought that a demon had possessed his body as well as Tia’s body. He explained that he was driving on Interstate 45 with Tia when the demons appeared. He was frightened, pulled out gun from his waistband, and fired one shot into Tia’s head. He continued to be scared, exited the highway, and drove a distance to get Tia’s body and any demons out of the truck. While Tia lay on the ground, he fired the gun again into her head, got back in the truck and drove away. Lynch explained that he kept seeing demons during the next few days and had made a decision to kill himself. However, he had an awakening, accepted Christ into his heart, and was now on the right path.

Not Eligible For Parole Until 30 Years In Prison

Lynch continued to deny that he murdered Tia Spearman and claimed that unknown forces caused him to pull the trigger. Though he claimed he had been changed by his acceptance of Christianity, Lynch never made any attempt to contact Tia’s family or the police regarding the location of Tia’s body for the two months after the murder. He also threw away her clothing and cell phone, shredded important documents such as Tia’s social security card, changed his phone number, threw away the phone he had at the time of the murder, attempted to clean all the blood out of his truck and coached his son regarding what to say to the police if officers ever questioned the son about Lynch’s involvement in Tia’s death.

The jury returned a verdict of guilty for the murder of Tia Spearman and sentenced Lynch to 75 years in prison. Murder is a first-degree felony with a range of punishment of 5-99 years or life in prison. Lynch will not be eligible for parole until he has served 30 years of his sentence. Montgomery stated, “the pandemic could not delay justice indefinitely. Ellis County citizens have confirmed again, today, that the violent exploitation of the defenseless will not be tolerated here.” The almost 5-year delay from the date of offense to the date of trial was due primarily to the covid pandemic interruption of the judicial system in the State of Texas. Judge Cindy Ermatinger of the 443rd District Court, presided over the case.