Home Cities Cedar Hill From Intern to City Manager, It’s Been A Long And Fun Ride... 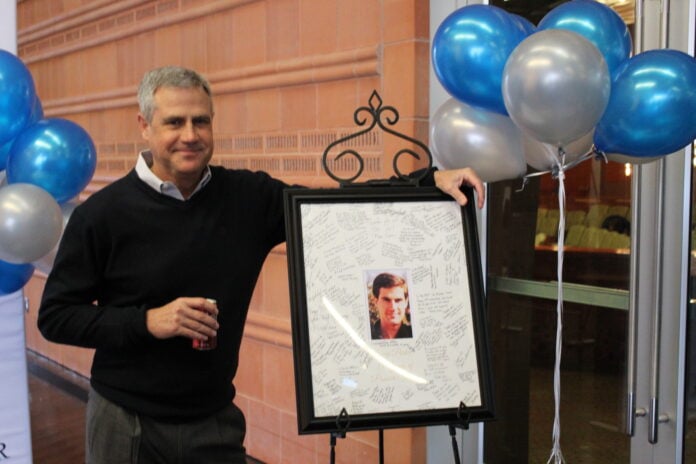 The 57-year-old Porter, originally from Irving, came to work for the City of Cedar Hill in the late 1980s while still in school at SMU. Now, the city recently gave him a celebration in honor of 35 years of service.

“I began as a part-time intern in 1987, doing various jobs after school. It was just so much fun, and I couldn’t wait to get here every day,” he recalled. “The jobs included things like writing ordinances, helping in the water office, asphalting streets, chasing dogs, mapping water lines, and helping with the budget.”

Basically, whatever and wherever he was needed. He loved being there when needed and he still does today. And if there was ever a job to do in Cedar Hill, odds are Porter’s done it.

Over time, his role was expanded to include human resources, economic development, parks and recreation, animal control, capital improvements, emergency management, utilities, police, and public works among other things. His official titles have included assistant to the city manager, assistant city manager, deputy city manager, and then city manager as of January of 2015.

“I guess they just ran out of other jobs for me to do,” he joked.

His time with the city is actually longer than his marriage – which itself is longstanding. He and his wife Pam got married the year after he started working for the city.

“Many of my city colleagues and friends were at our wedding,” he said.

He and Pam have four children, all of whom either graduated from or are attending school in Cedar Hill, of course.

Can’t Imagine Being Anyplace Else

“In Cedar Hill, we like to say that opportunities grow naturally. Greg’s journey over the past 35 years in public service reflects our motto, and we are fortunate to have him,” said Cedar Hill Mayor Stephen Mason. “He has paved an exceptional path and continues to lead the way to excellence in our municipal services and the highest level of public service, making Cedar Hill one of the best places to live, work and play.”

As for why he stayed when city managers all over America are always leaving for bigger cities, he said simply, “I fell in love with the town and its people very early on and couldn’t imagine being anyplace else. It has always had a vision for itself that inspired me and a plan for how it would get there. Regardless of the era, or the particular job I was doing, it has always been a dynamic and exciting city on the move, and I have never, ever been bored.”

In fact, Porter said he’s never had the same day twice in his 35 years. He found a fascination with the work itself and has gathered a deep respect and appreciation for the jobs that make the city work and for those who serve and are called to do them.

Inspired by the Community Spirit

He’s grown up with the city, got married, raised their children there, and said he’s been privileged to have gathered a lifetime worth of relationships and experiences that he wouldn’t trade for the world.

“I was captivated by the stunning natural beauty, the wildlife, the historic downtown, and the friendliness and warmth in the way that people reached out to welcome newcomers,” he said. “Even the old men who used to sit on the bench (outside Sims Drive-In across from old city hall), though they teased me incessantly, managed to worm their way into my heart.

“I have also always been inspired by the community spirit, the aspirations the community has for itself, and the way people here always find a way to work together to make things happen. You could just feel that it was a special place, a deeply spiritual place and it made you want to contribute and be part of it. It’s the same now, even though we’ve grown a lot since I first arrived.”

Porter has played his own key role in helping with that growth. Though, if you ask him about it, he’s humble in his answer.

“In all honesty, there are so many things I’m proud of – and very grateful to have been privileged to be a part of – but not a single one would belong to me. Things that get done here are done through collaboration, planning, partnerships, and working together as a team,” he said. “The city council, board and commission members, pastors, nonprofit volunteers, crime watch captains, youth sports coaches, and others, working together with and supported by the city staff are how accomplishments are made. We call it ‘the Cedar Hill way.'”

And, like so many across the nation – and world – there was the challenge of keeping a city going amidst the worldwide COVID-19 pandemic.

“Without a doubt, I’m proudest of the way our community and the city have navigated and responded to the challenges and storms of the last two years,” Porter said. “There are so many stores of selfless acts, neighbors taking care of neighbors, and people putting it all on the line for others, that even now, it’s hard to get our arms around. Even so, there is no doubt we as a community are coming out of it stronger, more resilient, and more resolved than ever before.”

Looking to the future, Porter’s vision for Cedar Hill to continue to be a premier city that keeps its distinctive character, the kind he fell in love with many years ago and still loves today.

“The community has always had a powerful vision for itself along with strong values and a steady consistent course to get there,” he said. “My small part has been to help steward that vision and to support the journey to achieve it. It’s a vision I believe in for myself and for my family. How can you beat that?”