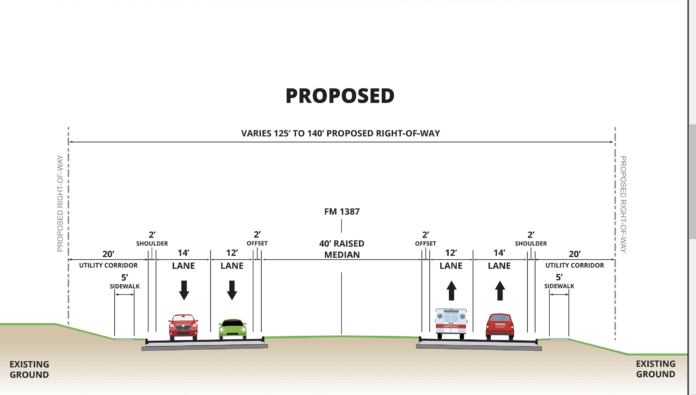 ELLIS COUNTY – Ellis County residents are up in arms pleading with TxDOT to leave their little piece of paradise alone.

Residents flooded a recent Midlothian City Council meeting voicing their concerns. For some it was difficult to speak without becoming emotional. With the southern option being considered, many residents will lose their peaceful wooded surroundings and gain road noise.

Midlothian resident Vickie Dillow, whose property will be affected if the southern route roadway changes are approved, said it will “potentially devastate” people living along Midlothian’s FM 1387.

The southern versus northern route option for the proposed FM 1387 extension has been in the works since the late 1990s/early 2000s. Midlothian, Waxahachie, and Ellis County have had the alignment of this proposed extension on their respective thoroughfare plans since the early 2000s.  The goal of the extension is to eventually extend it to IH-35 to provide for better mobility to address the growth the region anticipated.

Years ago when the discussion started it seems the County and other government officials favored the southern option, but that seems to have all changed now. However, the ultimate decision rests with TxDOT.

For those living on the southern route they are concerned about noise, drainage, impact on wildlife and just a general uproar to the peaceful life they bought into when deciding to purchase their homes in the area.

“Cimarron Meadows was not required to dedicate any right-of-way at the time the development was approved in 2001, as that proposed road was not yet adopted into the City or County’s Thoroughfare Plan,” Dillow explained. “The final plat of Cross Creek, Phase 7, approved in 2004, shows the beginnings of that right-of-way dedication for this future extension so that dedication section is 18 years old.  By this time, that road was already in place on the Thoroughfare Plan and dedication was required when they subdivided the property.”

Dillow also said “When Legacy Estates, Phase 2, did their development in 2019, they were required to dedicate the remaining piece of the right-of-way to satisfy the City’s & County’s Thoroughfare Plan.”

While it is uncertain when TXDOT began considering this project, Dillow said it was before the Legacy Estates homes adjoining it were being built.

“Those homes are on Clayton, Palmer and one on Bandera, she explained. “The last one I found that sold on Clayton, the section behind Cross Creek with tree line, was March 29, 2021, and on Palmer, the last house on this street sold on August 8, 2021. But all the others were much earlier in 2020 or 2021. Every person said they paid more for their lots because they had green space and trees – which is the row for the southern alignment. Everyone I’ve talked to was told it would never be built.”

Dillow said TxDOT seems to currently be making decisions on the area with outdated information.

In a TxDOT Public Hearing on August 30 and again at the meeting for the three neighborhoods and adjoining properties being affected by the southern alignment in September there was further discussion comparing the two routes. An outline of the consideration of all the parameters, and the impact this route will have on families’ properties and quality of life for those adjoining the new route were discussed at that time.

Dillow wrote in a letter to TxDOT on September 15 why the south option for this project is not an option.

“I along with many other people attended the TXDOT meeting at LCBChurch,” she said. “I found the “Proposed Alignment Matrix” information to be of particular interest to me and I would like to explain what it does and does not take into consideration. TXDOT has proposed two options, both of which meet the requirements for a thoroughfare road ranking both as good to manage congestion-travel time, improve safety and accommodate future traffic, with neither route displacing anyone. Those are the only boxes both options have in common, however, there are several major differences listed that must be addressed.”

First, those opposing the southern route point out it is .6 miles longer and will require a bridge, roughly 800’ long and take up 27 more acres of land, displacing 8.5 acres of forest/grassland/prairies and replacing that land with 15.7 acres of concrete for a six-lane road.

She also pointed out the impact on an additional .047 acres and two more creeks if the southern route is chosen.

“All of this at an additional estimated cost of $5 million dollars. With the county covering 10% of that, it will cost Ellis County taxpayers half a million dollars more. That’s without the cost of the enormous water drainage challenges presented by the southern alignment,” Dillow added.

The matrix in question also apparently indicates there are two properties that will be potentially affected on the northern route and none on the southern. The accepted parameters ignore the 39 homes that Dillow said “now enjoy quiet, peaceful settings with their backyards adjoining green space and trees. One of the properties will be sliced in half by the road and another will have most all the trees removed, which provide privacy, protection, and seclusion for their home.

Several properties are bordered with a 50-foot tall, massive age-old tree line affording protection and safety, privacy, a highly effective noise barrier and a necessary windbreak from the 30-plus mph winds that several of the properties frequently experience.”

There is also an entire ecosystem that thrives in that tree line that will be destroyed on the southern route including barn owls, birds, rabbits, quail, and more.

“The removal of this landmark and replacement with a disturbing 4/6 lane thoroughfare bringing traffic noise resonating between three neighborhoods all hours of the day and night can only happen if there is total disregard for the impact to these affected families,” Dillow said. “According to the matrix chart, the north option received a neutral rating for the east west mobility. It is not poor, but neutral.

That should rate as a fair exchange considering the catastrophic affects the southern route will impose on the residents along this alignment. Even though 21 more individual properties will be affected on the northern route, it takes 27 less acres of land with fewer, 39 versus five, homes having a new road in their backyards invading the space where family time revolves.”

Back when Ellis County Commissioners Court considered its part in the project Dillow said Ellis County Judge Todd Little noted before the vote that they were voting on a general alignment and that TXDOT would approve the final position of the road.

County Commissioner Kyle Butler in August told Dillow he had written TxDOT to inform them that he felt the northern alignment was the preferred alignment and he was going on record as that being his alignment of choice.

In an email dated September 2 to TxDOT, Butler stated “I still think the northern route would have the less impact on all the homeowners at Cimarron Meadows and Legacy Est subdivision and still be able to connect with no problem.”

Many residents who also stand to lose their little piece of paradise on the southern route have sent letters saying “no” to the southern route. For example Waxahachie resident Sarita Heitman who previously lived on Ovilla Road (FM664) and decided to move due to the traffic and noise on a main road wrote no to the south option. “The plan is to destroy the entire tree line that keeps it quiet and tucked away and brings a four-lane road with sidewalks through the middle of our neighborhoods.  I am not sure how anyone can think this is better for anyone.  The water flow in this area is already an issue and will compound more drainage issue on the south side of where the trees are currently.”

Heitman goes on to write that “Using the existing road – north option – that everyone and everything has been built around and uses everyday should be the option.  Disrupting everyone lifestyle, homes and communities should not be an option. I do not believe spending an additional $5 million on a project that is going to turn our lives upside down.  This is a waste of money and does not have the value added for the cost.”

For now, residents are fighting to ensure the FM 1387 road that TxDOT is proposing be pushed to the northern route option and not the southern route, due to a less overall impact.