Duncanville controlled the tempo throughout most of the game’s struggle. They were never behind in Friday’s crucial contest. Of their eleven possessions, Duncanville scored four times.

Their first score came on their first possession starting at their own 25-yard line. Gyasi Smith snagged a pass near the right side line from Quarterback Trazon Connley to conclude a 37-yard drive and the score. PAT by Josh Delgado was good. At 9:02 left in the first quarter Duncanville led 7-0.

With 5:51 left in the first quarter DeSoto scored on a quarterback keeper for 3-yards by Courtney Douglas. The game was tied 7-7 at the end of the quarter.

The lone score before the half came on a 37-yard field goal by Delgado with 9:59 left in the half. The first period concluded 10-7 Duncanville.

Neither team scored the third period. It was a dig in, grit teeth, hit hard, and get up and do it again type quarter. Penalties plagued both teams, but Duncanville was the most egregious with 13 for 125 yards. Off sides was called as many times as there are mosquitoes in the Houston Ship Channel. Unsportsmanlike conduct, clipping, pass interference, and late hits were just some of the offenses ordered from the DeSoto menu that Duncanville served. One thing about Duncanville, they did not discriminate. If there was an infraction in the rule book, Duncanville committed it.

The Duncanville defense is the most physical and tenacious group of players I have ever witnessed. They hit you to hurt, then hit you again for you to remember it.

The Panther defensive linebackers blitzed at will. Turning the outside run inside so the pursuing linemen could enjoy the feast. Should the Eagle quarterback get a pass away, especially deep, the Panther deep backs were there to break it up or intercept. Should a pass be caught short, the middle line backer and outside backs made you pay a hurtful price. Often resulting in a fumble and loss of ball. DeSoto had two fumbles caused by hard hits and lost them both. The Panthers allowed the Eagles only 64 rushing yards on 42 carries, while gaining 114 yards in the air.

DeSoto fought back with great speed, play calling, and never say die attitude. It could have been worse had the Eagles not maintained their composure.

Duncanville scored twice in the final period. With 8:31 left in the contest Connley connected on a 7-yard pass to Bryce Walker for pay dirt. PAT by Delgado was good. The TD was set up by Ja’Quinden Jackson’s two long runs from the 4-yard line of the Panthers to the Desoto 7. Jackson led all rushers with 14-145 yards. Connley had 9-19-01-151 yards in the air.

DeSoto scored their finally TD on a Kelan Walker 4-yard run. The PAT by Gerrit Blodgett was good. Duncanville led 17-14 with 5:17 left in the game. Duncanville would score their last TD with 6 seconds left in the game. However, earlier in the quarter Duncanville had driven into the red zone only to fake a chip shot field goal for a running play that was shut down by the Eagle defense.

With the score clock near 0 and both sides having used the official time clock to their advantage, Duncanville had time for just one more play while leading 17-14. Rather than just drop to a knee and secure the victory, Jackson hit the line hard. As the offensive line fired, Jackson went in for the TD. PAT was good. Duncanville 24 DeSoto 14.

I couldn’t get close to Coach Samples for an after-game interview. But I did get close enough to catch his eye. He smiled and the thumb went up. Then he repeated by lips slowly what he had told me he was going to do to DeSoto before the game. Which I will not repeat since I’d like to keep my job. 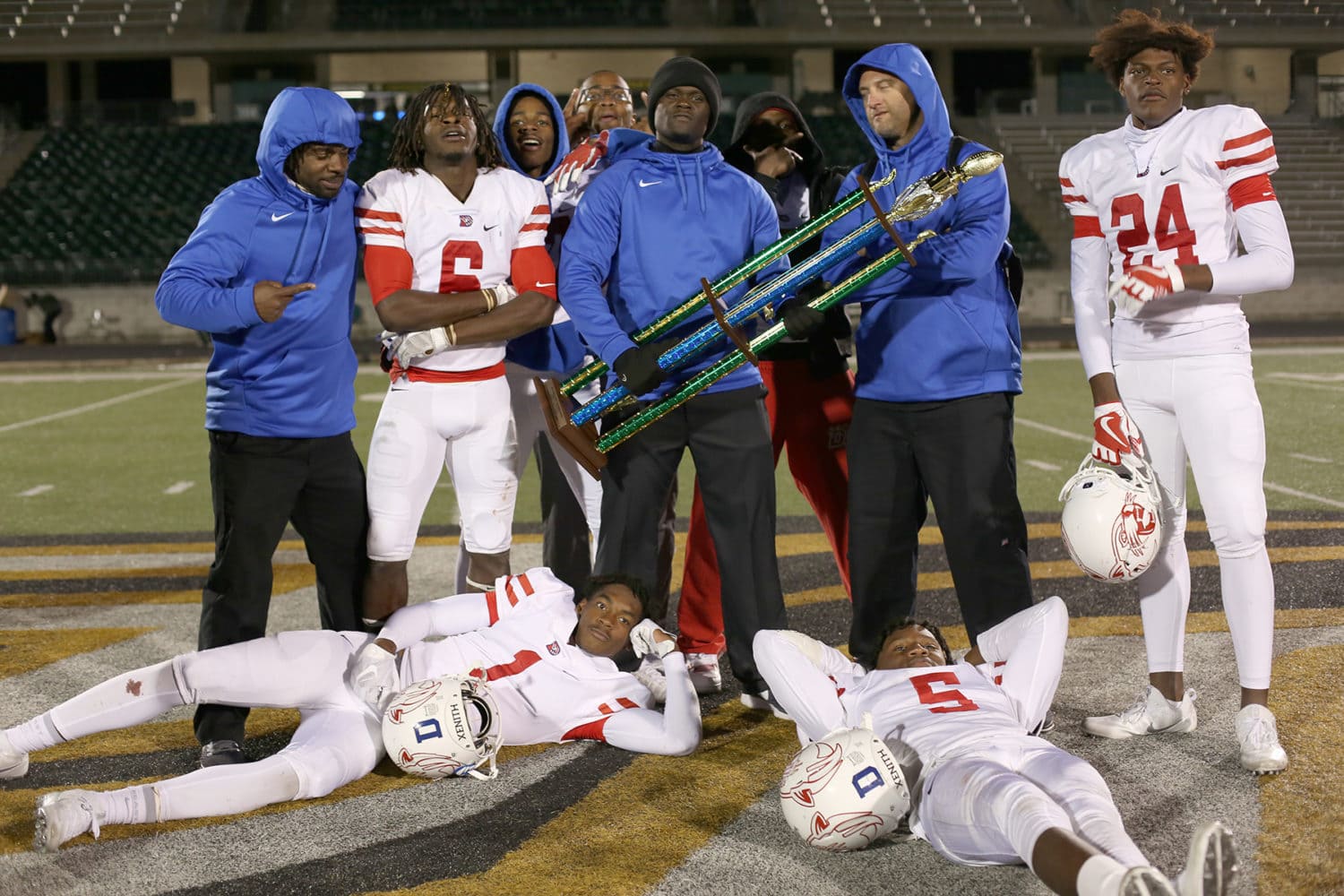