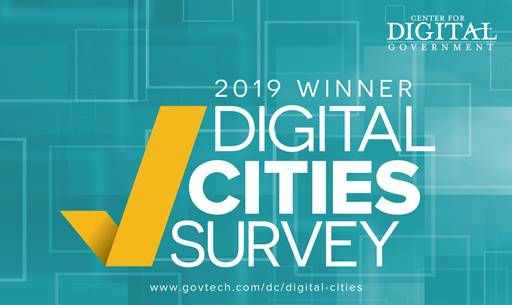 Continued Tech Innovation Keeps DeSoto Among Tops In The Nation

The City of DeSoto has won its fourth consecutive Digital Cities Award from the Center for Digital Government (CDG) by placing in the top ten of all participating US Cities with a population of fewer than 75,000. The California based Center for Digital Government (CDG) is considered to be America’s foremost expert when it comes to recognizing technological excellence by local governments and each year their Digital Cities Award singles out the best cities in the USA for using technology in an innovative manner to make government operations run more efficiently.

“I am absolutely thrilled to learn that the Center for Digital Government has awarded the City of DeSoto with a fourth straight Digital Cities Award for our innovative use of technology to make government operations run more effectively and efficiently,” said DeSoto Mayor Curtistene S. McCowan. “Receiving this coveted designation for four consecutive years shows me that DeSoto has earned our place among the best in the nation and we will continue to incorporate new technology and innovation into our operations so that we can continue to be recognized as being among the best of the best!”

“The top Digital Cities this year are taking the IT department far beyond the role of service provider,” said Phil Bertolini, co-director of the Center for Digital Government (CDG). “They’re exploring creative ways to leverage their technology investments and redefining the role of the public-sector technology leader at the city level.”

Specifically, here is what Digital Cities had to say about DeSoto’s 2019 recognition:

“DeSoto, Texas, placing ninth in this year’s survey, has distinguished itself by continuing to invest in innovative solutions for court and law enforcement procedures, as well as continuing its focus on improved cybersecurity. In particular, the city has continued to expand its innovative “e-court” video arraignment program, which allows defendants to communicate with the judge over video chat. This year, the court also began allowing the public to communicate with staff using Web chat and text to mitigate issues, sign paperwork, ask questions and set up payment plans.

At the same time, the city has also expanded various IT initiatives to aid local police — including installation of facial recognition technology in the jail, with an attached cloud-based shared database. Upgrades to cruiser dash cams were also made that allow for more efficient video uploads and searches, as well as longer retention. The city also recently joined the Amazon Ring network, a digital doorbell and neighborhood watch app that connects residents with police for local notifications and alerts.

Additionally, the city made significant efforts this year to bolster its cybersecurity posture, hiring a new network security administrator who will be responsible for internal security. At the direction of the administrator, the city also hired a third-party vendor to help expand the existing employee security training program, including the inclusion of a phishing campaign assessment. The city has also adopted a vulnerability scanning tool that will be a consistent feature of its vulnerability management program. Looking to the future, the city also hopes to improve staff identity management through the purchase of a multi-factor authentication feature and is in the process of developing a cyber incident response plan.”

About the Center for Digital Government: