DESOTO – The DeSoto City Council’s special meeting earlier this week resulted in a redistricting map that not only took current and future population expectations into consideration, but a myriad of additional criteria.

Council was tasked Monday night with a choice of the Plan A or Plan B revised redistricting plans being proposed for adoption.

Plan A was the council’s unanimous choice with Place 5 Dinah Marks not in attendance to vote.

Syd Falk and Sherry McCall from Bickerstaff, Heath Delgado, and Acosta were on hand for further redistricting information and to change the proposed maps as directed.

Falk went into a detailed explanation of the many factors that go into drawing these maps with a key point being the consideration of deviations. Overall, the deviations being based first on the ideal scenario of the population in each district all being balanced.

If that sum is larger than 10% then there is a need to rebalance the population to be less than 10% since that is the Federal Court standard.

“That is the task of the redistricting itself,” Faulk summarized “It is tempting to think that a plan is superior if it has a lower overall deviation. And, in some respects it may be that it is superior but from a legal point of view your task is to get below 10% and 9.9% is as good as 1.0. Under the 10% it is in balance from a legal point of view, and it is very tempting to think that plan A at 7.93% total deviation versus plan B revised at 9.8% is on that factor alone superior, but that is not true.” 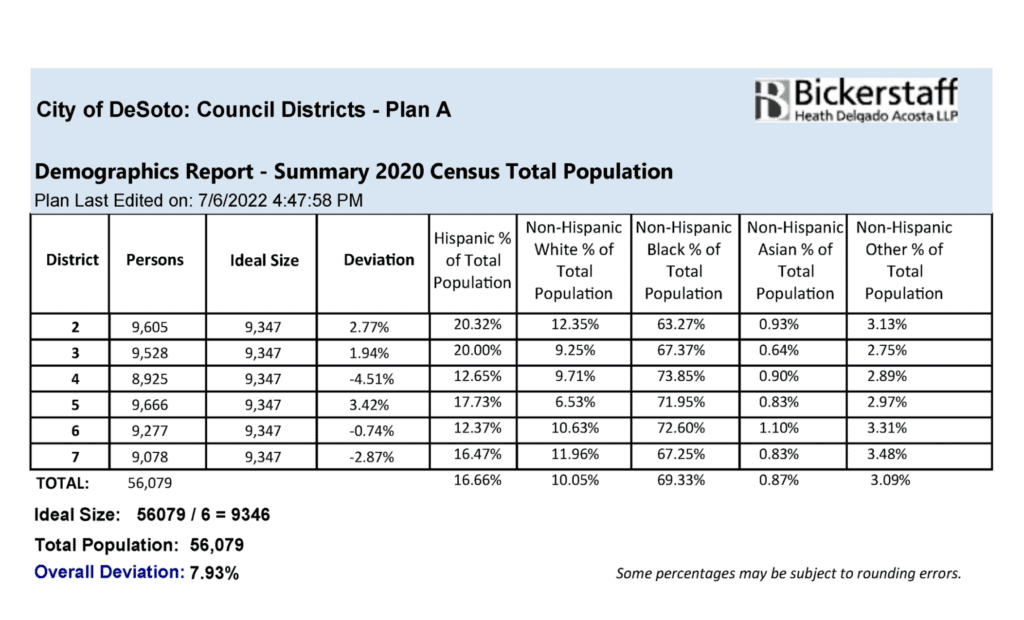 While council did eventually go with Plan A, Falk reminded that other than population the redistricting lines should also take into consideration a look at the actual shape of the districts, their constitutions, or whether it is splitting neighborhoods. All those factors are part of the criteria that council was considering when making their final decision on which map to move forward with for residents to make comment on at the next public hearing in October.

Both plans seemingly had several commonalities. For example, it was pointed out that in Plan A District 2 gives some territory on its eastern edge to District 3, which needed some population. At the same time District 5, which was overpopulated needed to give up some of its population, so some of that district’s area was given to District 2.

“When you look at these maps and see an addition and a subtraction from the single district it is the balancing of the population that allows the district to be put in population balance with the other districts,” Faulk said.

Place 2 Kay Brown Patrick asked since the city does not have single district voting how are deviations and the balancing of numbers applicable to the maps for DeSoto?

Falk said “The short answer is because federal law says so. The underlying rational is sort of foreshadowed by the other label that we give population balancing also called the one person vote principal. The idea is if you have the same number of people in each district each potential vote counts the same in terms of its ability to elect somebody. If you have very disparate populations say 10 times the people in one district as another, which would of course violate the principle then those people in the overpopulated district have votes that are not worth as much in terms of their ability to elect as opposed to the people in the underpopulated district.”

DeSoto Mayor Rachel Proctor said she rationalized it in her head as not so much from the single member district voting perspective, but from a representation standpoint. The councilmember perspective making sure everything is fair and equal across the board.

The two maps were originally brought to council in August. And, while there is no deadline, Falk suggested January 21 for the upcoming May 2023 elections.

DeSoto City Manager Brandon Wright outlined next steps in the process with an update on the city’s website with information about the Plan A map. There will be a Public Hearing on October 18 and then the final vote for the final redistricting map at the November 1 city council meeting.

City of DeSoto encourages residents to attend the public hearing and speak or to fill out a comment card via the website.