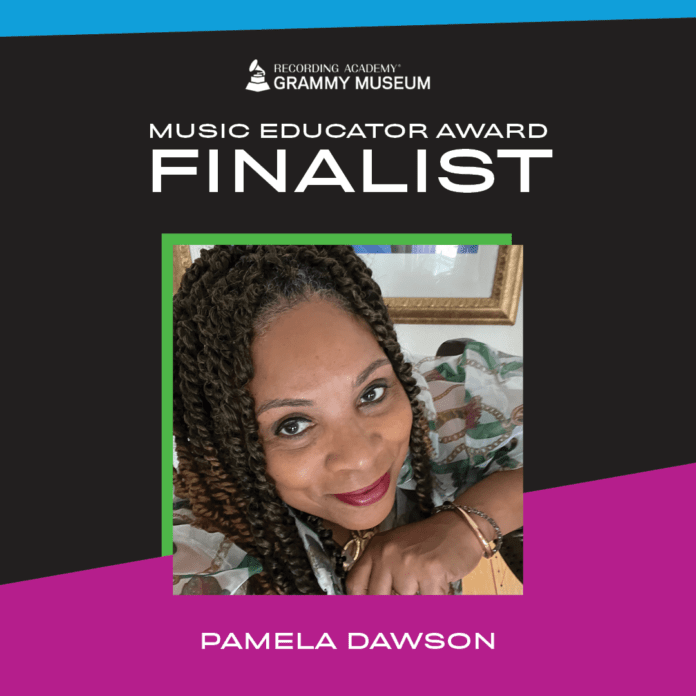 DESOTO – There was a total of 10 music teachers from 10 cities in eight different states who were chosen as finalists for the Music Educator Award™ presented by the Recording Academy® and GRAMMY Museum®.

Pamela Dawson was one of those teachers.

“I am so blessed to be chosen as the sole Texas winner,” Dawson said. “Music is an integral part of the education process in our state and each music teacher and director give 100% of their energy daily to make the magic happen in the classroom and on stage.”

This will be the second time in three years that Dawson, has been named as a top 10 finalist for the Grammy Music Educator Award.

She was one of 1,205 initial nominations that were submitted from 47 states this year.

“It is a truly an Honor to represent these many talented and dedicated music educators as all should be winners,” Dawson said adding “The Music Educator Award is from nominations that anyone can make. This year, I was nominated by a grandparent of one of my graduating students who traveled to Hawaii for a Music Festival in March as chaperone. She was so impressed with the time, energy, and the final outcome of that experience, she took it on herself to submit my name.”

The winners receive an award along with a monetary grant and additionally, one teacher is selected to attend the Grammy Awards in Los Angeles in February.

For now, though, Dawson said it is waiting time for the final selection to be announced.

“The next process is a wait and see,” she explained. “The top 10 have been chosen based on the video requirements that were sent in earlier in June. Out of those submissions, the winner will be chosen.”

Dawson’s career has included her choirs having earned numerous state and national recognitions, including being invited to perform in Carnegie Hall as well as the SWACDA National honor choir.  Several former students are in high level music programs and performing in venues such as Broadway.

An active community member, Dawson has also served in the City of DeSoto as member and then chair of the DeSoto Arts Council, where she initiated the DeSoto Arts LIVE project creating a full day of artistic endeavors and ending with a live musical performance by nationally renowned artists.  She is harpist and vocalist and throughout the years her choirs have been in demand for performances at city events, state representative events, holiday events and to perform for local corporations.  Her choirs have been a regular feature for the Dallas Black Dance Theater’s DanceAfrica event for many years too.

The Recording Academy, in partnership with the Grammy Museum, launched this award to bring attention and recognition to the teaching profession in general and to school music teachers in particular.

The matching grants provided to the schools are made possible by the generosity and support of the Grammy Museum’s Education Champion Ford Motor Company Fund. In addition, the American Choral Directors Association, National Association for Music Education, NAMM Foundation, and National Education Association support this program through outreach to their constituencies.