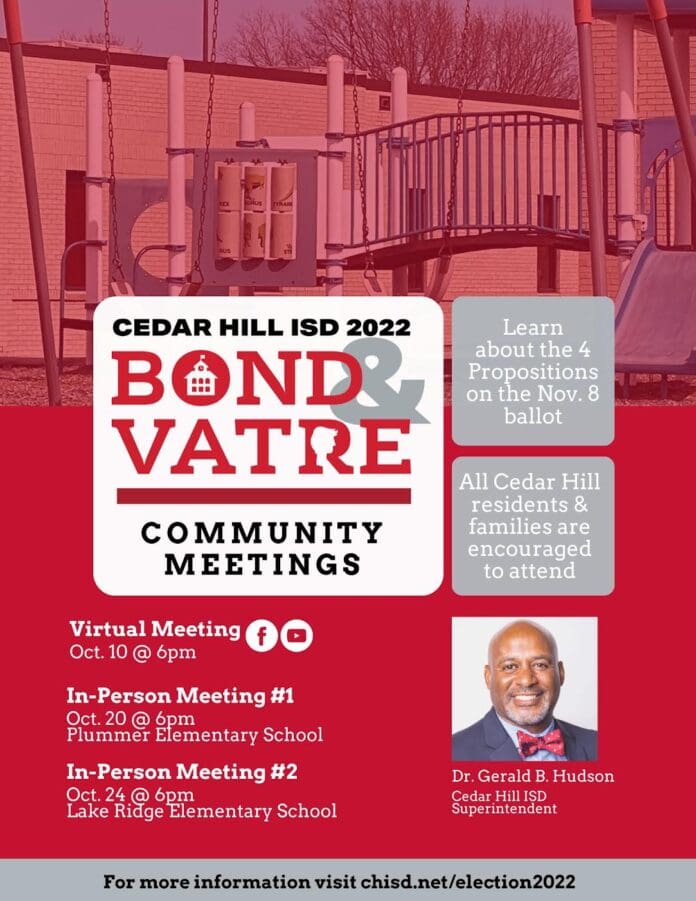 “District representatives will be available to present information and answer questions at each of these three informational meetings about the four propositions on the November 8 Ballot,” Hudson said.

The first meeting will be a virtual one, at 6 p.m. on Monday, October 10 where viewers can tune in via Facebook and YouTube. They’ll be able to ask questions live.

All Cedar Hill residents and their families are encouraged to attend. Voters must register to vote by Tuesday, October 11. Early voting will take place between October 24-November 4.

Generate up to $6 million annually for Academic Programs & Instruction

Through a Voter-Approval Tax Rate Election (VATRE), Cedar Hill ISD would generate an additional $6 million annually, which would be used for teacher and staff salaries, pay raises, classroom materials and academic programs.

CHISD currently has the lowest revenue-per-student in the area. Among Dallas County school districts, CHISD ranks 15 out of 15 and is not able to allocate as much money to teaching and learning as other districts.

Proposition B: Safety and School Renovations

Specifically, it would fund:

The bond would allow CHISD to replace the turf and track at Longhorn Stadium when it reaches the end of its useful life and is no longer in a condition for use.