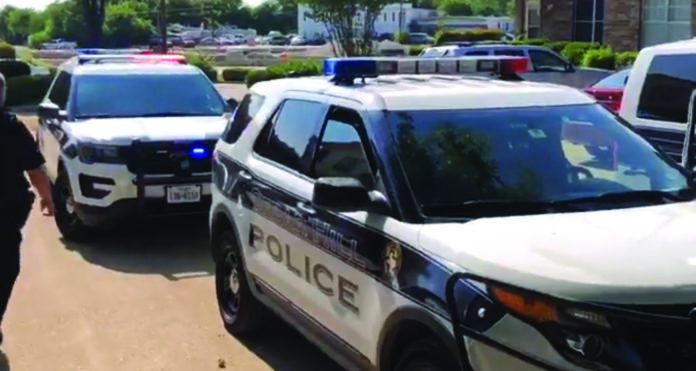 “At 7:09 a.m. officers received a call from a female saying that she had shot her husband,” said Cedar Hill Police spokesperson Lt. Colin Chenault.

When police arrived at the scene they found a 43 year old black male in the parking lot. Upon an initial examination he appears to have sustained a single gunshot wound to his leg.

Reports say that the couple had been arguing that morning. As a result the husband attempted to leave their home in the 900 block of Cedar Terrace. While, the cause of their disagreement was unknown.

“The male was attempting to leave on his motorcycle and she shot him in the leg,” says Chenault.

Arrest Made In Shooting

Julia Christine Wright-Dunn, 35, was placed under arrest for assault with a deadly weapon. Police have yet to release the identity of the husband. Wright-Dunn is being held on a $50,000 bond.

The victim who was transported to a local hospital remains in critical condition. Medical privacy statues prevents police from revealing certain health details. However when police arrived at the Cedar Terrace Townhomes there was a large amount of blood in the parking lot where the victim collapsed.

To date there have been no previously reported domestic violence calls to Cedar Hill authorities involving the couple.

At press time Wright-Dunn was in custody at the Tri-City Jail in DeSoto. She is being charged with Aggravated Assault with a Deadly Weapon. If convicted of the First Degree Felony, the penalty range is 5 years to life in prison, up to a 10,000 dollar fine or both.

If the husband succumbs to his injures, Wright-Dunn could face murder charges.

Until now, the Dallas County Sheriffs Department says that Wright-Dunn has no prior criminal history.