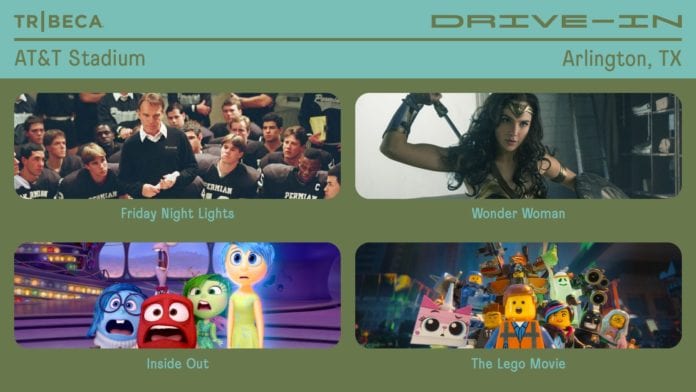 With traditional movie theaters closed due to safety precautions, drive-in movie theaters are making their comeback. AT&T Stadium is participating in the Tribeca Drive-In series this July. Families can hop in the car and catch a classic film for $26 per vehicle to $35 for a double feature.

So, what’s on the big screen? The schedule has more than 30 iconic movies and comedy acts scheduled to show on big screen outside the Stadium. Movies will often be grouped into themes, including Music Movies, Sports Sundays and Kids’ Nights.

7:00 pm Palm Springs- When carefree Nyles (Andy Samberg) and reluctant maid of honor Sarah (Cristin Milioti) have a chance encounter at a Palm Springs wedding, things get complicated when they find themselves unable to escape the venue, themselves, or each other. (90 minutes)

9:45 pm John Wick- When a retired hit man is forced back into action by a brutal Russian mobster, he hunts down his adversaries with the ruthlessness that made him a crime underworld legend.

6:45 pm Back to the Future-In this 1980s sci-fi classic, small-town California teen Marty McFly (Michael J. Fox) is thrown back into the ’50s when an experiment by his eccentric scientist friend Doc Brown (Christopher Lloyd) goes awry.

3:00 pm Inside Out- When 11-year-old Riley moves to a new city, her Emotions team up to help her through the transition. Joy, Fear, Anger, Disgust and Sadness work together, but when Joy and Sadness get lost, they must journey through unfamiliar places to get back home.

6:45 pm Spy Kids-The children of secret-agent parents must save them from danger.

9:15 pm Black Panther-When an old foe puts his homeland of Wakanda and the entire world at risk, you king T’Challa must release Black Panther’s full power to save them. (134 minutes)

6:00 pm Jerry Maguire-A successful sports agent, fired for being honorable, fights for his ideals and those who depend on him. (139 minutes)

9:30 pm- Love & Basketball- This story tells of childhood adversaries and talented athletes who have a love for the game of basketball and each other. Each pursues their dream of basketball success through high school, college and the pros, but along the way they must face their own personal hurdles. (124 minutes)

Movies run through July 26, check the website for a complete listing.

6:30 pm- Mean Girls-Cady Heron is a hit with The Plastics, the A-list girl clique at her new school, until she makes the mistake of falling for Aaron Samuels, the ex-boyfriend of alpha Plastic Regina George. (97 minutes)

6:00 pm- Be Water- In 1971, after being rejected by Hollywood, Bruce Lee returned to his parents’ homeland of Hong Kong to complete four iconic films. (97 minutes)

6:30 pm- Friday Night Lights- Based on a book by author H.G. Bissinger, the small and economically depraved town of Odessa, Texas obsesses over the local high school football team as a a means of escape.(118 minutes)

9:30 pm- Wonder Woman-Gal Gadot (Batman v Superman: Dawn of Justice) returns as the title character in the epic action adventure based on the DC Super Hero. Before she was Wonder Woman, she was Diana, princess of the Amazons, trained to be an unconquerable warrior (141 minutes)

9:15 pm- Meet The Fockers-All hell breaks loose when the Byrnes family meets the Focker family for the first time. (115 minutes)

9:15 pm-  Bridesmaids- Annie (Kristen Wiig) is a single woman whose own life is a mess, but when she learns that her lifelong best friend, Lillian (Maya Rudolph), is engaged, she has no choice but to serve as the maid of honor. (125 minutes)

2:00 pm- The Lego Movie-The first-ever full-length theatrical LEGO movie follows Emmet an ordinary, rules-following, perfectly average LEGO minifigure who is mistakenly identified as the most extraordinary person (the MasterBuilder) and the key to saving his LEGO world.

9:30 pm- Do The Right Thing- This powerful visual feast combines humor and drama with memorable characters while tracing the course of a single day on a block in the Bedford-Stuyvesant area of Brooklyn.

7:00 pm Pee Wee’s Big Adventure- When Pee Wee Herman’s most prized possession, his bicycle, is stolen, he embarks on a cross-country journey to find it.

9:45 pm Beetlejuice- A happy couple with a lovely country house die in a car accident and must haunt their old home while waiting to be processed into heaven. Too nice to be scary, they befriend the new tenant’s daughter

All tickets are available for online purchase only. Only one ticket per vehicle required, regardless of how many passengers.

Vehicles will be spaced every other parking spot or at least six feet apart. All vehicles must face forward.

Upon entering, the driver and each passenger must show that they have their own mask. Masks will be required anytime a guest leaves the vehicle.

Temporary restroom facilities will be available onsite, although it is encouraged to use the restroom before arriving. Onsite restrooms will undergo enhanced cleanings before, during and after each event.

Concessions will be available. Guests are expected to practice social distancing while waiting in line for services.

“At Tribeca’s core, we aim to bring people together through the arts to send a signal of unity and resiliency to the world during challenging times,” said Tribeca Enterprises and Tribeca Film Festival Co-Founder and CEO Jane Rosenthal. “As an immediate and safe solution, we’re excited to bring new and classic works from filmmakers, creators, and artists to communities across the country through the Tribeca Drive-In series. As the nation begins to emerge from months of quarantine, we look forward to movie theaters reopening and hope that the Drive-In serves as a reminder of the magic of the moviegoing experience.”

“The Tribeca Drive-In series is a tribute to movies and the shared experience of watching them, even if from our cars. In anticipation of theaters reopening imminently, we look back at what we love about the big screen experience,” added Tribeca Enterprises and Tribeca Film Festival Co-Founder Robert De Niro.