Ash’a Thompson Earned Her Spot With the DeSoto Eagles

Ash’a Thompson remembers when she first arrived on the DeSoto varsity girls basketball team as a freshman. Like many, she was eager to show what she could do against the experienced older players.

And while she was no ordinary freshman and was all set to earn her place on the varsity, she was nonetheless the baby in the group.

But one person in particular saw the potential, both as a basketball player and a leader, her coach, Andrea Robinson, who just happened to also be in her first season coaching the Lady Eagles varsity squad.

“She came in as the youngest kid, but she didn’t come in with a freshman mentality,” Robinson said. “She came in strong. She’s a tough kid, and as a freshman she was able to play with the big teams like Duncanville.”

Thompson, a 5-10 guard, has been a cornerstone in the rise of the Lady Eagles under Robinson. They are prepared to make a fourth-straight playoff appearance together, with a goal of winning one more game in the postseason than last year, when they finished as the Class 6A state runners-up to Converse Judson with a narrow 49-46 loss.

The Lady Eagles have been either No. 1 or No. 2 in the state all season (they were No. 2 in the latest Texas Association of Basketball Coaches rankings). At one time they were even the No. 1 team in the nation, according to USA Today.

“I feel like we’ve grown together,” Thompson said of the relationship with her head coach. “Us No. 1 in the nation? That’s crazy. But she has molded us into a really good team.’

“She’s such a good coach, and she has pushed me to get everything out of me. I’m proud that we have done this together.”

Thompson will play for Old Dominion

Ash’a Thompson signed a letter-of-intent to play for Old Dominion University next season. She’ll join a Lady Monarchs squad that as of the writing of this article was 20-3 overall and 10-1 in Conference USA.

And Robinson believes that, just as Thompson did with her as a freshman, she’ll arrive on campus at ODU ready to earn her place.

Thompson said she immediately felt at home at ODU, sort of like the feeling she got when she first met Robinson.

And, while she is a star now, Thompson said she remembers battling to the top early in her high school years, something that can also inspire younger players.

“It wasn’t easy for me as a freshman and sophomore, so I can understand where they’re at,” she said.

One of those younger players is her little sister Ayanna.

“She’s doing a very good job of staying on the court. I love playing with her,” Thompson said.

“Her little sister is going to be really good, too,” Robinson said. “I’m excited to have her for another couple of years.”

Thompson signed with ODU prior to her senior season, a decision she looks backs on as wise.

“I feel like it helped me settle down and relax. There’s nothing now to distract from our ultimate goal,” she said.

And that goal is to win the first girls state basketball championship in DeSoto history.

“We have unfinished business, and we are ready to finish,” Thompson said. “We just have to stay consistent, and when we get to the playoffs, be ready for a seven-game winning streak.” 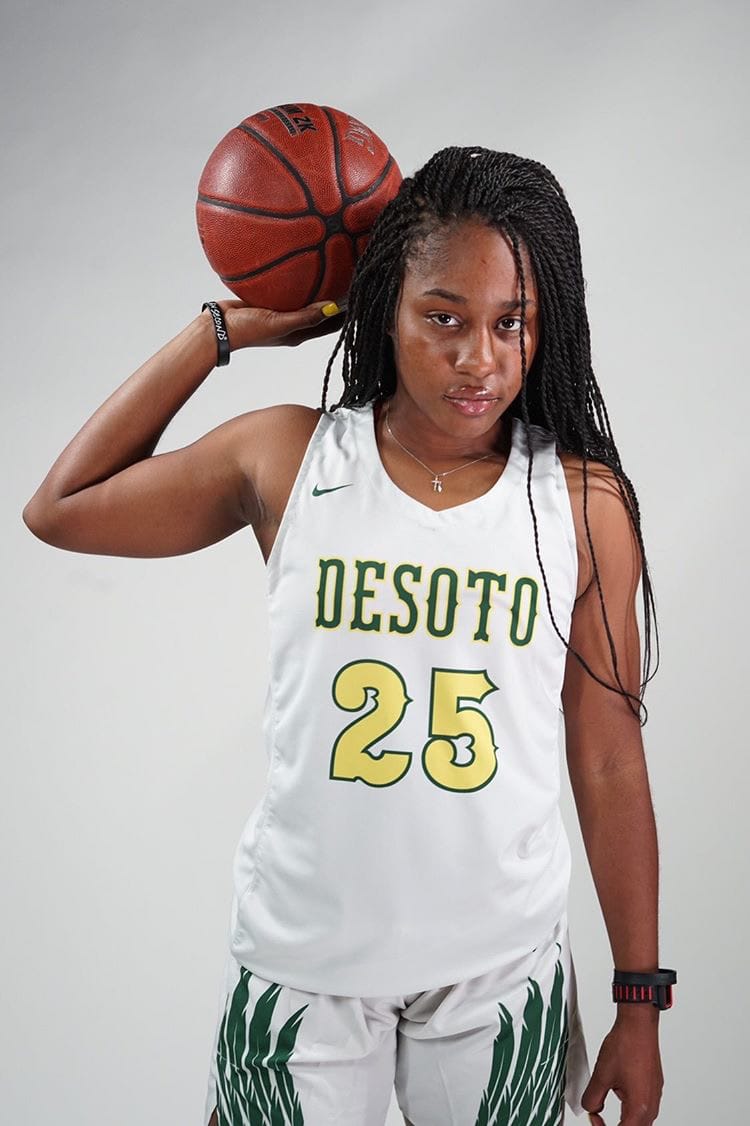