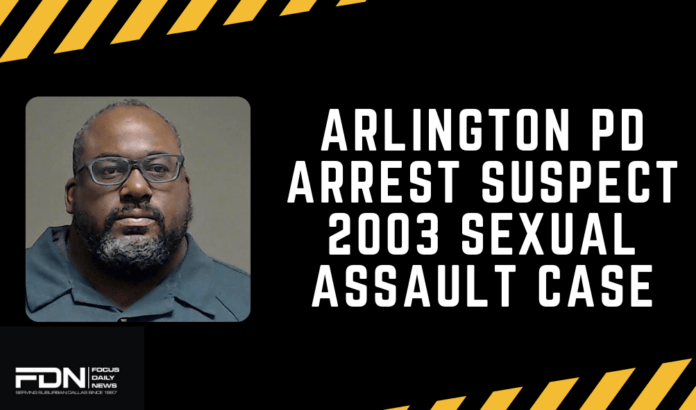 The Arlington Police Department made an arrest in a sexual assault case from September 2003 that occurred in the 2300 block of Weyborn Drive. The department obtained a DNA sample from the initial crime scene. This sample was submitted for analysis, however, no match was obtained due to limitations in technology at the time.

Through advancements in DNA forensic technology, evidence from the case was resubmitted to an accredited crime lab for further analysis. Investigators received information that DNA from the criminal case was matched to cases involving an unknown suspect in other local sexual assaults being worked in the North Texas region.

In December 2020, the primary Arlington detective assigned was contacted by the Plano Police Department. A detective in Plano provided information related to a suspect involved in a criminal case in their jurisdiction that they identified. An arrest warrant was issued by Plano Police Department and the suspect in their case was identified as a 49-year-old Jeffery Wheat.

In January 2021, the suspect was located in Crawford County, Arkansas and arrested. A search warrant was issued to obtain a sample of Wheat’s DNA for direct comparison to other potential related cases. In February 2021, the Arlington Police Department received a partial DNA report connecting Wheat as the suspect in the 2003 Arlington case. Wheat is currently being held in the Collin County Jail on one count of Burglary of Habitation – Felony Other than Theft.

“On behalf of the Arlington Police Department, I am elated we can bring closure to the victim in this case,” said Chief of Police Al Jones. “We will never give up hope to fight for victims no matter how long it takes.”