AUSTIN – Governor Greg Abbott today held a press conference at the State Capitol where he provided new information on the state’s health care capacity and issued additional Executive Orders. The Governor announced that hospital beds available for COVID-19 patients have doubled over the past week. He also detailed the joint effort between the state, the Texas Military Department (TMD), and the U.S. Army Corps of Engineers (USACE) to identify and equip additional locations to serve as health care facilities in the event that hospital capacity is exhausted. The first of these sites will be the Kay Bailey Hutchison Convention Center in Dallas.

“I am grateful for the state’s assistance. The availability of hospital beds will be crucial to saving lives in the event of a surge in COVID-19 cases,” Mayor Johnson said. “We will continue to work with Governor Abbott to ensure Dallas has the necessary resources to help us through these difficult times.”

Please note: The additional hospital space will not interfere with the homeless shelter at the convention center.

“While hospitals will remain the primary location to treat and care for those in need, we are ensuring that Texas is prepared for any possible scenario in which current hospital capacity is exhausted,” said Governor Abbott. “This joint initiative with the Texas Military Department and the U.S. Army Corps of Engineers will expand the care capacity in communities across Texas.”

According to Abbott, the corps will initially will create 250 beds. At the moment, not that many beds are needed. However, the convention center will be able to house as many as 1,400 beds if needed, according to Abbott and Brig. Gen. Paul Owen, a U.S. Army Corps of Engineers leader who has helped Texas scour for possible sites for more pop-up hospitals.

Abbott said the state would begin looking for sites for pop-up hospitals in Houston, San Antonio, Austin, the Rio Grande Valley and El Paso — wherever “COVID-19 has spread the highest” in Texas.

During the press conference, the Governor issued two new Executive Orders to protect public safety and further combat the spread of COVID-19 in Texas. In the first Executive Order (GA-12) announced today, the Governor mandated a 14-day quarantine for road travelers arriving in Texas from any location in Louisiana. The self-quarantine procedure will mirror the process outlined in the Governor’s previous Executive Order requiring mandatory self-quarantine for air travelers from the New York Tri-State Area and New Orleans, Louisiana. This mandated quarantine will not apply to travel related to commercial activity, military service, emergency response, health response, or critical infrastructure functions.

Texas Mandates Self Quarantine For Travelers From Specific Areas 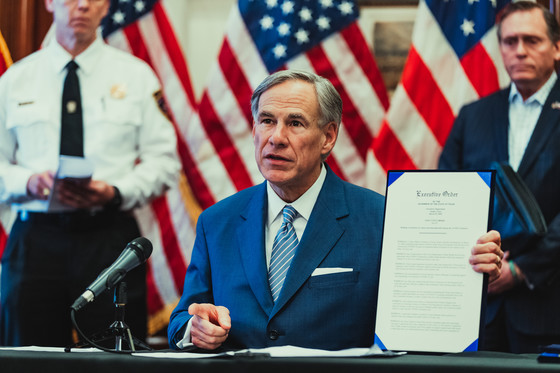