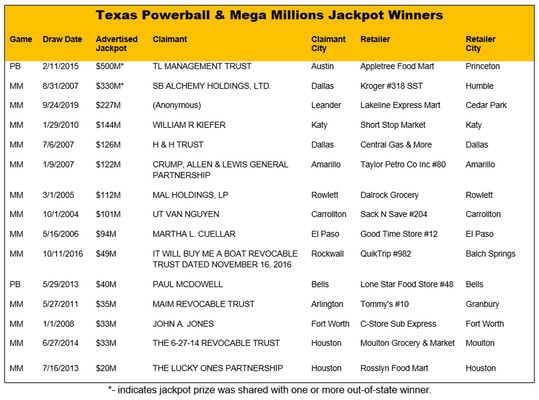 “Excitement continues to build for this growing Powerball jackpot prize,” said Gary Grief, executive director of the Texas Lottery. “We are hopeful that this Powerball jackpot is won by a Texas Lottery player. While I look forward to congratulating that winner, we want to remind our players to play responsibly. It only takes one ticket to win.”

Since joining the Powerball game in 2010, Texas has had two Powerball Grand Prize winners, including its most recent in February 2015 when TL Management Trust, Andrew Weber, Trustee of Austin, claimed a share of the $564.1 million Grand Prize with two other winners.

Powerball Grand Prizes currently start at $20 million and roll until the jackpot is won. Players win the Grand Prize by matching five numbers from a field of 69 numbers and one Powerball number from a field of 26 numbers. By choosing Power Play® for $1 more per Play, players can multiply their non-Grand Prize winnings by two, three, four, five or 10 times*. A Power Play Match Five (5+0) prize is set at $2,000,000 regardless of the Power Play number selected. All other non-Grand Prizes will be multiplied by the Power Play number selected. *The 10X Power Play multiplier is available for drawings in which the initially advertised annuitized Grand Prize amount is $150 million or less.

Drawings are broadcast each Monday, Wednesday and Saturday at 10:12 p.m. CT. Texas Lottery players can purchase Powerball tickets at more than 20,000 Texas Lottery retailers across the state. Ticket sales for the next Powerball drawing will close at 9 p.m. CT on Monday, Oct. 24. The retailer that sells a jackpot-winning Powerball ticket is eligible to receive up to a $1 million retailer bonus.