With six months until the first pitch is thrown out, the Texas AirHogs are already getting set to play ball.

On Tuesday, the Grand Prairie minor league baseball team announced its 2020 schedule, with plans for pooches, parties and an infusion of Chinese players. 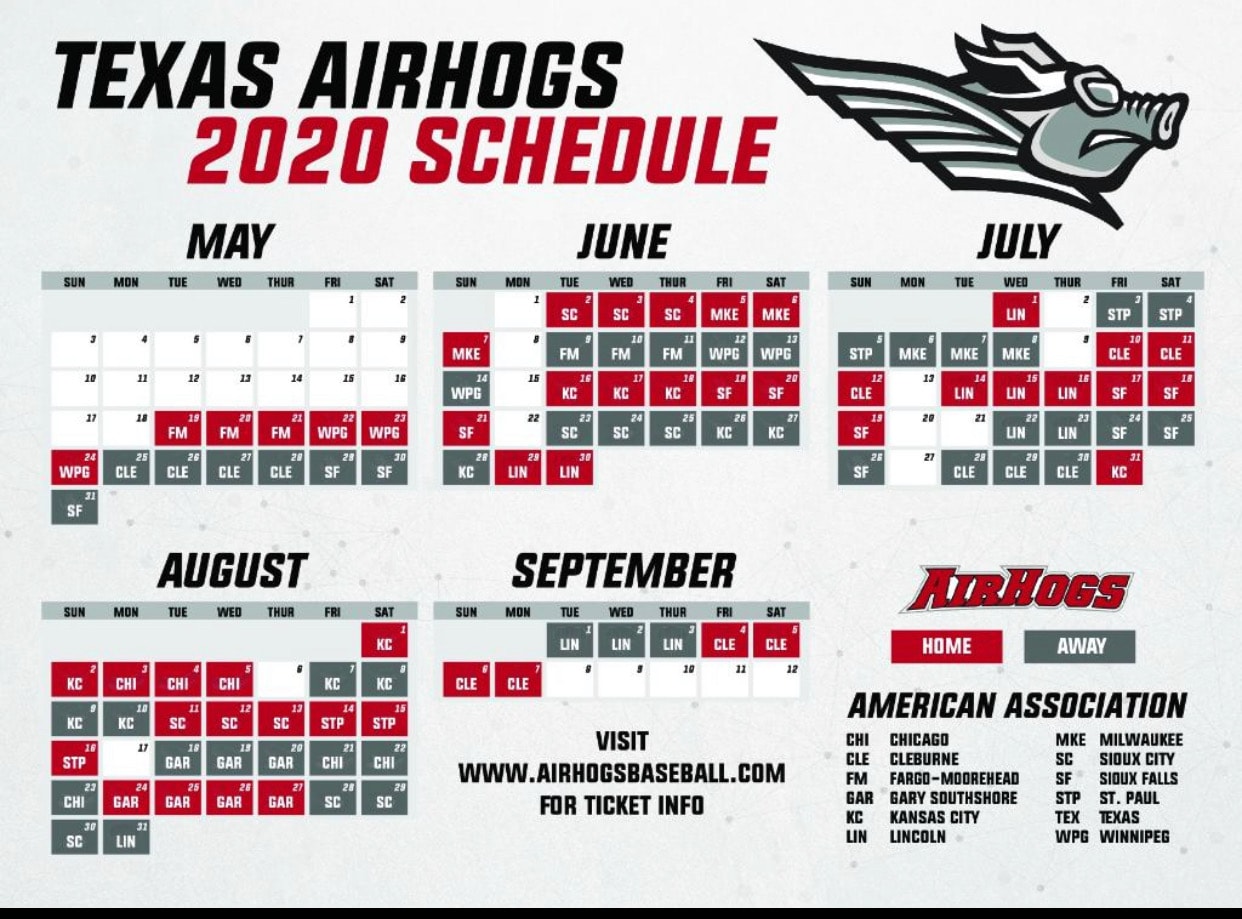 “It’s fun!” said Kelsey Armand, director of business development for the AirHogs. “It’s so up-close and personal. General manager Nate (Gutierrez) is walking around, talking to people. It’s so different than Rangers games.

“Every kid has a chance for a foul ball and an autograph from a player,” she said.
The 100-game schedule includes 50 home games, running from May 19 through Sept. 7. The prices are different from the Texas Rangers, too, ranging from $8-$12 for single game seats to $150 for a season ticket. To get an assigned seat for every home game, the cost is $400.

If the baseball isn’t enough of a draw, there’s a lot more going on at AirHogs Stadium. Mascot Scout and Princess of Fun Chloe Lewis keep the crowd involved with on-field games and giveaways. Plus, there’s almost always a specialty night planned.

Celebrate Christmas in July, Hogoween (Halloween), enjoy discounted beer on Thirsty Thursdays and get behind Scout’s 2020 Night campaign. There will also be Harry Potter Night, a salute to first responders, Disney Day and Scout’s Birthday Bash.

“New this year will be Furry Fridays, June 5, July 10 and Aug. 14,” Armand said, when fans can bring their best four-legged friends.

Too hot in the seats? Jump in the outfield swimming pool! The AirHogs rent out the pool for birthdays, team celebrations, work get-togethers, Scout parties and more. The $30 per person fee includes food, Armand said. Fans can also settle into a suite with up to 25 of their best buds for $900 (including food) or rent the Admirals or Officers Club for up to 75 people for $45 per person.

In 2018, the AirHogs formed a partnership with the Chinese Baseball Association and Shougang Sports to bring 30 players from the Chinese national baseball team to play with the AirHogs. Approximately 15 of the Chinese athletes are on the AirHogs roster at a time, Armand explained.

“We’re really excited because the Chinese team qualified for the next tournament at the Olympics,” she said. “It’s the first time they have ever qualified past the first round.
“All of their starting lineup has played for the AirHogs,” she said. “It’s the first time an international sports team has come here to play with an American team. They get experience and we get their players and sponsorship.”
The partnership led to a 28-72 record this season, which was better than the 25-75 record last year.

“We’re looking at it as we got better!” Armand said. “Experience is the key. It shows that it’s working that the Chinese team got past the first round in the Olympics.

“They are not in the Olympics yet,” she said. “They have to qualify in March. The team has to win that tournament to qualify for the Olympics. The odds of them winning that are not good, but it’s huge that they made it to the tournament.”

The AirHogs are members of the South Division of the American Association of Independent Professional Baseball. Begun in 2008 as the Grand Prairie AirHogs, a tribute to the city’s aircraft industry, the team plays at AirHogs Stadium, 1651 Lone Star Parkway in Grand Prairie.

For more information, go to www.airhogsbaseball.com.