For the admission price you get a barrel-full of entertainment venues, covering everything from illumination light displays and nightly parades to High Flying Dare-Devils. Should you just want to look, you are invited to look at the hundreds of new cars and trucks on display in the Automobile Building and other galleries around the park. Ford, General Motors, Dodge, Chrysler, Nissan, and Toyota are just some of the manufacturers who have their top of the line vehicles on display. So come look them over, kick a few tires, and sit in the front seat of luxury while many of the new auto features are explained to you by car experts. You can actually test-drive some of the GM products.

Farm animals from across the state come to be judged, with their young owners receiving thousands of dollars in prize money. They come from small towns, communities and large cities to demonstrate and parade their show animals representing money for future projects and college.

Every year I have several State Fair of Texas traditions to uphold. And most of these have to do with food. I eat at least two Fletcher’s corny dogs. First, I smear both with mustard and spend my time eating them both standing over a trash can. It is unsanitary, always alarms the bees, and is probably unhealthy for an old guy like me, but they sure taste great. Even as my arteries become clogged and my heart rate is diminishing, my mind wanders to the turkey leg that is next on my agenda. I wonder if they had corny dogs back when the fair began in 1886. I am not sure about that, but I wager that of the 3.5 million folks who attend the fair this year, most will eat a corny dog or a turkey leg. After eating all this food, I realize I still have over 70 more places to buy food. Maybe I should settle my stomach with a Root Beer and a giant dill pickle.

Before I get off of food, I’d like to recommend Baconation located in the air conditioned Tower Building operated by the Ed Campbell Concessions Company. Sizzling bacon is the best thing a Texas guy can smell. The only thing better is his sweetheart replying to that age-old ancient question ask down through the generations, by answering, “Yes, Dear!”

Sometimes I will do one or more of the 70-plus rides at the fair. My favorite is the large animal merry-go-round as I hold on to my beautiful granddaughter Gemma Leigh. Catch this ride and get a close up view of the entire fair grounds as you move along, up and down, serenaded by gay music as the passing crowd journeys among other rides and pavilions. This year I rode the Texas Star Ferris wheel. At night, from the very top you can see the beautiful lights of downtown Dallas. Even the lights of North Dallas and some of the far away suburbs twinkled back at my happy smile. But the lights I enjoy the most are those illuminating from my beloved Oak Cliff, which rest just beyond the bank of the Trinity River.

Tap Your Toes & Bring Your Boots

Then I had the opportunity to watch the Milk Parlor Demo, afterwards tapping my toes to the festive music of Ballet Folklorico. After all this activity I was hungry again, but had only two dollars left. I remembered the DAR exhibit house where they have all this interesting historical information, and where I could buy a cold can of Dr Pepper for a dollar. Another $2 dollar would buy me a hot dog on the patio next to the Old Mill Inn. With one hand grasping a Dr Pepper and the other clinching a hot dog dripping mustard and relish, I bid farewell to the State Fair of Texas by waving both hands at Big Tex.

But only for a little while, as I will return shortly, since appearing October 17th on the Chevrolet Main Stage will be Chet Stevens and on October 19 will be Sgt. Pepper & Lonely Bluegrass Band. Providing another opportunity to eat fair foods, fill my spirit with country music, and my eyes with pretty Texas ladies. 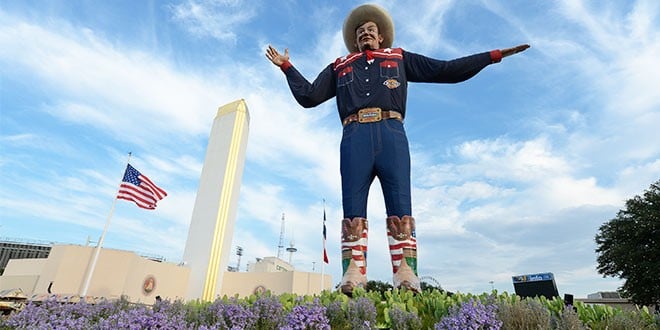 The Musical Comedy Murders of 1940 at Artisan Center Theater