First responder Joseph Urias Wears Many Hats In The Community

The 32-year-old, who was born and raised in Waxahachie and still lives there, works for the Hillsboro Department of Public Safety. He has been a certified police officer since 2014. He is also an arson investigator, instructor at Navarro College, a triple-certified first responder (firefighter, EMS, police officer) and a volunteer firefighter.

All this after his original ambition was to study political science at Texas A&M University. He ended up graduating with a degree in psychology and sociology.

“I wanted to enter a fun and exciting career field and immediately thought of the fire service. In Texas, to be certified as a firefighter, you have to have medical training, so I started my emergency medical training at Navarro College,” he said. “I also began volunteering at a local volunteer fire department to get an insight into my future career.

After working in the fire service for a couple years he knew he wanted to continue his training in public service, so he put himself through the police academy.

He also teaches a host of topics at Navarro College, including the police academy, EMS classes and has been in charge of various special events. He’s even lectured for the nursing program.

“I knew I wanted to be trained to enter any type of emergency and have the tools, training and knowledge to be able to handle any of those emergencies and not have to wait for the police to clear the scene,” Urias said. “I wanted to be first on scene and to be able to make a difference immediately.”

And when it comes to juggling it all, “A calendar is a must,” he added with a smile.

“There are a lot of days where I do not get much sleep, but the bigger picture is worth the sacrifice. When I feel my batteries are running low, I make sure to take time to rest and schedule a vacation if needed.”

Firefighter/paramedic and EMS Coordinator for Navarro College, Chris Waller, understands wearing several hats. But he says he finds himself in awe of his friend Urias’ many talents.

In his career he has dealt with gunshot victims, stroke patients, diabetic emergencies, CPR unresponsive patients, car accidents and other various medical and trauma emergencies. He has also worked the streets as a patrol officer responding to various calls of service. Those include domestic disturbances, burglaries, thefts, robberies, DWIs, narcotic sales/possession, assaults and car accidents, along with performing traffic enforcement and routine patrolling.

He carries a medical bag with him in his police Tahoe to provide initial medical care before the ambulance arrives. And, if a fire call comes out while he is on patrol, he can respond. Urias also carries firefighter gear with him, in order to assist at the scene.

“Joseph has had a desire to help those in need since grade school, and I believe it shows best through his continued education and multiple certifications to serve the community,” longtime friend Will Davis said. “He has dedicated hours upon hours in classrooms not only in his development as a student to serve the community but also as an instructor to teach and shape others so they can go out and do the same.”

Finds time for his friends

He’s also one of the greatest friends a person could ask for, said K9 officer Jon Rodgers.

“Joseph is one of the most caring, down-to-earth people I have ever come into contact with. Not only is Joseph a hard worker, he is a great friend,” Rodgers said. “If I am ever having a bad day I can count on Joseph to hear me out, and even make a joke or two that can make me laugh even when I do not want to.”

“I’ve owned three Mustangs, and my current one is a Shelby GT350 R. I love going to car shows and meets to show off the car and hang out with others who enjoy the same hobby,” he said. “When I first met my future wife, Sarah, she had two dachshund dogs and I had a maltipoo. Sarah got me involved in animal rescue and we ended up with two foster fails.”

“All five bring us so much joy and laughter. Now, we have Pikachu, Oscar, Bella, Cardi-D, and Lo.”

Urias credits the values and ethics taught him by his parents for his desire to help others.

“I grew up in the legal field with my mother working for the county in different capacities within the district attorney’s office in Ellis County,” he said. “In my extended family, my aunt is a doctor, my cousin is now a deputy in west Texas, and I have an aunt and uncle who both recently retired from customs and border patrol. Now, my sister is also a probation officer here in Ellis County.”

And through it all, he’s humble.

“I do not think of myself as an inspiration to others, but if I am told that I inspired someone then I am completely humbled and honored to have had that lasting effect on someone’s life,” he said. “I think I can be an example that if you put your mind to something you can truly accomplish your dreams.” 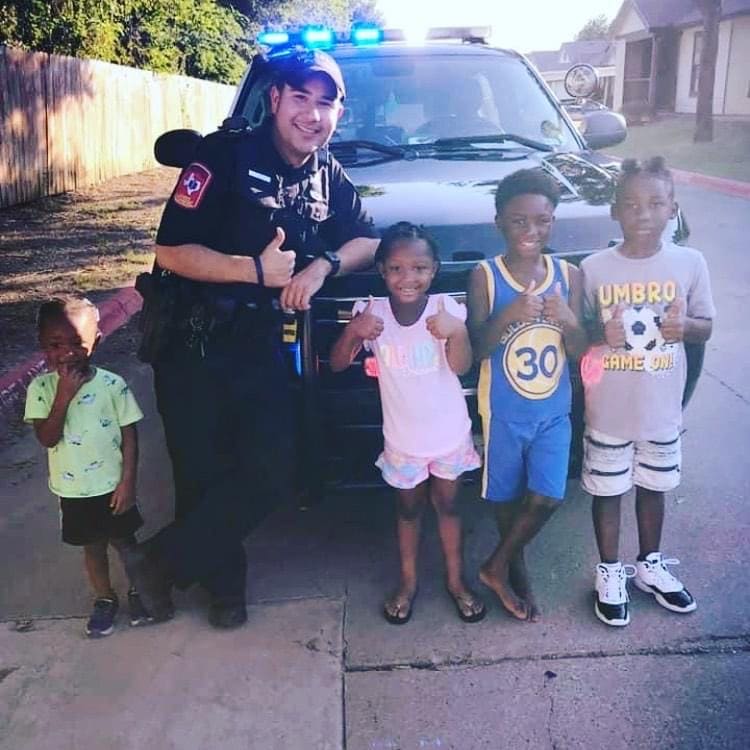