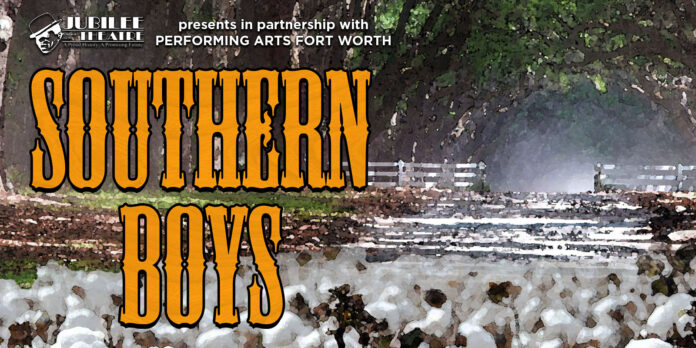 Jubilee Theatre and Performing Arts Fort Worth have partnered to co-present “Southern Boys: Sons of Sharecroppers” at Bass Hall July 29-Aug. 15. The highly acclaimed musical stage production is written by Kathy D. Harrison, and directed by D. Wambui Richardson. With musical direction by Steven A. Taylor, live-in-person performances run through Aug. 15 at Bass Performance Hall. The show continues to stream through August 29 at jubileetheatre.org.

“What a tremendous culmination to a 40th Anniversary Season in pandemic mode,” said Christie M. Howard, Jubilee Theatre’s Managing Director. “Jubilee Theatre is elated to have the opportunity to perform our work on the Bass Hall stage. Sharing a story about perceived victory, surprising challenges, and unyielding perseverance is more than timely as these are the themes that are resonant in the very spirit of Fort Worth’s rich performing arts community.”

“The stage is no longer dark,” Howard added. “A heartfelt thank you goes to Dione and her staff for seeing value in showcasing diverse perspectives through various mediums of artistic expression.”

Harrison’s musical brings to life the beginning of America’s historic post-slavery era. Emancipated slaves and their free children find jubilant excitement and debilitating realities. President Lincoln has signed the Emancipation Proclamation and the North has won the Civil War. Reconstruction has begun, and those freed are ready to transition from slavery to freedom.

In an ironic twist, their first opportunities come as sharecroppers on the very plantation where they were enslaved. The brutal and demeaning conditions of sharecropping take a toll on their aspirations to realize real freedom. Is going from slavery to sharecropping like going from the frying pan into the fire?

As hopes and dreams start to dissipate, only 17-year-old Johnny dares to keep on dreaming. When he hears the loud horn of a train approaching near the fields, heading north, will he catch that train? If he jumps on, and into a new, unknown world, will anyone follow?

“We are thrilled to partner with Jubilee Theatre to present Southern Boys at Bass Performance Hall,” said PAFW President & CEO Dione Kennedy. “This is a collaboration that we’ve been talking about for several months and we’re excited to see it come to life this summer,” Kennedy added. “Our teams are working together on the production’s technical aspects, as well as marketing and communications, front of house operations and ticketing. This also marks the return of welcoming audiences back into Bass Hall and we’re delighted to join forces with Jubilee Theatre to signify the official reopening of Bass Hall.”

Jubilee Theatre also gives special thanks to the Ann L. & Carol Green Rhodes Charitable Trust to serve as Headline Sponsor for Southern Boys North Texas appearance. “Southern Boys” will be the final production of Jubilee Theatre’s historic 40th season. Jubilee Theatre will soon announce the lineup for its 41st season, beginning in September. Tickets are now on sale for “Southern Boys: Sons of Sharecroppers” at basshall.com or jubileetheatre.org.

Bass Performance Hall, owned and operated by Performing Arts Fort Worth, is located at 525 Commerce St. in the heart of Sundance Square in downtown Fort Worth. For information about the enhanced health and safety protocols that will be in place at Bass Hall, please visit basshall.com/reopeningplans.