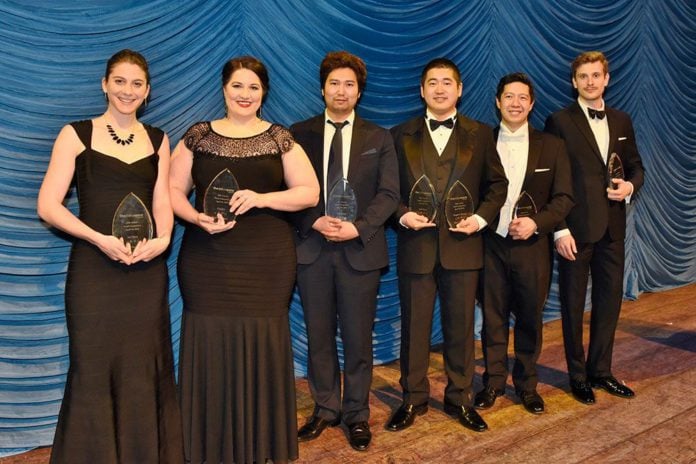 After two days of intense competition by some of the most talented young singers in the country, the winners of the 28th Annual Dallas Opera Guild Vocal Competition were announced late this evening from the stage of the Margot and Bill Winspear Opera House at the AT&T Performing Arts Center:

A total of 336 applicants from 39 states applied to compete in this year’s competition, from which 20 semi-finalists were chosen. These singers competed on Friday, April 29 for the coveted position of finalist. That group consisted of Polish bass Daniel Miroslaw, soprano Alexandra Loutsion and bass Adam Lau, in addition to Mr. Jin, Mr. Wang, and Ms. Verrez.

“What stood out to me from the beginning of this competition,” explained the Kern Wildenthal Dallas Opera General Director and CEO, Keith Cerny (a member of the judges panel), “was the extraordinarily high level of candidates we attracted this year, and the phenomenal singing and acting talent each of these young men and women brought to the Winspear Stage. These are polished performers with great futures in their chosen field.”

The six finalists performed earlier this evening in the Margot and Bill Winspear Opera House at the AT&T Performing Arts Center with The Dallas Opera Orchestra under the baton of acclaimed Mrs. Eugene McDermott Music Director Emmanuel Villaume.

“As Co-Presidents of the Dallas Opera Guild, Jana and I count it such a privilege to participate in this nationally significant competition and are ecstatic for today’s winners,” said Dallas Opera Guild Co-President Mac Irwin. “We congratulate all of those who took part in this highly competitive event. The talent exhibited this weekend was truly remarkable. Our hope is that the prize money, accolades and awards will greatly assist these young, dedicated singers as they continue to strive for successful careers as performers.”

Third Place winner Sol Jin was recently selected by Opera News as one of the magazine’s “25 Rising Stars.” He made his opera debut two years ago with Long Island Opera Company, singing the role of Germont in their production of La traviata. He has a degree from Yonsei University and earned his Master’s from The Manhattan School of Music. He is a 2016 winner of the Metropolitan Opera National Council Auditions and will join Houston Grand Opera as a Studio Artist next season.