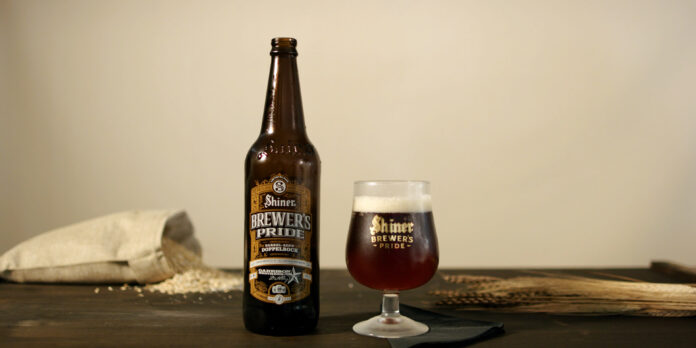 Shiner, TX (July 6, 2022) Good news my fellow bourbon and beer loving Texans, today, the independent, family-owned makers of the iconic Shiner Bock announce a new 24 oz. Barrel-Aged Doppelbock made in collaboration with Garrison Brothers Distillery. Garrison Brothers is a renowned Texas-based distillery known for Texas Straight Bourbon AND one of my favorite Texas distilleries. I’m stoked about this collaboration and limited release Doppelbock.

The Barrel-Aged Doppelbock is the first of five in the Brewer’s Pride 2022 series, a line of exclusive brews crafted by our Shiner Brewmasters to honor Shiner’s most devoted fans.
Barrel-Aged Doppelbock is carefully crafted with Two-Row Premium, Copper and Chocolate Malts, as well as Golding Hops, then aged in the ex-Port casks that were then used to create Garrison Brothers’ Guadalupe Bourbon. The combination of unique flavor and slow aging in the one-of-a-kind casks results in bold and innovative flavors that will appeal to connoisseurs.

As the first release in the launch of the updated and highly sought-after Brewers Pride line, the Barrel-Aged Doppelbock (12% ABV) is expected to sell out in a matter of days. So where can you find this brew? They go on sale today, July 6, in 24 oz individual bottles at a suggested retail price of $19.99.

Available for purchase at major Shiner retailers in Texas including HEB, Kroger and Total Wine. Get it while you can before it sells out for good! For more information on Shiner Beer and its full portfolio, visit www.shiner.com.

“We’re thrilled to join forces with such a renowned Texas distillery for this special, limited-time brew. We hope to continue to raise the bar for our loyal Shiner fans with the one-of-a-kind offerings in our Brewer’s Pride line. Stay tuned for more exciting releases this year,” says Jimmy Mauric, Shiner Master Brewer.

“We are honored that Jimmy and his team at Shiner chose to partner with Garrison Brothers Guadalupe barrels for the first release of the Brewer’s Pride 2022 series. Doppelbock, known for its rich, sweet and malty notes with hints of chocolate and dark fruits, is perfect for our wet ex-port cask,” says Donnis Todd Garrison, Brothers Distillery Master Distiller.

The Barrel-Aged Doppelbock kicks off a series of ultra-premium, unique beers in Shiner’s exclusive Brewers Pride line for 2022. For this high-end line of brews, the Shiner Brewmasters have challenged themselves to source unique ingredients and develop innovative brewing techniques to craft creative beers for our fans to sip and savor. More exciting news to come!

About Shiner and the Spoetzl Brewery: The Spoetzl Brewery was founded in Shiner, Texas (population 2,069), in 1909, by Czech and German immigrants brewing beer with old-world traditions and recipes for Central Texas. Since then, the brewery has grown to be one of the largest independent craft brewers in the country with beers available in all 50 states and Mexico. To this day, every drop of the award-winning beer is brewed right in Shiner, TX, where it all started 111 years ago. Visit us at www.shiner.com.

About Garrison Brothers: Garrison Brothers Distillery is a small farm and ranch located in the beautiful Texas Hill Country that authentically produces straight bourbon whiskey. Garrison Brothers introduced the first bourbon whiskey legally made in Texas in 2010 and has since developed a rabid fan base. They currently have a waitlist of more than 18,000 just to volunteer on bottling days, and their Cowboy Bourbon® normally sells out within hours of its release.

Garrison Brothers is the first legal bourbon distillery in Texas history and is one of the first distilleries in America outside of Kentucky to produce authentic, handmade bourbon whiskey—and only bourbon whiskey Every expression of Garrison Brothers bourbon is made from a sweet mash bill and barrel-aged in the intense Texas climate. The extreme heat creates multiple aging seasons in a year, resulting in a darker, richer, and fuller bourbon; bolder than almost any other bourbon on the market. Garrison Brothers is a proud and active member of the communities of Blanco, Fredericksburg, Hye, Johnson City, and Stonewall.

The distillery and its barrel barns are open to the public for tours in Hye, Texas. Anyone interested in learning more about Garrison Brothers Bourbon or in taking a tour of the distillery should visit garrisonbros.com or follow @garrisonbros on Facebook, Twitter, and Instagram.