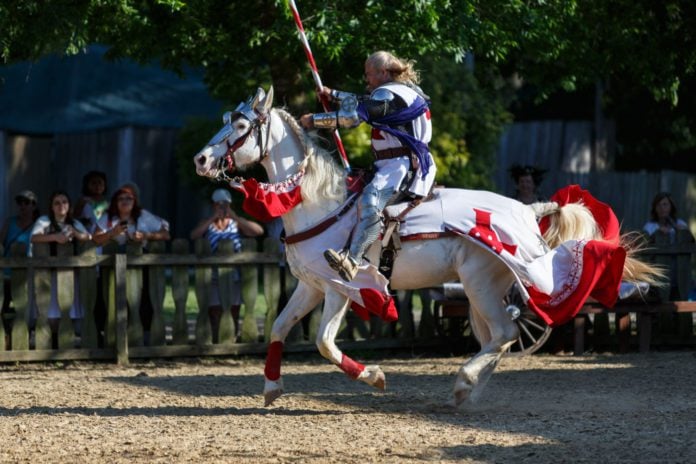 WAXAHACHIE—Tuesday, March 14, 2017 at approximately 3:45 pm a fire broke out at the Scarborough Renaissance Festival site. First responders arrived at the site within 5 minutes of the fire being discovered, and it was contained within 30 minutes.

Ellis County Fire Marshall Tim Birdwell determined that the fire started in the electrical system of the building destroyed.

“We are extremely grateful that no one was injured and that only two structures out of the 200 plus buildings at the Scarborough site were affected by the fire,” said Scarborough Spokesperson Helaine Thompson.

The Pendragon Costume shoppe (and it’s free standing building) is owned by Nicole Fullerton and Shawn Carnes. Fortunately none of the stock of handmade Renaissance style apparel was at the shoppe at the time of the fire.

“Pendragon Costumes has been a part of Scarborough Renaissance Festival for 23 years,” said Thompson. “We will work with the owners and their local artisan and longtime shoppe manager, MaritaBeth Caruthers, to enable them to open their shoppe in a temporary structure for the upcoming season.”

A “YouCaring” page has been set up to help Pendragon Costumes with the costs associated with the loss of their building.

The fire will not affect the opening of the 2017 Scarborough Renaissance Festival® season scheduled for April 8, 2017. The Festival’s 37th season will run weekends April 8 – May 29, 2017.

Scarborough Renaissance Festival® is located just 30 minutes south of the Dallas/Fort Worth Metroplex off of I-35E at exit 399B on FM 66 in Waxahachie, TX.