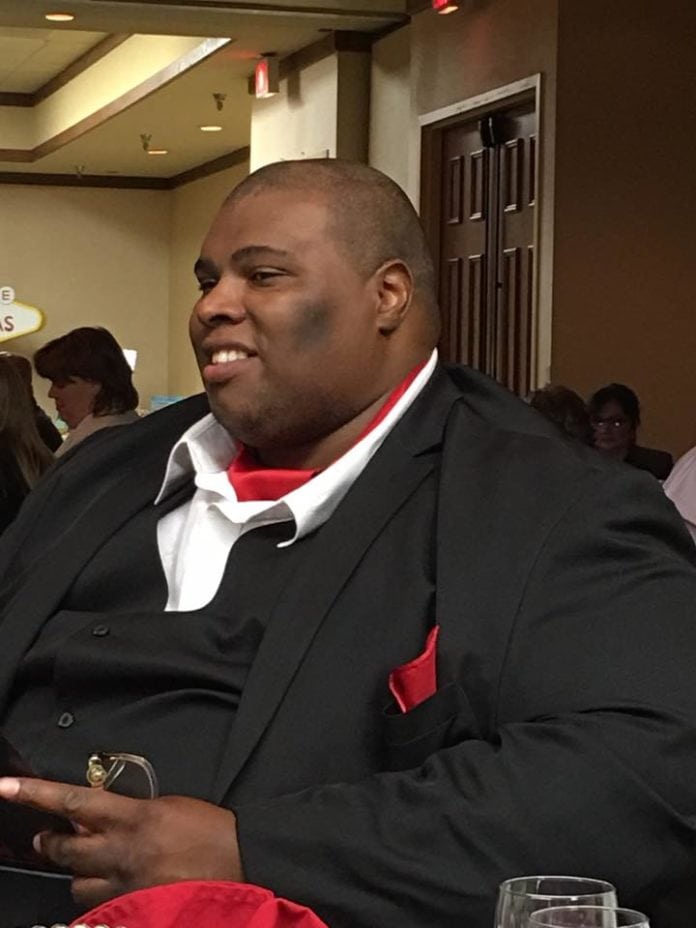 How does a wordsmith run out of words? No, I’m not speechless, I could talk about our friend and editor’s merits for days. However, with the news of Josh’s passing, the sadness has depleted my word bank. The loss of Joshua is in many ways immeasurable. I never imagined sitting at his desk and doing my best to pay tribute to him.

I often described Joshua as the “gentle giant”. Even with his intimidating size, there was nothing threatening about Josh. He had a way of putting anyone and everyone at ease. Blessed with the ability to handle difficult situations with decorum and grace, he was able to improve any situation.

I first met Joshua Johnson in March of 2007. We were looking for an editor who could do everything … write, edit, lay out the newspaper, send the pages of the newspaper through the equipment which magically turns the pages from digital ones and zeros to hard images on what are referred to in the business as “plates.”

From there, a pressman takes over and does some more magic turning those plates into ink on paper.

Joshua had a very impressive record with the newspaper he was working for at the time so we made him an offer. Fortunately for us, Joshua accepted, and the second week of April took his place behind the desk he would call home for the next 12 years.

Over that time period, Joshua became not just a member of the Focus Daily News family, but an integral part of the communities in southern Dallas County and northern Ellis County.

I have never met anyone, whether from city governments, local school systems, Chambers of Commerce, businesses, churches, or accounts who have advertised over the years who did not have wonderful things to say about Joshua. In some way or another he had a positive impact on everyone he encountered.

Joshua’s talent did not stop with the written word. In every part of life, there are people with bad attitudes who attempt to spread their ill will to those around them. Joshua always had the knack of quieting them down and putting everyone at ease. He handled all situations I witnessed with decorum and grace.

I remember one instance when a delivery driver entered the office and saw a certain political poster. He immediately “lit into Joshua” about politics.

As only Joshua could, he put the driver at ease and they almost became friends. To this day, I can’t really remember how he did it – only the result. Joshua handled every occasion with that kind of diplomacy. I can only wish I could handle all situations as well as he.

Since those early days in 2007, Joshua kept doing more and more to serve the newspaper and the community. He would see me literally pulling my hair out (yes, once I had hair) over the tedious task of counting and billing out the legal notices placed by local cities. It’s a thankless, but very necessary job.

He started pulling each paper where a legal notice appeared and measured it according to the instructions of the government entity placing it. From that moment forward, I would find the entire job done and on my desk every month.

In 2010, I had a number of heart attacks and had to be hospitalized for quintuple bypass surgery. I spent a couple of weeks in the hospital, much of which was in intensive care. Joshua took over all aspects of newspaper management in my absence and in the months thereafter while I slowly recovered.

He didn’t do it for the money. God knows, there isn’t much money in local newspapers – he did it because of who he was – no longer what he was hired to be, an employee, but a trusted member of the family and the best friend a person could have.

And he did it well. Joshua was an award-winning Editor at Focus, recognized most recently for his legal reporting. But he didn’t enter competitions for fame, he entered so he could learn where we could improve the paper. He had a thirst for knowledge and a vision for personal and professional growth.

The week since Joshua has been gone has been the toughest week I can remember in my adult life – and there have been some really bad ones. I have found myself breaking into tears on many occasions, often when having to tell someone else about Joshua’s passing. It is too hard to believe that someone so vibrant and full of life could be gone.

There is not one person on the small Focus’ staff who did not break into tears when they learned of his passing. We all keep thinking this must be a week that is just a bad dream – a dream we will wake up from. Why can’t this just be a bad dream and tomorrow we can walk into the offices and find Joshua sitting at his desk hard at work with his easygoing smile and positive attitude…

We will never be able to provide an adequate tribute to his memory, but we are trying as we put together this special issue, with comments from many of the people he touched throughout his all-too-short life.

Perhaps I can say it, using the same analogy I used when I told our children about his passing. They both broke down, crying uncontrollably. I said, “God must have needed Joshua more than we did. Rest assured he is now at God’s side and doing his bidding in heaven, just as he did it here on earth.”

Joshua – We Love You! I love you! I don’t know of anyone who has met you, who didn’t love you.

“Until We Meet Again!”