We recently spent a few days exploring Garland, a city I thought I already knew very well. My husband and I visit Garland at least once a month, since we have a number of friends and even a few relatives living there.

But on a recent stay hosted by Visit Garland, we learned that we’d only just begun to explore this historic North Texas city. I had no idea, for instance, that Garland is now the ninth largest city in Texas. They have an amazing 63 parks, plus three championship golf courses. Another big plus for Garland is its proximity to scenic Lake Ray Hubbard, a short drive east on I-30. Even if you don’t like boating, fishing, or windsurfing, there’s great food and fun to be found at restaurants like The Flying Saucer, whose patios overlook the lake.

Garland’s performing arts scene has been thriving for years, raising the bar high for other suburban cities with Garland Civic Theatre and Garland Summer Musicals (GSM). Their critically-applauded musical productions draw theater fans to the city throughout the year. After missing 2020 due to the pandemic, GSM returns in June and July with two classic Broadway musicals, all produced with local talent (“Grease” and “Nine to Five”). Their shows will be at the Granville Performing Arts Center in June and July. The PAC is located just a few steps from the DART stop, which helps draw visitors from across the Metroplex.

The city is also justifiably proud of its culture and history. Visitors are invited to learn more about Garland’s heritage at the Landmark Museum, housed in the 1901 Santa Fe Depot at Heritage Crossing. The crossing consists of four quadrants of land at Sixth and Walnut Streets in Downtown Garland. The Landmark Museum, a refurbished 1910 Pullman Coach Car, and the 19th Century Tinsley-Lyles House take up the southwest quadrant of the intersection.

Walking paths with markers describing Garland’s history make up the other three quadrants of Heritage Crossing. Garland Railroads, the museum’s current exhibition, teaches visitors about the importance of the rails to Garland’s past and present. 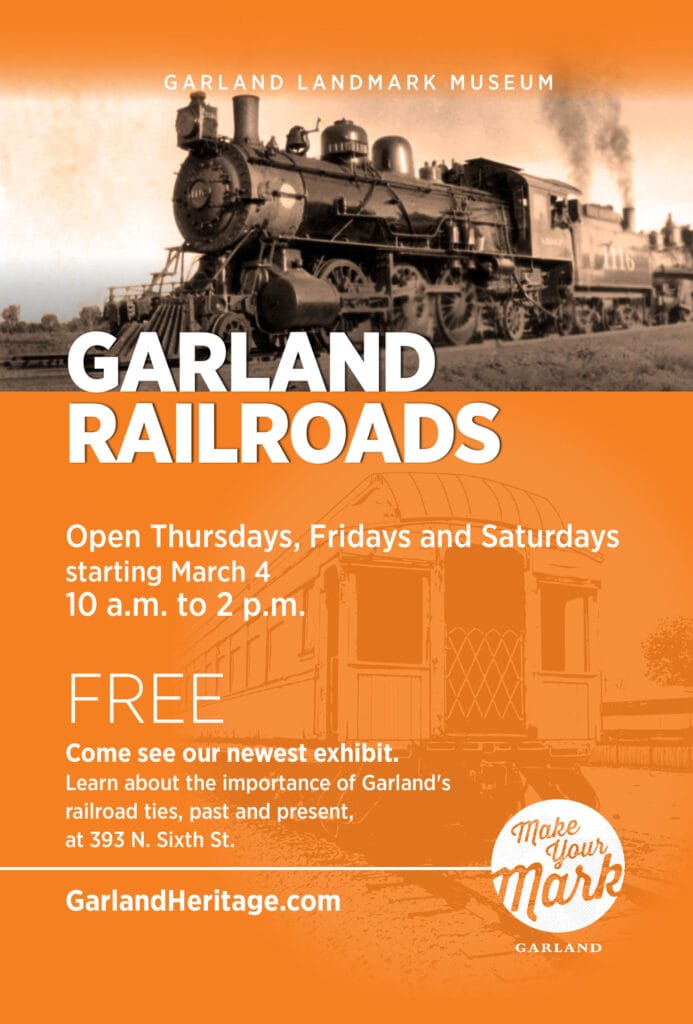 Railroads helped turn Garland from a small agricultural village into one of the largest cities in Texas with a thriving manufacturing economic base. The Landmark Museum also displays local artifacts from early settlers, old newspapers, farm tools, quilts, clothing, commerce and industry and more. The museum, 393 N. Sixth Street, is open every Thursday, Friday and Saturday from 10 a.m. to 2 p.m., or by special appointment. For information, visit Heritage@GarlandTX.gov.

Hidden Garland is another program that helps educate visitors (even those like me who think they “know” Garland) through a scavenger hunt in downtown Garland. The program is available through the Landmark Museum, and helps people find hidden clues to Garland’s history.

Kimberly Nurmi, Heritage Crossing Coordinator, said “This program is great fun and can be done through the Visit Garland app or with printed clues you pick up at either the museum or the Visit Garland office on Fifth St. You use clues to find the hidden items, take pictures of them on your cell phone, and then bring the photos back to either the museum or the Visit Garland office. If all of your pictures are correct, you win a prize. I think the most interesting thing about this program is it will make you slow down and notice things you may have walked by a thousand times without giving them a second thought.”

On our recent stay, we learned the city has also become known as a Beer & BBQ trail destination, with several topnotch breweries and even more BBQ joints. We had a great time at local favorite Intrinsic Smokehouse Brewery & BBQ, located on the historic downtown square. I’m no beer expert, but their house-brewed Kolsch craft beer was really good. And their BBQ brisket is addictive, next time I’ll take a half-pound ($9) home with me.

We also visited the Lakewood Brewery, housed in a state-of-the-art facility on Executive Drive. This award-winning brewery features a very popular tap room and outdoor beer garden, and is a great place for private events. Since it was happy hour in the taproom, I ordered a Taster’s Flight. Unlike Intrinsic’s four-sample flight, Lakewood Brewery’s brew master brought out six samples. That was about four more than I could manage, but my favorites were their anniversary ales: Lions Share VII (Sauv Blanc Barrel Saison aged in California Sauvignon Blanc barrels) and Lions Share VIII (Rhum Barrel Russian Imperial Stout).

With so much to see and do, plan to spend the day or a weekend in Garland to experience everything unique the city has to offer.