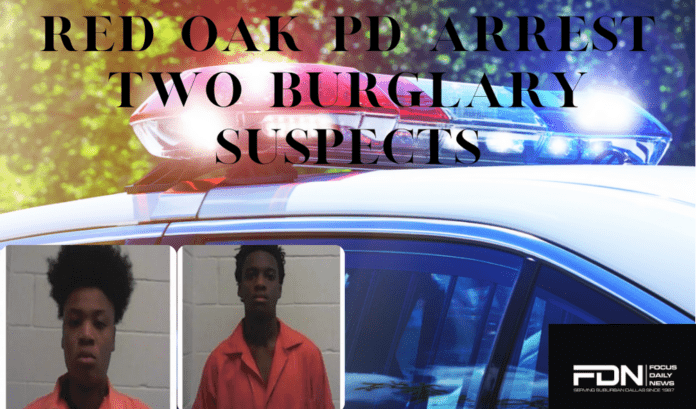 On Thursday, September 16th, 2021 at 5:08 PM, Red Oak Police Department personnel were dispatched to a burglary of a habitation in progress in the 200 block of Brooks Court in the Waterview Farms subdivision.

The homeowner advised that he was not currently at home, but his alarm was going off and that his interior camera had been disabled. Officer Bicknell of the Red Oak Police Department was already in the subdivision and stated that he would be enroute to the address.

After a short vehicle pursuit, the female subject was taken into custody with the assistance of Officer Trim and Detective Nelson.

Shortly thereafter, the other Red Oak Police Department personnel located the male subject hiding in the backyard of a residence in the 100 block of Waterview Parkway. A loaded AK-47 pistol was recovered from the suspect vehicle during the inventory of the vehicle. All property from the residence was recovered and returned to the home owner. Both subjects were arrested and booked into the Red Oak Police Department jail without further incident.

The female subject was identified as Flowers, Courtnie B/F (18 Years of age) of Dallas, Texas.

The male subject was identified as Barber, Deuntea B/M (18 Years of age) of Dallas, Texas.

The subjects have been arraigned on the offenses and are awaiting transfer to the Wayne McCollum Detention Center by the Ellis County Sheriff’s Office. The Red Oak Police Department would also like to say thank you to the Ovilla Police Department personnel which assisted during the investigation.