It’s been 53 years since Texas race-car designer Carroll Shelby helped Ford Motor Company astonish the world by winning at Le Mans in 1966. The exciting auto race is back in the news, thanks to 20th Century Fox’s new film. “Ford v Ferrari” stars Matt Damon and Christian Bale, and opens in theaters everywhere Nov. 15.

Ford’s historic win at Le Mans led to their follow-up win in 1967 and GT’s dominance through 1969. Lerner details all the bumps along the road in Ford’s GT program. The book covers GT40’s competitive seasons in 1968 and 1969, and Ford’s triumphant return to Le Mans in 2016.

Back Story: Henry Ford II was upset when his bid to buy Ferrari was rejected by Enzo Ferrari. He wanted to win at Le Mans primarily to “beat Ferrari.” Ford designers used UK-based Eric Broadley’s Lola GT, a cutting-edge car that featured a mid-engine chassis and small-block Ford V-8 power, as the basis for their Ford GT. Carroll Shelby helped shape it into the “Mark II” GT40. The result was one of the most legendary wins in racing history: Ford’s 1-2-3 sweep of Le Mans in 1966 led to their GTs winning Le Mans each year through 1969. 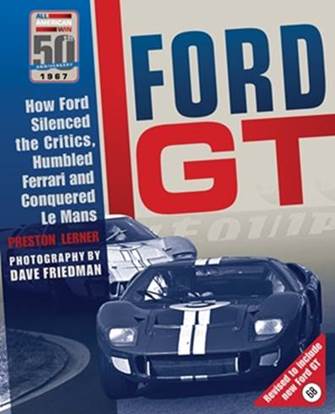 The Complete Book of Jaguar

An essential guide to an important chapter in the history of sports and luxury automobiles, starts with a small company in Coventry, England, who launched a sporting saloon (i.e., sedan) called the Jaguar SS. This set in motion a process leading to one of Britain’s most beloved line of high-performance automobiles. The Complete Book of Jaguar covers the SS and all of the Jaguar’s subsequent production models. Featured along with the original SS Jaguar are today’s F-Type sport cars, F-Pace SUV, X-Type sedans, as well as concept cars.

Author Nigel Thorley’s chronological book has entries for each year along with information about the cars and technology. Spec tables highlight key technical and performance info. Thorley’s interest in Jaguar led him to own 61 models since the age of 17. He has written 20 Jaguar books and edits Jaguar Enthusiasts Club monthly magazine, “Jaguar Enthusiast.”

Back story: Motorcycle enthusiasts William Lyons and William Walmsley started a firm called the Swallow Sidecar Company in 1935 that eventually led to Jaguar. In England’s bleak postwar years, Jaguar became a shining star—first with its XK120, followed by the XK140 and XK150. Sporting sedans like the Mark 2 and Mark X set the bar for luxury four-door transport in the ’50s and ’60s. Then Jaguar’s beautiful E-Type in 1961 was a genuine 150 mph super car. Along the way, the company competed on road courses around the world, going head to head with greats like Ferrari and Aston Martin. Though Jaguar sometimes lost its way, it is bounding back with a strong lineup like the new F-Type sports car and F-Pace SUV.

The coffee table book contains 256 pages with 350 illustrations. It was published Sept. 17 by Quarto Motorbooks and sells for $60. For more information, visit QuartoKnows.com.

“The Complete Book of Porsche 911”

Porsche’s fabled 911 represents the ultimate expression of Ferdinand Porsche’s original vision of the perfect sports car. In “The Complete Book of Porsche 911,” author and photographer Randy Leffingwell gives readers an overview of Stuttgart’s most famous car. From the original 901 prototype to today’s technologically advanced GT2 and GT3 derivatives and the latest 992-generation 911. He highlights the racing, prototype, and limited-production cars and offers the most complete reference available to these top-tier sports cars.

From the air-cooled cars of 1963 to 1998, to the water-cooled 911s of 1998 to present day, the author provides info on the evolution of this iconic sports car, offering detail craved by Porsche enthusiasts. Illustrated with images from Porsche’s historical archives, complemented by the author’s photos, along with detailed technical specification tables, The Complete Book of Porsche 911 offers a thorough account of one of the most beloved enthusiast cars ever produced.

Author Randy Leffingwell wrote his first book, American Muscle, in 1989 while still on staff at the Los Angeles Times. Since then, he has authored 47 titles for Quarto Motorbooks and Voyageur Press. The beautifully illustrated book is 344 pages, with 450 illustrations, published July 30, 2019. “Porsche 911” is available for $50. For information please visit QuartoKnows.com.