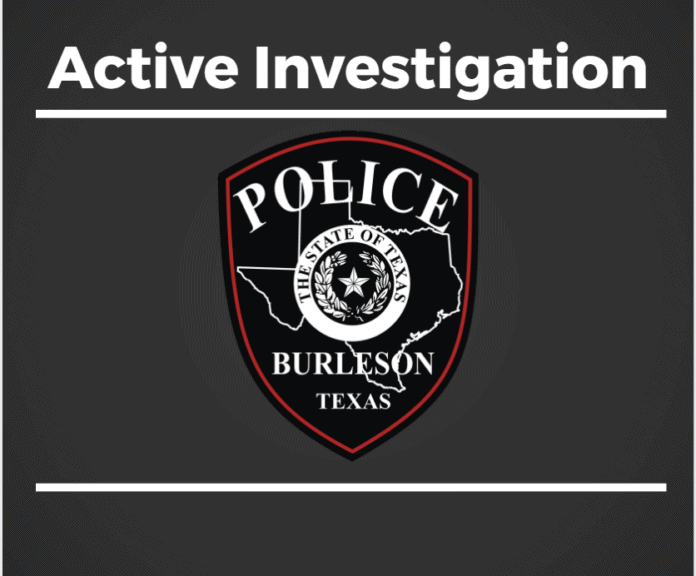 Multiple law enforcement agencies including the U.S. Marshals, Texas Rangers, Texas Department of Public Safety are looking for Jerry Don Elders, involved in the shooting of a Burleson police officer in the early morning of April 14, 2021.

Elders is a white 39-year-old male. His last known vehicle is a stolen silver Toyota Tacoma, DKB6819. Elders is considered armed and dangerous.

Elders is wanted on the charge of aggravated assault with a deadly weapon against a police officer – a first degree felony and possession of control substance penalty group 1, less than 1 gram, which is also a felony offense.

9:25 am JOSHUA ISD UPDATE: Based on the advice from local law enforcement, all JISD campuses and operational buildings are going into Secure Mode effective immediately. This means that school will carry on as normal within the physical walls of the building, but no one will be allowed in or out of buildings until we are given clearance by law enforcement. We will continue to update you once we receive them.

At 4:15 a.m. Wednesday, April 14, a Burleson Police officer made a traffic stop in the 1100-block of Hillside Drive. The officer approached the vehicle on the passenger side. One of the three occupants in the vehicle fired shots and struck the Burleson police officer.

The suspects fled the scene in the car from the Hillside location. It is believed the suspects abandoned the vehicle in the 700-block of John Jones Drive.

The officer we struck multiple times and transported to John Peter Smith hospital in Fort Worth. According to Burleson Police Chief Billy Cordell his condition is unknown. However, it was reported he was conscious and speaking during his transport.

At the time of this morning’s press conference the police did not release the reason for the traffic stop and were still determining if the officer returned fire. Burleson police are using body camera footage to try to identify the suspects as quickly as possible.

Suspects have fled the John Jones location and are still at large. The vehicle, a red SUV, appears to have been burned. Burleson Police Department reports there were two white males and one white female in the vehicle. If you have any information about the crime or see any suspicious activity please contact 911.

Multiple law enforcement agencies are assisting including the Texas Rangers. The area is being canvassed as they look for video footage on security cameras.