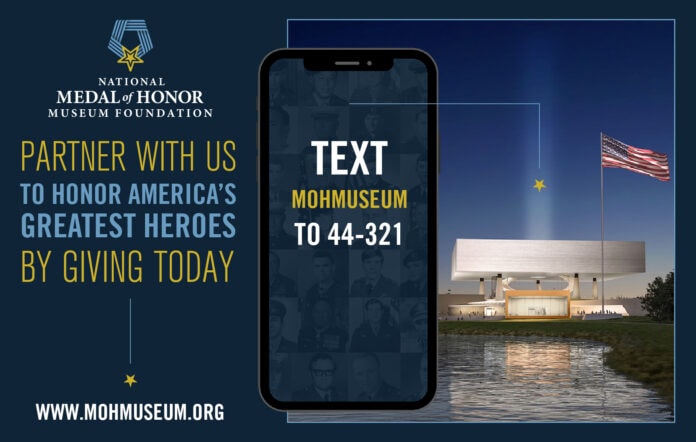 The NMOHMF’s fundraising efforts are led by Charlotte Jones – Chairman of the Board at the NMOHMF and Executive Vice President and Chief Brand Officer of the Dallas Cowboys – and Chris Cassidy – NMOHMF President & CEO, retired Navy SEAL and former chief NASA astronaut. This past fall, three former United States Presidents, Bill Clinton, George W. Bush, and Barack Obama, came together to produce a PSA asking Americans to support the Museum’s mission.

To date, NMOHMF has received donations from 27,272 donors from all 50 states, Washington, D.C., Puerto Rico, U.S. Virgin Islands, Guam, and a handful of other countries.

“The outpouring of support from patriotic donors across the country proves that this project is truly inspiring America. The entire Museum is incredibly grateful that people of all stripes, in every corner of our country, have come together to help us build a home for America’s Medal of Honor recipients, our bravest heroes. Together, we will share their stories for generations to come and in doing so preserve the American values of courage, sacrifice, patriotism, citizenship, integrity, and commitment.”

About the Museum and Monument: The National Medal of Honor Museum, Monument and Leadership Institute will inspire Americans by honoring and preserving the history of the highest military decoration awarded for valor in combat. Serving as a national landmark – and located in America’s heartland in Arlington, Texas – the Museum will provide an unrivaled visitor experience and illustrate the historical thread of sacrifice, patriotism and courage that runs through all U.S. military service members, past and present. Beyond its state-of-the-art, interactive experiences, a critical part of the Museum’s mission will be to use the stories of Medal of Honor recipients to inspire their fellow Americans and motivate them to be their best selves.

A National Monument in Washington, D.C., will commemorate the service and sacrifice of the bravest and most decorated members of the U.S. Armed Forces. To be located in the nation’s capital, it will give all Americans the opportunity to reflect on the courage and patriotism that safeguard freedom and democracy.