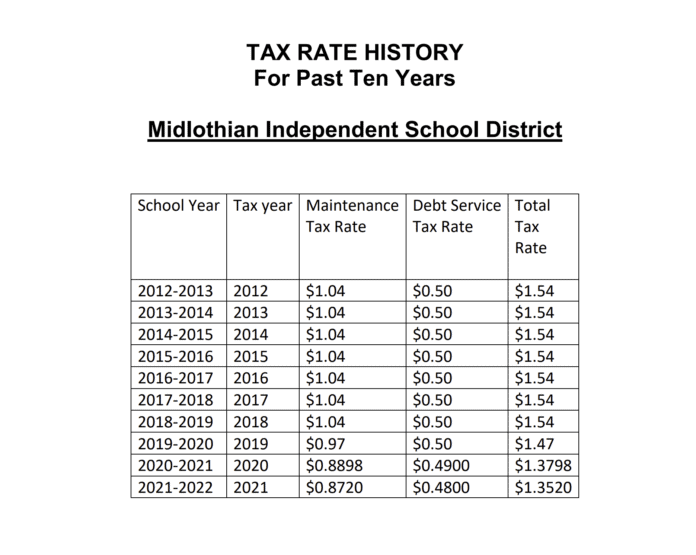 Midlothian – After public comment where one person spoke earlier this week, the Midlothian Independent School District Board of Trustees entered into a closed session to discuss the fiscal year 2022/2023 tax rate options.

The tax rate will be voted on by the school board at the September 19 meeting.

The closed session, which took about 30 minutes before the board returned into open session, was a look at the business and finance for the school district for the upcoming fiscal year and board Vice-President Gary Vineyard said, “Monday’s special session regarding the tax rate for 2022-2023 was for information only, no decisions were made.”

The M&O (maintenance and operations) tax rate, which handles the daily operations, is currently .8546 preset by guidelines based on a fast growth district. The I&S (interest and sinking) rate is the bond debt repayment. Vineyard said discussion involved the fact that “Per board policy, we prepay our bond debt to save future interest and by lowering these balances, allow room for future bond needs without the risk of increasing taxes to taxpayers, should a bond be needed in the future.”

Finding Balance In A Difficult Economy

Over the past five years the district has dropped the total tax rate from 1.54 to 1.3520 saving money for local taxpayers each year.

BOK Financial, the firm that manages the Midlothian ISD school bonds, presented the board with information on the current rate and options for lowering the tax rate again for the sixth straight year to help local homeowners once more.

In fact, according to Vineyard, Midlothian ISD is the only district in Ellis County that also offers an additional 10 percent homestead exemption to further help local homeowners on their property taxes. With that equation, to date it was pointed out Midlothian ISD has saved district taxpayers $111,802,274 through bond prepayments and has still been able to lower the I & S rate.

“This has given us favorable ratings, which are vital when refinancing bonds, Vineyard explained. “Skyrocketing inflation has increased the cost of everything. This affects everyone including MISD.”

Midlothian ISD Board President Tami Tobey added that as trustees, they continue to walk a fine line to balance the need to recruit and retain the best educators through competitive salaries and benefits while still lowering the burden to taxpayers.

“In addition, we will be good stewards in paying down the bond debt in a way that is sustainable,” Tobey said.

Tobey concluded that she and her colleagues on the ISD school board also “beg the elected officials in Austin to help us by simplifying the funding of public education. Criticizing those of us volunteering to decode and discombobulate the formulas necessary to determine expected revenue is not productive. Please fix the funding even though simplification might not yield the same $27,000,000,000 surplus the state now enjoys.”