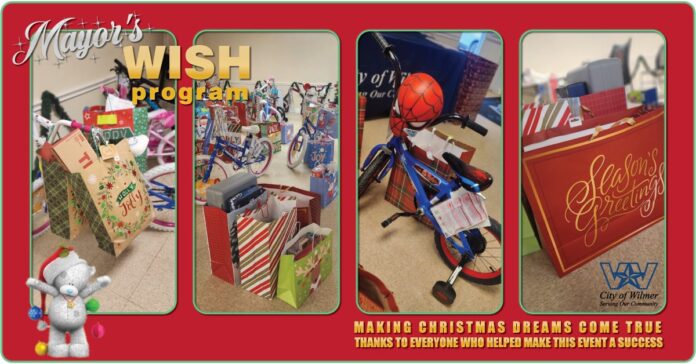 Also known as the Mayor’s W.I.S.H. All parents/legal guardians had to submit an application, with provide Proof of Residency, with their child’s top three wishes, under $25.00. The City distributed the gifts into two sessions during the morning and afternoon on Monday, December 19 at the Community Center.

“The Wilmer Initiative to Spread Hope (W.I.S.H.) Christmas Program was a huge success and we were able to bring cheerfulness and hope to approximately 250 children within the City of Wilmer,” said Wilmer Mayor Sheila Petta.

The Wilmer Initiative to Spread Hope (W.I.S.H.) Christmas was a huge success with approximately 250 children within the City of Wilmer who received gifts from the program including bikes, books, clothes, electronics, dolls, blankets, and much more.

Wilmer’s Initiative to Spread Hope Program began in December 2016 when Mayor Petta was serving as Mayor Pro Tem with the assistance of Councilmember Candy Madrigal. Since 2016, the program has grown from serving approximately 20 children to 250 children.

“Serving our community is our top priority and would like to express my gratitude to all that contributed this holiday season,” Mayor Petta concluded.

For more information, please visit our website at www.cityofwilmer.net.