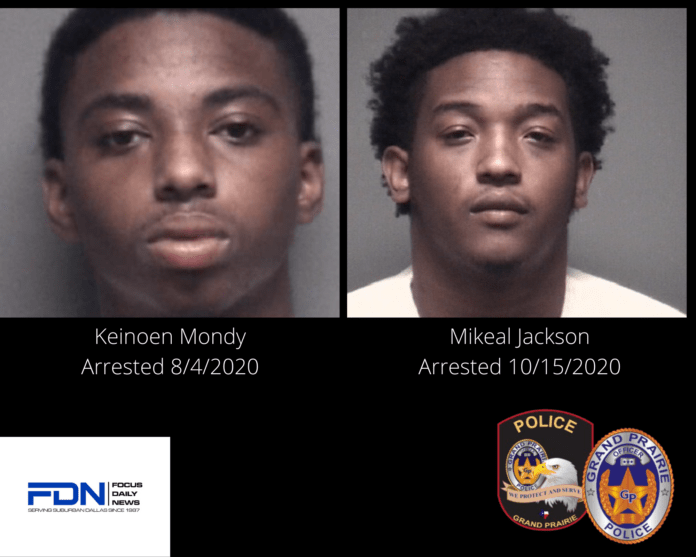 The United States Marshal Service North Texas Fugitive Task Force and Grand Prairie Detectives arrested two men involved in the murder of William Oliver. Keinoen Mondy, 19, of Dallas was arrested on 8/4/2020. Mikeal Jackson, 20, of Dallas, was taken into custody on 10/15/2020. Both men are charged with Capital Murder. The cases will be handled by the Tarrant County District Attorney’s Office.

Grand Prairie – On Thursday, July 23, 2020 at around 9:20 p.m., the Grand Prairie Police Department responded to a report of a shooting in the 5800 block of Candlelight Lane. When officers arrived, they learned that the victim William Oliver, 20, of Grand Prairie, was shot at this location and taken to an area hospital where he later died.

Detectives do not believe that the victim was randomly targeted. No arrests have been made at this time as detectives continue to work this active case.

Investigators are asking for the public’s help in identifying any suspect(s) involved. Crime Stoppers is offering a reward of up to $2,500 for information that leads to an arrest. Tips can be submitted anonymously by calling 972- 988-8477 or online at www.GPCrimeStoppers.org.