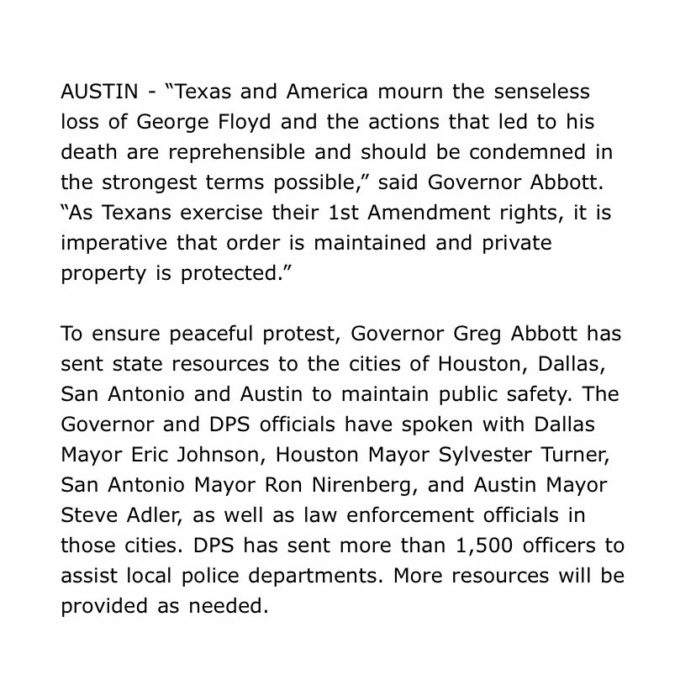 AUSTIN – Protests are continuing across our country today, as large crowds gather to express anger and frustration over the death of George Floyd. In Austin, TX protesters blocked the main lanes of I-35 in downtown. Governor Abbott announced he’s providing additional resources across the major cities to help maintain peace.

BREAKING: Protestors have now blocked the main lanes of I-35 in downtown Austin. pic.twitter.com/LZmYFxSJi3

“Texas and America mourn the senseless loss of George Floyd and the actions that led to his death are reprehensible and should be condemned in the strongest terms possible,” said Governor Abbott. “As Texans exercise their 1st Amendment rights, it is imperative that order is maintained and private property is protected.”

At a press conference today Dallas Mayor Eric Johnson said, “Last night we saw a very large peaceful demonstration that reflected the Dallas I know…we unfortunately saw some reckless behavior who’s agenda had nothing to do with human rights or civil rights.”

Tonight, Dallas expects more protests and the Mayor cautions,  “To those looking to take advantage of our community, you need to stay home. We will not tolerate selfish lawlessness in the city of Dallas. Dallas is better than that. Dallas deserves better than that.”