GLENN HEIGHTS — The hearing continues Tuesday night in the Glenn Heights City Council chambers to determine if current Glenn Heights Mayor Leon Tate will be asked to step down before the end of his current term.

Originally scheduled to begin on September 18, the hearing was postponed until October 2. On October 2, at nearly midnight when the council meeting/hearing was still going strong, officials decided to table the hearing until the following scheduled meeting.

Agenda items were moved and replaced several times with votes during the September meeting. Eventually the time allotted for the hearing had expired. However, even from the beginning there was mention of the hearing being postponed with an obvious split among the council members.

Mayor Pro Tem Tony Bradley said he felt like the hearing proceedings were going too fast. He also said he did not think it was ‘fair to make it up as we go while we are executing it.’

To a point, Place 1 Council member Travis Bruton seemed to agree, while the remaining four council members seemed obliged to move ahead with the hearing on Mayor Tate’s alleged violations of the Home Rule Charter and city ordinances.

While October’s first council meeting did serve as a catalyst to get the hearing underway, there were also several twists and turns before proceedings got to a steady pace.

In brief, there was much conversation and several objections that needed to be voted on separately. Bradley and Bruton voiced a number of concerns about objections, timelines, voting on changes and other confusing items that had to do with the hearing procedure guidelines.

Bradley tried unsuccessfully to have the hearing tabled again to allow both parties to get ready, but that item failed 5 – 2.

There were a few in the audience who came to speak on the mayor’s behalf. One resident said she was upset at what was happening, and that it was a waste of taxpayers money. While another resident encouraged the council to proceed with the hearing since the mayor had been elected several times.

Tate himself went on to say he believed the hearing was an unlawful act and said he wanted more time to seek representation on his behalf. Tate also threatened litigation in the future and said the hearing itself was a violation of the city charter.

Finally, the hearing began at 8:22 p.m. Tate said he did not understand why he did not get to vote on the outcome while two of the accusers who brought the charges could vote.

Bradley also said it did not seem fair, but the City attorney referred to the City Charter for an explanation.

As the hearing began Tate called it an “illegal meeting” and he would not be in attendance. After a short time, he returned to council chambers along with several attorneys on his behalf.

The mayor’s attorney immediately presented himself and asked for more time for review. Council members agreed Tate had ample time to retain an attorney since the discussion about the hearing began in June. It was noted there will be four witnesses, one of which is Glenn Heights City Manager David Hall.

However, as the meeting ended, the question still loomed as to how evidence was gathered regarding the mayor’s violations. Members of the city council launched an investigation in June, 2018, examining possible ordinance and city charter infractions.

The findings of that investigation were discussed at the August 21 meeting. Council looked into the matter, but the only action taken was scheduling a preliminary meeting. September 18 was the first date set to decide on Tate’s fate as the Mayor of Glenn Heights.

The item was placed on the agenda by Ron Adams and Machanta Newson.

Councilmember Harry Garrett had also spoken in the past regarding the investigation about the Mayor’s behavior. He says that it is a barrier to the council’s ability to conduct business with peace and decorum. Garrett also noted the behavior of the Mayor following the appointment of David Hall as City Manager. The place 5 representative alleges Tate’s relationship with the city manager was negative and at times was berating to Hall. Garrett went on to say that the Mayor’s behavior put undue stress on municipal employees.

Tonight’s continuation should bring the hearing to a close. Hall, and at least one former city employee, will take the stand. They are expected to describe past working conditions within the city as well as interactions with the mayor. 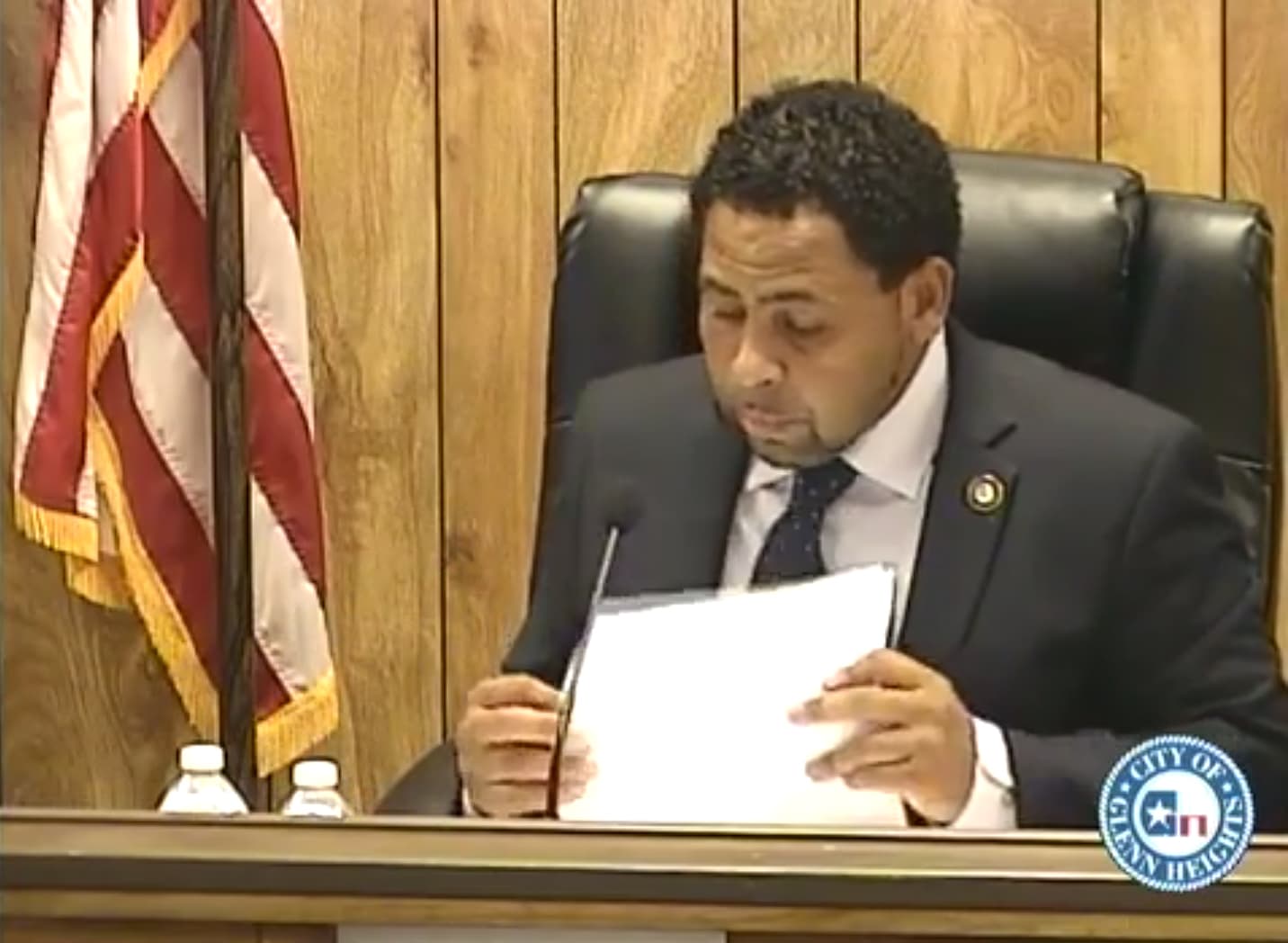