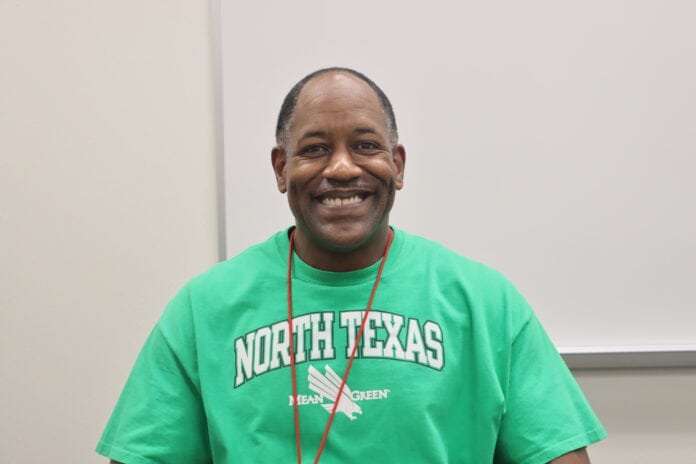 (CEDAR HILL, TEXAS) Lake Ridge Elementary Communities in Schools (CIS) Coordinator Christopher Coit doesn’t think of himself as a hero – even on the day when he saved a second grader’s life in the cafeteria.

“It just feels like I’m doing my job,” Coit said.

In the midst of 90 scholars in the cafeteria, several scholars approached Coit to say that one of their classmates was choking on some Cheetos. Coit acted quickly and performed the Heimlich Maneuver to save the scholar’s life.

Perhaps Coit – a 42-year-old Cedar Hill citizen and parent of two Bessie Coleman Middle School scholars, doesn’t think of himself as a hero because he’s been one for so long.

“Mr. Coit is very visible on our campus, and everybody knows him. He is attentive and helpful,” Lake Ridge Principal Marquita McCullum said. “In this case, he saved a scholar’s life.”

By day, Coit works full-time as CIS – which bridges the gap between teachers, scholars and parents and provides resources to at-risk scholars and families.

Working in education is important to Coit, who plans to become a campus principal after he retires as a Sheriff’s Deputy.

“The youth are our foundation,” Coit said. “If you get the foundation right, you shouldn’t have any issues or problems.”

Coit grew up in Dallas and graduated from Kimball High School, where he was a standout football player. He earned a football scholarship to the University of North Texas, where the head coach was Darrell Dickey (who is now the Offensive Coordinator at Texas A&M).

“He would mentor us and tell us that only 2 percent of college football players make the NFL,” Coit said.

Coit took those words to heart. After a brief NFL tryout, Coit utilized his Criminal Justice degree from UNT rather than pursue a professional football career in Canada or overseas.

He worked as a police officer at the United States Federal Reserve Bank in Dallas and then the Dallas County Sheriff’s Department.

He worked for eight years in real estate for Bank of America and then returned to the Sheriff’s Department.

Coit was one of the co-founders of All Pro Dads, a CHISD volunteer organization, at Waterford Oaks Elementary when his sons were enrolled there.

During his time as a volunteer at Waterford Oaks about a decade ago, Coit was able to save a scholar’s life by calling paramedics. That scholar is now at Cedar Hill High School.