Rescuing Mustangs Can Be A Wild Ride

Mention the word mustang and the vision of wild horses running free comes to mind.

Sadly, that is not the case for many in today’s world. But thanks to Candace Ray of Cedar Hill, owner of Evanescent Mustang Rescue, these graceful and legendary horses are given a chance to live a life they were born for.

Working with S Bar C Ranch in Cedar Hill, Evanescent recently rescued two dozen mustangs from being sent to auction. It is the most they’ve saved in one rescue effort, Ray said, and that group has now become as the TX24.

“Depends on the month, but two to four is a fair estimate of normal months, to prevent them from going to horse traders/kill pens where they are exposed to more diseases and stress,” she said.

Initially started in 2015 with Comet’s rescue, Evanescent Mustang Rescue & Sanctuary officially became a 501(c)3 charity organization in March of 2017. The sanctuary, which is in Sherman, has 15 acres of pasture and hay field, a quarantine area and a paddock for separating newcomers.

Thanks to multiple foster homes across the U.S., Evanescent has been able to rescue well over 600 mustangs and burros since becoming an official charity.

“We put mustangs through quarantine (usually 30 days) and evaluation to determine their health and level of training. Some mustangs are listed as available for adoption on our Facebook page – we often find them approved homes through people contacting us in search of a mustang – however, our goal is to have a page on our website listing all adoptable mustangs and burros in the near future,” Ray said.

“We occasionally rescue domestic horses and donkeys, but normally they are bonded with a mustang. When initially starting the rescue we realized how many equine were at risk and decided to focus on one special breed to help prevent burnout.”

Ray said she started the rescue effort after a personal experience with her own special horse.

“Several years prior to deciding to start the rescue I had a mustang gelding who has made a huge impact on my life experiences and introduced me to the world of horse slaughter. Narrowing the rescue down to BLM mustangs and burros initially looked like a few rescues each year, however it took on a life of it’s own,” she said.

Despite the challenge of the COVID-19 pandemic, Ray said rescues in 2020 averaged over 10 per month, not counting the TX24. Each year since their beginning, she said the rescues have grown in numbers, as have the fosters and supporters who help make the mission possible.

Along with helping rescue the horses, Ray has worked to unite them to help with the emotional healing of humans.

“As an LPC (licensed professional counselor) I always wanted to join horses and humans to enhance the healing process. What better way than to take traumatized mustangs and have them help traumatized humans?” she said. “Many of our mustangs and burros go into therapy programs across the U.S., while others go into homes through adoption, and there are other special circumstance mustangs and burros that go into one of our sanctuary locations.” 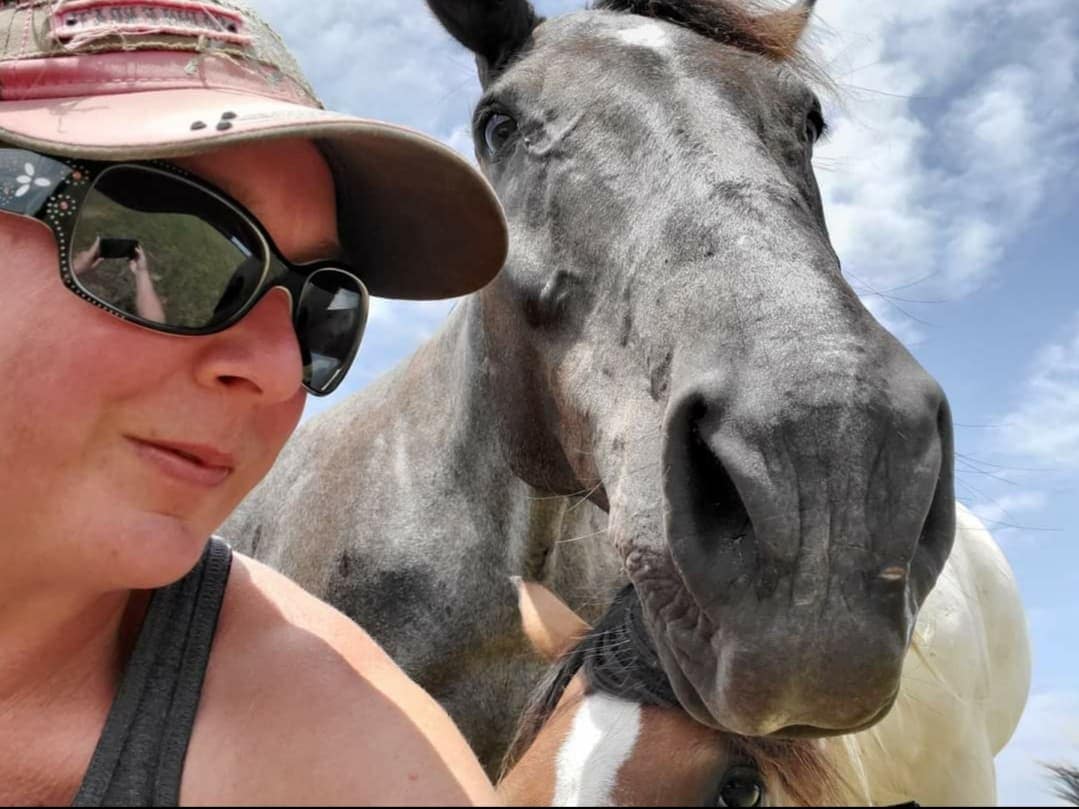 Shawnee Barham and her husband Cody own S Bar C Performance Horses and began working with Ray to train the rescue horses in May of 2020. The very first horse they worked with to rescue was an auction horse they named Fancy, and they ended up adopting her.

“A friend came to me and asked if we could go. I think we dropped everything and left,” Shawnee recalled. “From there we got three more and got two of the three adopted. We sent one to the sanctuary as we felt that is what was best.

“Then we had six more dropped into our lives, some from auction, some hauled from fosters. We have gotten two of the six adopted. We still have Dollor, Smoking Tux (2017 Extreme Mustang Makeover winner), Ash, and Whiskey.

“Well, and now the TX24 will be added to our training list. That group has geldings, babies, mares and pregnant mares of all ages.”

While they rescue mustangs and burros, Ray said they make a concerted effort to not outbid individuals offering homes for mustangs and burros. Sadly, however, there have been a few that they were not able to save at auction, and within days they saw them listed on one of the kill pen pages, which breaks Ray’s heart.

A Challenge, An Experience, & A Chance To Learn

“A good example of a mustang going through auction would be a recent Evanescent rescue mustang, Frosty, who went through a Texas auction and did not bring what the seller was wanting, so he was pulled from the auction by the seller,” Ray said. “After the mustang went through the sale an individual offered to purchase him in the parking lot. The following week he was sent through the sale again, and thankfully the auction owner contacted us and helped make sure we outbid the kill buyers at that sale.”

Their youngest rescue was a one-day-old mustang colt born at a kill pen to a mustang mare. Though the baby only survived a week with the best vet care available, the momma is alive and well. Ray said her family has been directly helping with the TX24.

Many of their mustang rescues are pregnant mares and senior mustangs, she added.
“Its a challenge, its an experience but, every mustang we have helped in some way has changed even our own outlook on mustangs,” Shawnee said. “The stereotype you hear isn’t always what you get.

‘Trust From A Mustang Is Unbelievable’

“My husband was raised around horses and was taught that mustangs were crazy and unpredictable, and to never own one. Working with them as we have has shown him that it’s not true, that a mustang can teach you things about horses that you would never learn from a domestic. Now, his mindset has completely changed. He’s come to realize the trust from a mustang is unbelievable.

“The feeling you get when you finally accomplish even the simplest of tasks with a mustang Is completely indescribable. You know that mustang had to let go of all instincts to allow you to teach them, ride them, heck, even catch them. They are a flight animal, so naturally they choose to run.”

She said that working with mustangs has also helped in the training of other horses.

“We recently got in an unhandled domestic mare. With the knowledge we have gained from mustangs, we will be able to gain her trust faster than traditional methods,” she said.

Once a horse or burrow is adopted out, Ray said she does her very best to maintain contact with the adopters and follow their updates on social media.

“Sometimes we have adopters return mustangs because the initial adopted mustang did not fit what the adopter needed or their life circumstances changed and they were no longer able to keep them,” she said. “Some will choose another mustang or will contact us when they are in a better position to care for one.