DUNCANVILLE—It started well enough for the Sam Houston Texans, but quickly soured for them. Interceptions, penalties, and bad snaps kept Duncanville out of the scoring in the first quarter, but they roared back with passion in the second quarter.

Duncanville’s first drive ended because of an incomplete pass and a penalty. Their second drive started on the Panthers’ own 4-yard line ,after a tremendous punt by Sam Houston’s Josh Delgado. That effort fizzled after a quarterback sack and errant long snap over the head of Jaylin Nelson.

The punter managed to kick the ball for a short distance only to have it bounce to the Duncanville 33-yard line. Sam Houston kicked a 48-yard field goal and led 3-0 with 2:23 minutes left in the first quarter.

Despite Penalties Duncanville Found A Way To Win

When Duncanville got the ball the third time, things got worse. A holding penalty and two incomplete passes landed Duncanville on their own 33 yard line. Another long snap over the punter’s head landed in the end zone, and was recovered by Sam Houston for a touchdown. Sam Houston increased its lead to 10-0.

It was time to turn things around. A timeout was called on the field. Duncanville Head Football Coach Reginald Samples seemed to spin his magic. The rest of the game belonged to Duncanville.

A 14-yard run by Duncanville quarterback Jaylin Nelson got the ball to the two yard line. During the next down, Nelson plunged over for the score. The extra point by Blake Thomas was good, and with 10:16 left in the half the score was 10-7 Sam Houston.

After another scoreless possession by Sam Houston, the Panthers offense retook the field. With 3:40 left in the half, Nelson completed an 8-yard drive for another touchdown. After a Blake Thomas extra point Duncanville led 14-10, with 3:17 left in the half.

Duncanville scored a TD in each of the last two quarters. The first came on Alfredo Porter’s 8-yard run. The final Panther touchdown of the game came on a Tre Siggers 9-yard run. The extra point by Thomas was good.

Sam Houston would score two TDs and a point after in the third quarter, finishing with 23 points.

Duncanville goes 2-0 and Sam Houston 0-2 for the season.

Duncanville amassed 440-yards in total offense. But also had 11 penalties that cost 102-yards, plus field position, loss of down and momentum.

Before the game, Coach Samples stated that Duncanville has to compete the whole season and improve with each game. His goal for the team will be to cut down on costly penalties, stay focused, and play with heart while developing good habits. “Our goal is to get better each game.” 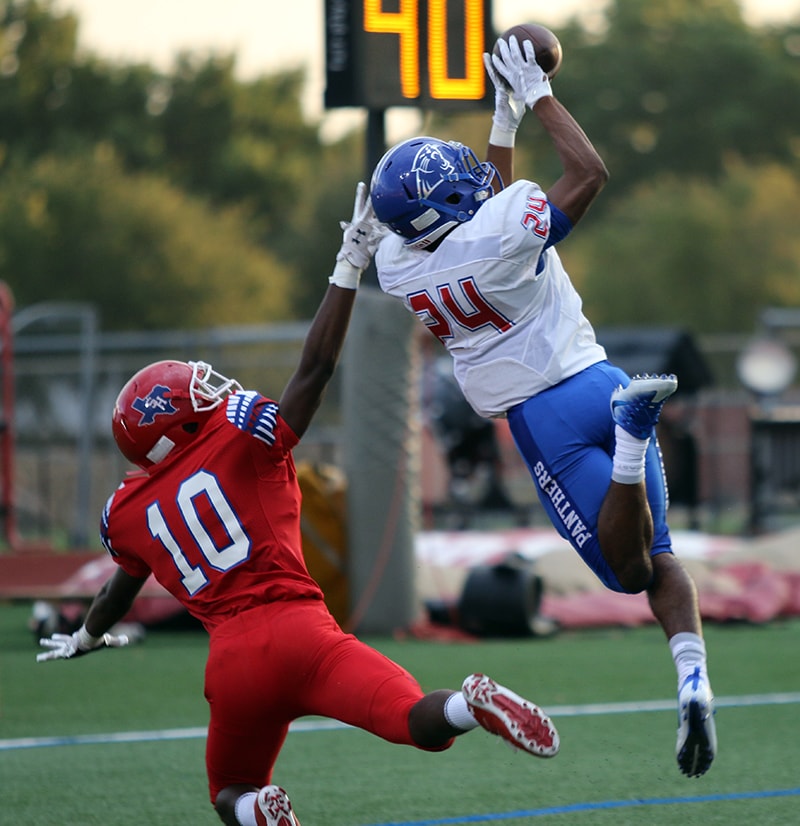