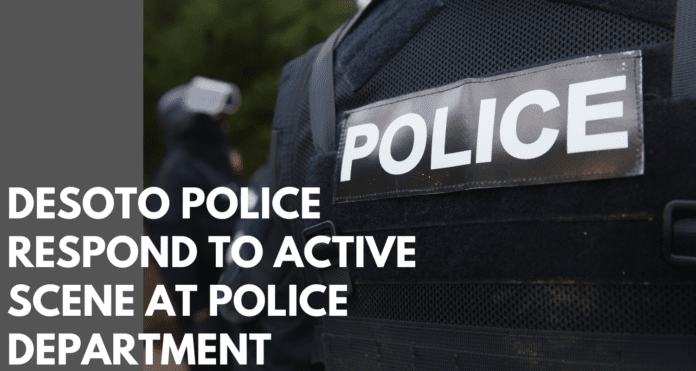 Earlier this afternoon, DeSoto Police requested that members of the traveling public avoid the immediate area of their headquarters at 714 E. Belt Line Road, but the situation has been resolved without incident and there are no current travel restrictions in place.

At approximately 1252 hours, a person inside a vehicle in the parking lot of DeSoto Police Headquarters dialed 9-1-1 and announced that he was there and planned to harm himself and possibly others. Police were alerted to the situation and established a perimeter and dialog by phone with the individual for approximately two hours. During which time the subject frequently moved his pistol to his head.

Our Tactical Team responded and developed a response plan. Officers decided to move in as the conversation broke down, and officers blocked the vehicle with the use of our armored vehicles. Officers were able to get the subject to surrender peacefully, and he was transported to a medical facility for evaluation. The subject is identified as Capelton Tafari Edwards, age 25 from Lancaster.

DeSoto Police would like to thank the members of the public for their patience and are pleased that this incident was resolved without anyone being injured.
The armored vehicles that were seen in use by our Regional SRT were loaned to the police department by the US Government to help in situations just like this.

Southwest regional response group vehicle and Midlothian police cars were at the scene.

Police Chief Costa updated the media around 3:40 p.m., stating an individual, Capelton Tafari Edwards, age 25 from Lancaster, parked in the DeSoto Police department headquarters parking lot was in crisis. The individual was in a vehicle and spoke of harming themself or others, and had a handgun in their lap. Law enforcement officers engaged in conversation with the individual for approximately two hours and were able to get them to surrender without incident or injuries to anyone.

Costa says no charges will be filed, they just want to get the individual the help they need.