BOULDER—University of Colorado junior wide receiver Laviska Shenault Jr. has announced that he will forego his final season of eligibility and declare for the 2020 National Football League Draft.

Shenault announced his decision on his Twitter page at 1 p.m.

A top NFL prospect after a breakout sophomore season in 2018, Shenault cemented those rankings as a junior, putting his superior speed and strength to the test despite being hampered with injuries and becoming the focal point for all defenses the Buffs faced in 2019.

“Laviska Shenault represented our relentless culture and was one of the most dynamic, dominant and versatile players that I have ever coached,” CU coach Mel Tucker said. “He embodies the true ‘show me, don’t tell me’ competitive spirit. I look forward to watching him develop and compete at the elite level and thank him for his contributions on and off the field. Once a Buff, always a Buff.”

One of the most dynamic players in the nation over the past two seasons, he lined up, caught passes and ran the ball from a multitude of positions including outside receiver, slot receiver, h-back, tailback, and tight end, as well as running the ball out of the wildcat position.

“First and foremost, I want to thank all of my friends, family and all those who helped me get where I am today,” Shenault said. ”I took in a lot of wisdom and knowledge from all of you and used it to make me a better man on and off the field. I’m blessed to be in the position I am today and I know my dad would be proud of the foundation I left as I pursue my dream of playing at the next level and declaring for the 2020 NFL Draft.”

Shenault finished the 2019 season with 56 receptions for 764 yards and four touchdowns receiving and 21 rushes for 161 yards and two touchdowns rushing. A total of 460 of his 764 receiving yards came after the catch and an astounding 232 after contact. He broke 21 tackles, made 17 players miss and was tackled by one defender just 15 times. On his 23 rushes, 128 of his 161 yards came after contact, he broke 16 tackles and made 10 defenders miss and was tacked by one defender twice.

Of his 77 touches and 925 yards from scrimmage, 393 of his yards came after contact and he was tackled by one defender just 17 times. He was tackled by two defenders 25 times and gang tackled 23 times while also picking up 45 first downs, including 22 on third or fourth down.

Of his 104 touches as a junior, he was brought down by one player just 24 times while it took two players to bring him down 25 times and he was gang tackled 28 times. A total of 634 of his 1,011 receiving yards came after the catch and 346 came after contact.

A Stellar Career At CU

He finished his career eighth in CU history with 149 receptions, 11th in receiving yards with 1,943, 25th in yards from scrimmage with 2,223 and 35th with 2,332 all-purpose yards. He was also a virtual first down machine, earning one – or scoring a touchdown in goal-to-go situations where the NCAA doesn’t award a first down as is the case in the NFL – on 107 of 191 offensive touches, or 56.0 percent of the time.

Shenault will begin combine training in January. Some future dates of importance are the NFL Combine, which will be held Feb. 23-March 2 in Indianapolis, CU’s pro day in mid-March and the NFL Draft, which will take place April 23-25 in Las Vegas.

Shenault is the 10th Colorado player to declare early for the NFL Draft; the nine previous Buffs were all juniors as well and were all selected, including two in the first round (defensive tackle Leonard Renfro by Philadelphia in the ‘93 draft and running back Rashaan Salaam by Chicago in ‘95). Two others were second-round selections, the last two to declare: receiver Paul Richardson (by Seattle in 2014) and Isaiah Oliver (by Atlanta in ‘18).

DeSoto would like to wish Shenault well in the 2020 NFL Draft. 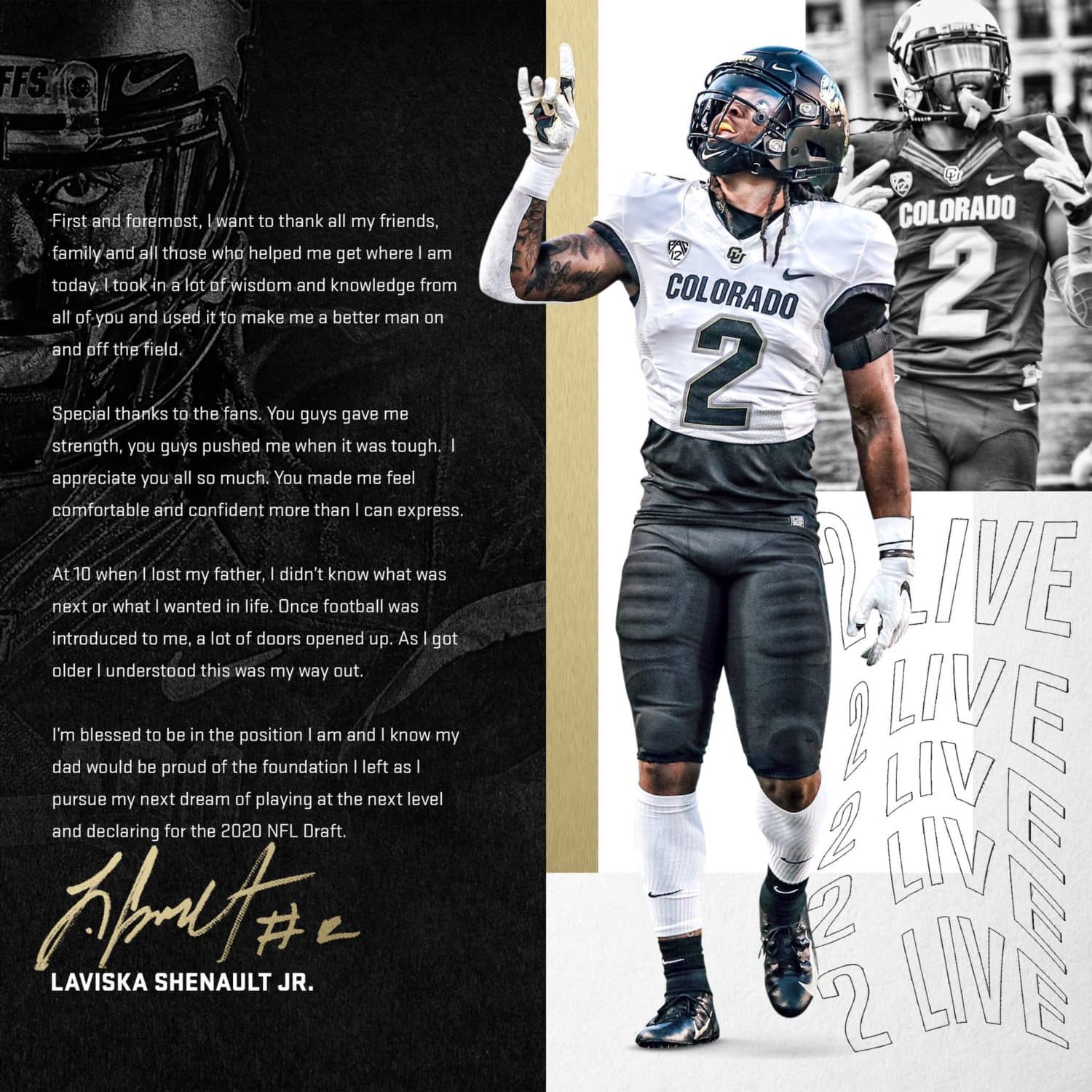