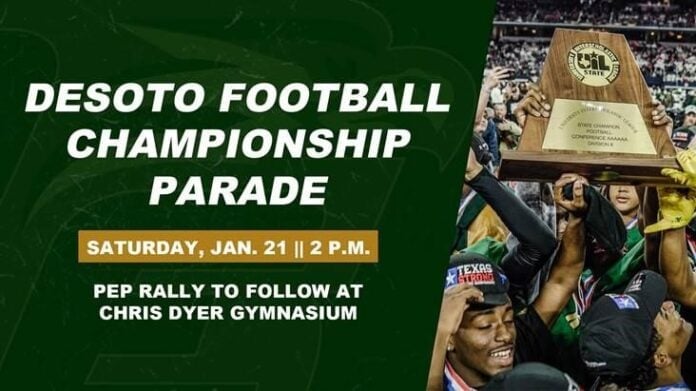 This UIL State championship victory was a capstone to an already victorious (14-2) season for the Eagles. This is the first championship for District Athletic Director and current Eagles Football Head Coach Claude Mathis and the second in the school program’s history.

In celebration of this outstanding achievement, DeSoto ISD and the Cities of DeSoto and Glenn Heights will host a joint celebration parade on tomorrow, Saturday, Jan. 21, followed by a community pep rally in the Chris Dyer Gymnasium.

From 224 Amber Ln. west to Hampton Road north to Eagle Drive west to 600 Eagle Drive at the Chris Dyer Gymnasium.

The parade will culminate in a community pep rally highlighting the 2022 DeSoto Eagle Football State Championship Team held inside the Chris Dyer Gymnasium.

Parade and pep rally participants and attendees are asked to wear GREEN to show Eagle Spirit!