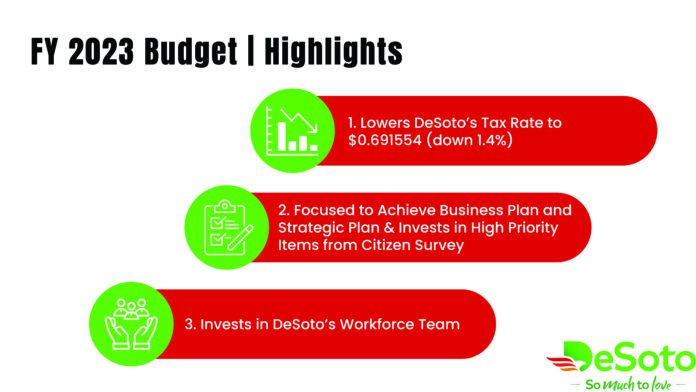 The DeSoto City Council considered a number of zoning changes during this past weeks council meeting but the agenda item affecting the most people was the budget and tax rates.

Peter James explained the budget and noted that all necessary postings both online and in the city’s official newspaper, Focus Daily News, were done in a timely manner. The proposed tax rate was first presented to City Council at the meeting held on August 16. The tax rate necessary to pay debt obligations and provide the level of operating services as proposed in the budget is 69.1554 cents per $100 valuation, one cent lower than Tax Year 2021.

The proposed rate is composed of two parts, the debt service rate (I&S) and the maintenance and operations rate (M&O). The debt service rate is 14.7305 cents per $100 valuation, which is an increase from the Tax Year 2021 rate of 12.5019 cents, which was intentionally set low by historical standards for one year to utilize excess fund balance.

The maintenance and operations rate is 54.4249 cents per $100 evaluation, a decrease from the Tax Year 2021 amount of 57.6540 cents. Adopting this tax rate will enable the City to cover the cost of additional personnel costs resulting from the recent compensation study, increase staffing and funding for public safety, and other operating costs.
City Manager Wright noted that the Budget going down marks a decrease for 12 consecutive years. The budget did call for a 2.1% increase in the water and sewer bills, which council denied.

In the public hearing one citizen question concerning LED street lighting was addressed by City Manager Brandon Wright, saying the city would be converting to an LED lighting system and this was beginning that process. The city manager addressed a number of other questions as well concerning various budget items.

Item A – The proposed Budget and Capital Improvement Plan (CIP) were first presented to City Council back on July 7, 2022, with copies made available online and at various City facilities. Discussions on the proposed items were held during budget workshops on July 21 & July 22. The City Council Business Plan was reviewed and discussed at the City Council Summer Retreat held on August 5 & 6, 2022.

The proposed General Fund and Debt Service Fund budgets were also discussed at that time. The tax rate necessary to pay debt obligations and provide the level of operating services as proposed in the budget is 69.1554 cents per $100 valuation, a one-cent decrease from Tax Year 2021.

The proposed rate is composed of two parts, the debt service rate (I&S) and the maintenance and operations rate (M&O). The debt service rate is 14.7305 cents per $100 valuation, which is an increase from the Tax Year 2021 rate of 12.5019 cents, which was intentionally lowered by historical standards for one year to utilize excess fund balance. The maintenance and operations rate is 54.4249 cents per $100 evaluation, a decrease from the Tax Year 2021 amount of 57.6540 cents. Adopting this tax rate enables the City to cover the additional personnel costs resulting from the recent compensation study, increased staffing and funding for public safety, and other operating costs.

Councilperson Hughes moved to approve this item and Councilperson Brown-Patrick seconded the motion, which then passed.

Item B, the Water and Sewer Services, budget was a much stickier issue. City staff had recommended rate increases in the water rates of 2%, Sewer rate increases of 2%, and Sanitation rates to increase by $2.19 a month, all to be effective October 1st of this year.

Councilmembers Chism, Raphiel and Brown-Patrick all voted against these increases, making the vote a 3-3 tie since the Mayor Pro-Tem was not in attendance as a tie-breaker.

A tie means the increase was denied. City Manager Wright said staff would need to look into making changes on the revenue side and no further action was taken at the meeting on the water and sewer rates.

Item E, the property tax stipulated in the budget was then approved unanimously after Councilmember Hughes moved to approve and Councilmember Chism seconded. Although the rates are decreasing, the funds raised overall will increase by $5,490,178 with $740,738 of that from new property added to the tax roles and the remainder due to increased property values.

Earlier in the meeting Item H1 called for an Economic Development agreement for a truck vehicle screening wall along Wintergreen Road.

The request was to substitute an iron fence with a brick screening wall as an additional visual barrier for the screening. Roadway impact fees were requested to be reduced to $219.751.86. The original fee was to have been 206,473.34 more than this. This was approved unanimously.

Three zoning changes were all requested by the same applicant. A public hearing on Zoning Case Z-1479-22 to rezone The Mark (616 and 620 Belt Line Road) to change zoning to General Retail.

City staff did recommend approval but if the first one was not approved, the second and third would become irrelevant.

The next change if the first was approved would be to operate a restaurant drive-through (Starbucks) at 620 W Belt Line Road and the next would be to establish “Minor Medical Emergency Clinic.”

Move on the first motion was made by Councilmembers Chism to approve and Councilmember Hughes seconding. Motion passed 5-1 with only Councilperson Marks voting against.

The ordinance on the Starbucks case then came before Council. Councilperson Hughes made a motion to approve with councilmember Brown-Patrick seconding.

There was a considerable debate on whether some establishment other than a Starbucks could occupy the space if Starbucks ultimately did not.

It was decided to amend the motion to make the business which would come be targeted toward Starbucks as much as possible. The City Attorney provided the appropriate wording and the motion was made again with the motion amended. Motion passed again with only council person Marks voting against.

The next item on the agenda was the establishment of a “Minor Medical Emergency Clinic.” Mr. Charles Brewer related that this would require a super majority of the council to approve since P&Z had recommended denial.

P&Z was concerned about traffic and noted there were already many medical facilities in that general area.

In discussion it was pointed out that this would be the first Texas Health outlet south of the Trinity. And, Texas Health is not a typical small medical facility.

Personal relations with physicians are typical at Texas Health, whereas with other emergency health places there is no possibility such personal relationships. This facility would measure out at 3,200 square feet.

Mayor Proctor moved that the public hearing be continued to a future meeting until the full council would be present since a super majority would be needed.

The applicant agreed that waiting might be best for everyone involved. On that basis the item was tabled until the October 18th meeting.

The next public hearing was for Zoning Case Z-1482-22 to amend single family 12 to single family 8. Staff recommended that the City Council approve the Ordinance to rezone all of Tract 12 in the R.T. Bandy Survey, Abstract 115 (900 E. Parkerville Road) and part of Tract 24 in the M.J.S. Wampler Survey, Abstract 1537 (1100 Sherry Lane) from existing Single Family Residential 12 (SF-12) to Single Family Residential 8 (SF-8). Staff noted that this zoning change request complies with the City 2015 Comprehensive Land Use Plan.

The motion to approve was made and seconded. The vote was 4-2 with Councilpeople Marks and Raphiel voting against. 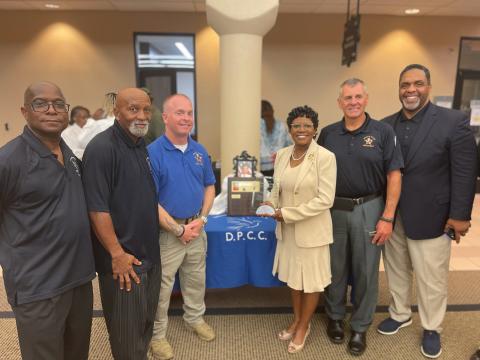 Lancaster Parks and Recreation Ready for the Holidays