GLENN HEIGHTS – The Glenn Heights City Council meeting was a packed house Tuesday night. In order to accommodate everyone there were residents spilling out into the Fire Department bay. Residents were on hand to speak out against a resolution that was later passed 4 – 1. Place 5 Shaunte Allen voted against and Place 3 Travis Bruton and Place 6 Machanta Newsom were not in attendance.

Shaunte Allen provided the following statement to Focus Daily News after the meeting: “I am deeply disappointed in the Glenn Heights City Council for allowing the complaints of employees – who serve us – to go unheard! Allegations of sexual impropriety, verbal abuse, and a toxic workplace created by the city manager should be thoroughly investigated by a third-party organization. It is incumbent upon the city council to exercise our due diligence in this matter. I vehemently oppose Resolution R-40-21 as it is unethical and unfair. Evidence from both parties should have been presented beforehand.”

A number of residents spoke against Glenn Heights City Manager David Hall in regard to his oversight of the police department. Many expressed concern regarding the turnover in that department, alleging employees that speak out are being retaliated against. One email, from former Human Resources Manager and wife of Luc Benson, former Interim Police Chief, Kacye Benson stated there was an improper use of language by Hall in regard to her husband among a number of other allegations (that FDN has not been able to confirm prior to press time).

Mrs. Benson spoke in support of her husband stating her husband was “belittled, degraded and threatened,” while serving as Interim Police Chief in Glenn Heights. She played a recording of a conversation between her husband and City Manager Hall.

She implored community involvement. When questioned after the meeting, Hall said the recording Benson played during public comments was taken out of context.

Glenn Heights City Attorney Victoria Thomas told Benson to stop playing the recording during her public comment due to swear words. She expressed concern the language was inappropriate for a younger audience that might be listening to the meeting as it was being live streamed.

Addressing A Letter From Glenn Heights Fraternal Order of Police

Another point in question was the existence of the Glenn Heights Fraternal Order of Police which was mentioned. No one was able to confirm this organization existence of viewpoints by press time.

The resolution which passed was in support of the City Manager’s oversight of the Police Department. A letter had been received by the City Council from Jeremy Adye, “purportedly in his capacity as president of an organization referred to in that letter as the Glenn Heights Fraternal Order of Police (the “GHFOP”).” Adye had also posted the letter on the Glenn Heights Police Officer Association social media account. The letter “contained conclusory allegations of misconduct by the City Manager in the oversight of the City of Glenn Heights Police Department.”

The resolution that council passed stated the City had “attempted to independently confirm the existence of the GHFOP and Mr. Adye’s office with such organization and was unable to find any evidence of its existence. It also said it requested that Mr. Adye provide some confirmation of the organization’s existence and his office with the organization. Those requests were declined and/or unanswered as of press time.”

Residents who spoke about the Police Department controversy also said Hall had terminated or made employees resign in lieu of termination. At least one of the speakers was too emotional to read his statement himself.

For the first time in four years as City Manager, Hall spoke on his own behalf before the vote on the resolution. He stated, “I am tired. I’m sick and tired. Because I have been your City Manger almost four and a half years, I’ve been a faithful, loyal employee for six and a half years and I’m the only employee here that’s not taken a vacation that whole time. And what I’m tired of is that I’ve had people stand here and lie, and twist…”

At that point Hall’s statement was interrupted by heckling from a member of the audience, at which point Mayor Garrett said Manager Hall deserved the same respect he gave them when they spoke. He warned the audience that if anyone could not be respectful, he’d have them escorted out by the Police Department. 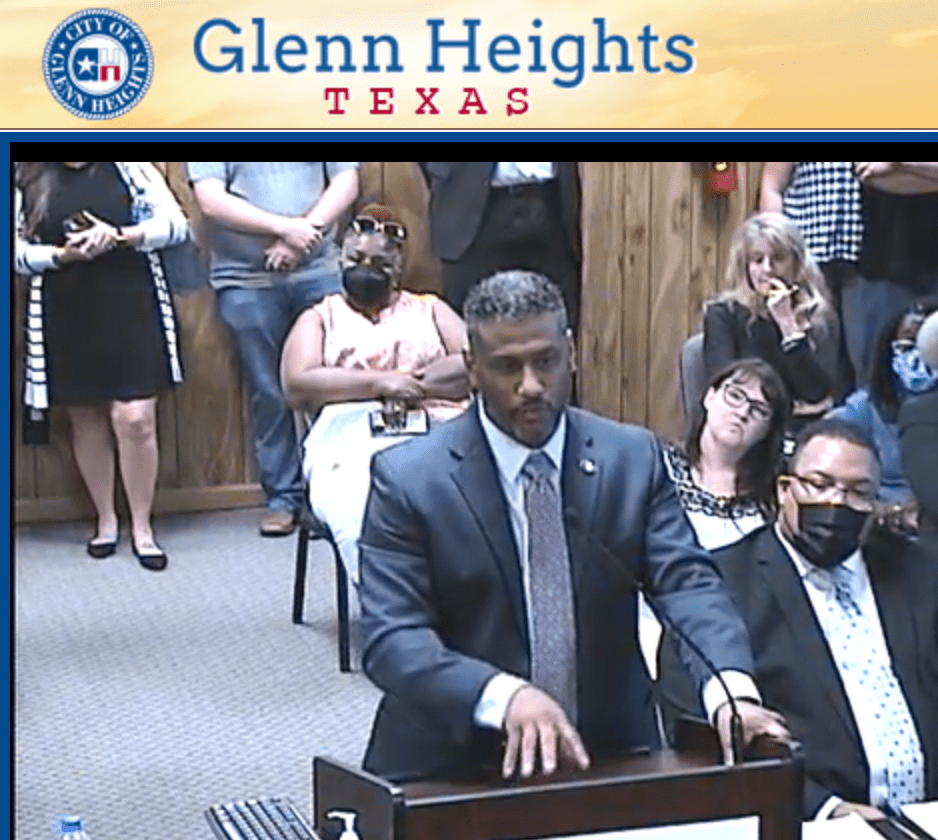 In addressing some of the complaints Hall confirmed he is “absolutely given to colorful metaphors.”

He also mentioned that Benson, who spoke against him, had just several months ago sent him a text message to have lunch. In addition, he said that the part of the recording that was not played involved Luc Benson and him talking. It included him apologizing for using language that the former interim police chief said offended him.

Hall said that while these people could get up and tell the audience their truths, he is limited to what he can say. He added, “facts are very different. I welcome anything you want to see about any personnel decision I have made.”

During Hall’s comments, resident Scott Anderson who spoke against the City Manager, held up his phone while another resident pointed to his watch indicating Hall was out of time. He was asked by Glenn Heights Mayor Harry Garrett to show the same respect to Hall as everyone showed to those who spoke during public comment.

Anderson responded, “The constitution allows me to be disrespectful.” As he was being escorted out, he made a lewd hand gesture toward Hall and the City Council.

While the Glenn Heights Police showed Mr. Anderson out, Hall said “It is not me versus the Police Department.” As he concluded his remarks, Hall again said he welcomed anyone to make an open records request to look at any of the files of those who had been terminated or who had resigned.

‘We Have Made Tremendous Progress’

Glenn Heights Mayor Pro Tem Sonja Brown said, before voting in favor of the resolution, that she urged all citizens to request open records. Concerned citizens can see for themselves the documentation of those who had been terminated and who had resigned since Hall took the helm as City Manager.

As the meeting was coming to an end, Garrett stated “In 20 years proceeding Hall we have had more than a dozen City Managers. People would stop here and move on, Mr. Hall has not … we have made tremendous progress.”

Garrett also wondered what had happened in the last two months since Hall was celebrated by every department.

“The loud minority gets all the voice,” Garrett added. “This city needs to rest; we are making positive progress in this city.”

*We encourage concerned residents to view the City Council meeting for yourself: https://glennheightstx.swagit.com/play/09072021-1108

**Focus Daily News has made an appointment with the City Manager next week to look at the open records of all terminated and resigned employees in the past three years and will report any information that is in question at that time.

Also, during the council meeting, budget items were discussed and council voted 5 – 0 on adopting and levying ad valorem taxes for the fiscal year 2021-2022 at a rate of $0.769146 per $100 assessed valuation on all taxable property within the corporate city limits of Glenn Heights. Council also approved the 2021 estimated tax roll.

It was determined the Glenn Heights Senior Center would not reopen until January 1, 2022 due to the pandemic. Staff told council even though this is the case senior services are still in place. Breakfast meals were recently added to accommodate citizens during this time.