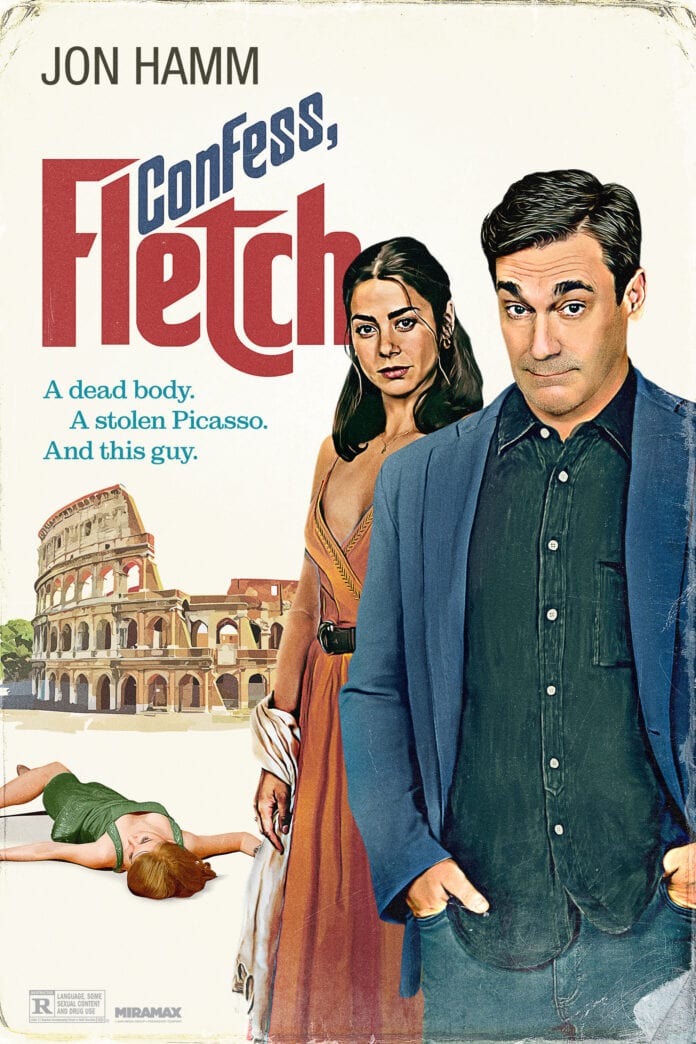 For those of us who enjoyed watching Chevy Chase as a bumbling but loveable I. M. “Fletch” Fletcher in the hit mid-1980s comedy, it’s refreshing to see Jon Hamm as a more mature and suave version of Gregory Mcdonald’s fictional investigative journalist. Fletch has left his career as an “investigator of some repute” behind, and he’s now a laid-back, freelance art writer who’s new gig allows him to live a playboy’s lifestyle. Because of his investigative skills, he’s been hired to help a wealthy Italian Count solve the thefts of some valuable art, including a Picasso.

When the Count is kidnapped, his daughter (Lucy Punch) begs Fletch to find her father and the paintings…not necessarily in that order. Hamm looks almost as Dapper as Don Draper from his Mad Men days, except for the purple Lakers cap he wears with his blazer and loafers. Arriving in Boston on the trail of the missing paintings, he discovers a dead woman in the flat rented for him by the count’s daughter. The local police detective (Roy Wood Jr.) and his colleague Griz (Ayden Mayeri) immediately focus on Fletch as the murderer, since he seems unfazed by finding a dead body in his rented flat. Fletch realizes he’ll have to solve this case on his own to convince the Boston police he’s innocent and continue his search for the paintings.

The screenplay for Confess Fletch is adapted by Director Greg Mottalo and Zev Borow from one of Mcdonald’s novels. It’s an endearing comedy romp more than a whodunit, and we’re entertained by a number of eccentric suspects. There’s the kind-hearted but self-destructive next-door neighbor (Annie Mumolo), a strange art dealer (Kyle McLachlan), and the Italian Countess (his girlfriend’s aggressive stepmother) played by Marsha Gay Harden. It’s great fun to watch Hamm interact with his old MM colleague John Slattery (as Fletch’s former newspaper editor).

This is a short (98 minutes) film, but it’s one of the most enjoyable films I’ve watched in a while. I’d love to see more of Hamm in this kind of role, maybe even in some Fletch sequels. Confess Fletch received a limited theatrical run and PVOD starting Sept. 16. The film is set to stream on Showtime starting October 28, where it should earn a devoted following. Confess Fletch is rated R for language, some sexual content and drug use.