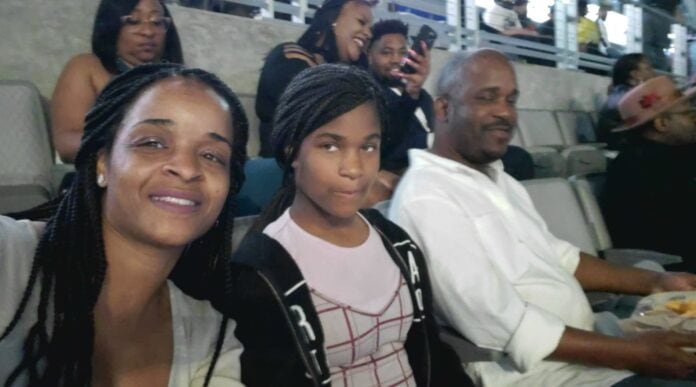 Growing up has enough challenges of its own. It takes strength to get to adulthood.

Then there are some, like London Gregg, an 11-year-old sixth-grader in Cedar Hill who battles the disease of lymphedema every day.

The condition, which affects one in about every 8,000 citizens, is caused by a blockage in the lymphatic system, part of the immune and circulatory systems. The main symptom is swelling in an arm or leg that may be accompanied by pain or discomfort.

“We found out London had lymphedema in December 2019. After she had three episodes of swelling and pain in the left leg that we couldn’t get to go down. It just continued to get worse,” said her mother, Tequana Clark, who is working to raise awareness of the disease and hope to start a support group.

London has to use a lymphatic pump at least twice a day. Each morning she gets up early to complete 60 minutes on the pump. Her leg is wrapped in a seven-piece garment that’s he wears underneath her pants.

London has lymphatic therapy three times a week (that has to be paid out of pocket at $150 each visit) with a licensed therapist in 90-minute sessions.

“We do have to travel to Houston for treatment. We couldn’t get any answers in the Dallas-Fort Worth area,” Tequana said. “We tried several times with no success. Thankfully, her pediatrician Dr. Ali, listened to me and referred us to another medical group.”

As to how London’s condition came to be, Tequana said, “We are awaiting the results of her second genetics testing. So we are still awaiting answers.”

Just like other youngsters her age, London enjoys life. She likes playing sports, volleyball and basketball, and, of course, video games daily.

But she has a lot of sleepless nights, Tequana said. The major symptoms of lymphedema are swelling and pain, which often happen during the night.

“Her young body can only handle so much, and as a parent I can’t stand seeing her in pain. We have tried everything from massage therapy, pain meds, detox, compression socks, and doctors,” Tequana said.

The treatment is expensive. Tequana said even after insurance payments her family still had over $20,000 in medical bills.

“Most of the care is not covered under insurance, or the doctors and facilities are out of network,” she said.

However, they did receive information about a helpful foundation during a therapist visit in Houston, Tequana noted.

“I was very hesitant to reach out because you just don’t know. But it was one of the best things I did,” she said. “The founder is a mom with a child going through the same thing. Brittany was able to answer so many questions for us.”

The foundation has been able to help with nightly wrap supplies and a wealth of knowledge.

And now, Tequana is working hard to raise awareness. She has started making t-shirts with lymphedema awareness messages on them. She’s also gearing up for a walk in March, which she has asked different family members and friends to join them on. She is also asking nonprofits to help spread the word.

“I was told we need to get a 501c3 to be able to ask for donations that would help other families going through this in the DFW area,” she said. “So I am hoping I have everything in place to help as many kids battling lymphedema as possible in March.”

As for what the public can do, Tequana added, “If the public can pray for the kids with lymphedema and a cure. If they can donate time and financial support. Please come walk in March to get the awareness out. Our babies can’t fight for themselves, we have to be that advocate.”