DALLAS—Cedar Hill resident Mia Dominique Duarte is both a beauty queen and an engineer. Moreover … she’s not yet in high school!

The 8th grader created a special chair for her autistic brother to help comfort him when he gets anxious. She took a regular chair, and made it into a rocking chair. Then she added a vest and some weights. Now when her brother gets upset or nervous he can strap himself into the chair and rock. That comforts and calms him down.

It started as a science project for a STEM (Science, Technology, Engineering and Math) contest, but now her chair with the vest filled with beans to weigh it down (“It feel like a hug if you’re strapped into it,” Mia explains) may soon become a patented solution to what many autistic children feel: out of control.

Mia’s brother is severely autistic and needs round-the clock supervision. Her father, Fernando, quit his job to be as stay-at-home dad for his son, when he grew too big for his mother, Veronica, to handle. Now she goes to work while father and son go through their day at home. Mia’s chair helps.

Called a “Sensory Therapy Chair” she explains it’s an aid to stimming, a self-stimulating behavior common to autistic children. The compression and weight helps those with the sensory processing disorder feel safer and in control, much like a newborn baby feels safe when snuggled into a tight blanket, wrapped like a burrito.

Standing Out In The Crowd

The middle of three children, Mia has an older sister, 21-year-old Luciah, (“We call her Lu Lu,” says Mia) who looks a lot like her little brother, Raulito. Mia is the only one of the three with a distinct red shade to her dark hair, which prompts her big sister to joke that she is the “red-headed step child.”

Mia doesn’t mind that at all. It may be one of the many reasons she was noticed in a beauty contest last year, the Miss Cinco de Mayo pageant. Her aunt Hilda—Tia Hilda—tipped her off to the Latino Cultural Center’s contest, and Mia registered and competed in the event which included an evening gown competition, and a more casual dress portion of the contest in which she incorporated a pin that promoted a cure for autism.

Although she’s an 8th grader, she’s looking to her future which she hopes includes an exciting high school career and college, studying Bio Chemistry at Princeton.

“We must find a cure for Autism,” she says earnestly. “Along the way, finding an aid—a medicine that can help—is important. One that doesn’t have the negative side effects the most common ones have, like extreme weight gain and violent outbursts in those who take them.”

Sounding more like a scientist than an almost-14-year-old (her birthday is in March) Mia attributes much of her scientific knowledge to her science teacher Ms. Rice, at St. Elizabeth of Hungary School, and her critical thinking skills to her social studies teacher, Mrs. Whidden.

“I attribute a lot of my critical thinking skills to my social studies teacher, Ms. Whidden. I feel that she has helped me with a lot in my academic career, and I love the fact that she makes it a point to include everyone in her class, and does a lot to help students even outside the classroom,” Mia explains.

Mia says her love of sports comes from her father’s influence, “who encouraged me in all different sports,” and, “my mother taught me to love school, and that everything has a meaning behind it and had a lesson to it. Whenever I would ask her about different things, be it something random at the grocery store or an educational or cultural piece of literature or film, her response would be ‘Look it up, then we will talk about it.’ I feel like my mother has prepared me well for my academic and personal endeavors.”

One of those endeavors is shaping her future.

“I am a science nerd,” she admits proudly, “But for fun, I’ll read just about anything.” Her latest short story read, “The Yellow Wallpaper,” was read in her Literature Class with Mrs. Borth. The story is about a woman suffering from post-partum depression and the chemical changes which happen in a woman’s body after birth that affects her emotions. It clearly has a science and psychological bent, which Mia loved.

Helping others comes naturally to Mia. She spent two weeks this summer at St. Elizabeth’s, assisting in the STEM camp, leading younger students through their experiments, working as a teacher’s aide–and in many cases, as the leader in the classroom.

A natural leader, Mia hopes to attend Ursuline Academy next fall to continue her studies in both science and literature, and increase her knowledge and chances of attending Princeton one day.

With the Cowboys season over, Mia has a few more hours on Sunday to play with her dog—named “Dogg” by the brother—and read for pleasure, since she can’t watch her favorite athlete, Zeke, race down the football field for a touchdown. She looks forward to next football season, and her future.

For now, she is happy to attend the school she loves, then return home to the little brother she helps care for and the family she loves, dreaming about her future inventions that will make the world a better place. 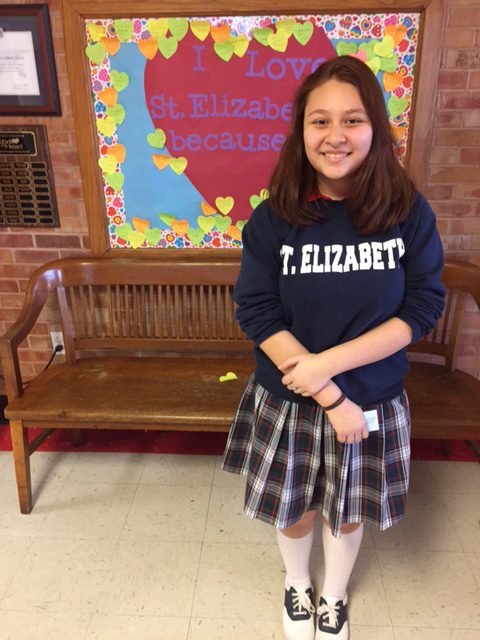