Cedar Hill head football coach Carlos Lynn believes there’s a lot more to winning than scoring more points than an opponent – though he’s also done his share of that as well in his career.

“When you make kids feel they’re a part of something special, they go on far beyond you,” Lynn said.

Lynn should know. Now age 47, he’s been a leader since his younger days, graduating eighth in his class at Wilmer-Hutchins High School in 1991. He went on to be a dean’s list student in college at East Central Oklahoma University. Also, he was quite the athlete, helping the Wilmer-Hutchins football team win the 1990 Class 4A state championship, winning an individual state powerlifting title that same year, and later helping East Central to a National Association of Intercollegiate Athletics football championship in 1993.

Lynn returns to Cedar Hill in 2017

And now he’s back at Cedar Hill, taking the head coaching job of the football program in 2017. He was previously an assistant with the Longhorns from 1998-2008, coaching the defensive line, as well as being the head powerlifting coach.

“We never moved. It was only about a 25-minute drive from our home to (Arlington) Seguin,” he said. “My wife works in the district some, and it was a chance to bring the family back together. It was a chance to come back to where I cut my teeth.”

While Lynn was at Cedar Hill the first time the Longhorns won the first state championship in school history in 2006. They won two more, in 2013 and 2014, while he was at Arlington Seguin building that program.

Building the program at Seguin meant more than winning, though the Cougars did make the playoffs three times out of a tough district. However, his biggest impression at the school might be two programs he spearheaded called Seguin Girls Rock and Seguin M.E.N., which stands for Magnificent, Educated, Needed.

“Our young men needed to be pushed to a place where they were needed,” Lynn said. “There were some issues around the city where we could help the community, such as single mothers needing their young men to step up.

“Also, we had a lot of young ladies who were not connected to any program, no sports, not going to school. We said let’s get them involved. We felt like if they were a part of something that would change – and it did.”

Lynn admits it was hard to leave the progress he made at Seguin and said a part of his heart will always be there, but Cedar Hill is home.

“I think we did as good as we could at Seguin. We brought the program to respectability, won a district championship, and most important we got the kids in school,” he said.
“Coach Lynn is a strong Christian man that always puts kids first. As a football coach, it’s not just about football for him, but building character and young men,” Cedar Hill Acting Executive Athletic Director Melanie Benjamin said. “His motto this year was Vital Things, emphasizing to his student-athletes it’s the little things. You must always pay attention to the details.

“Carlos pours into his student-athletes daily and it shows by the hard work and admiration his players have for him and his staff.”

While he said there hasn’t been a need to implement such programs at Cedar Hill, he’s ready should the time arise.

Dynamic is different at Cedar Hill

“It’s a different dynamic at Cedar Hill. Most of the kids here are involved,” he said. “It makes a difference, the brand and the tradition here is so rich they want to be involved. You want to build and keep that legacy going.”

His first season back at Cedar Hill was challenging as the team dipped to 4-6, making it even tougher to follow in the footsteps of legendary Longhorns coach Joey McGuire, who left to become an assistant at Baylor. But the next two seasons Lynn and his crew righted the ship, going 18-5, including 9-3 this season.

“It’s hard to follow a legend. It was a different beast, but we were able to manage it,” Lynn said. “Now my guys are in place, we know what to expect, and we’re looking forward to the future.

“Of course you always want to go on, but we have won back-to-back district championships in one of the toughest districts in the nation. But our kids and staff are still hungry. We’re not satisfied.”

The Longhorns will return 26 lettermen next season, including junior (this season) quarterback Kaiton Salter, the district MVP, from a team that advanced to the second round.

Lynn’s first coaching job was as an assistant at his alma mater, Wilmer-Hutchins. He once dreamed of being the head coach there, but now he’s content that his home is in Cedar Hill. His son Caleb will likely be playing for him on the varsity next season as a junior.

“I’m looking forward to him getting up here. That’ll be special,” Lynn said.

Of course, college is also a temptation to high school coaches of such elite programs.
“I’ve had quite a few offers, but timing is always a factor, and I’m really comfortable here,” he said. “If I had my druthers, this is a place I’d end my career.

“But those kids at Seguin will always be special to me. I’m proud of what we did there.” 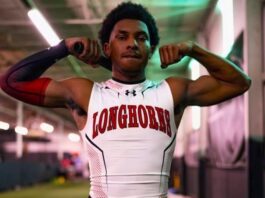 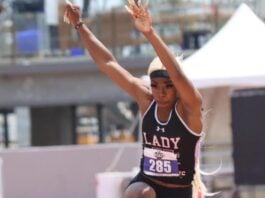 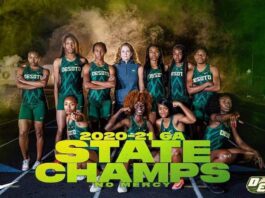