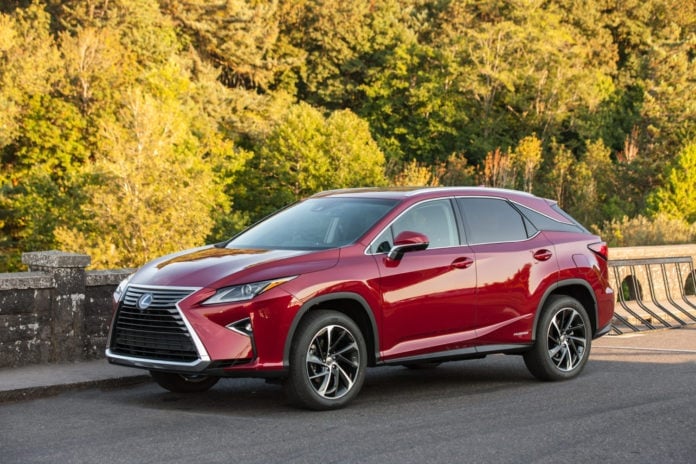 The vehicle that jump-started the mid-sized luxury crossover craze in the late 90s is as charming, comfortable and compelling as ever-and is now reborn again. The all-new fourth generation 2016 Lexus RX gets a boost of refinement on all fronts but preserves the qualities that made it appeal to many buyers looking for a sprightly and safe compact ute with unique style. After all, it’s been the best-selling vehicle in the Lexus stable, the top-selling model in its class, and it’s updated with a new attitude of expressive tailoring, improved performance and more advanced technologies.

The 2016 Lexus RX comes in a 350 version and a 450h hybrid. Both are available in front-wheel and all-wheel-drive; each version has a souped-up F-Sport model with unique trims and boosted performance attributes, as well. 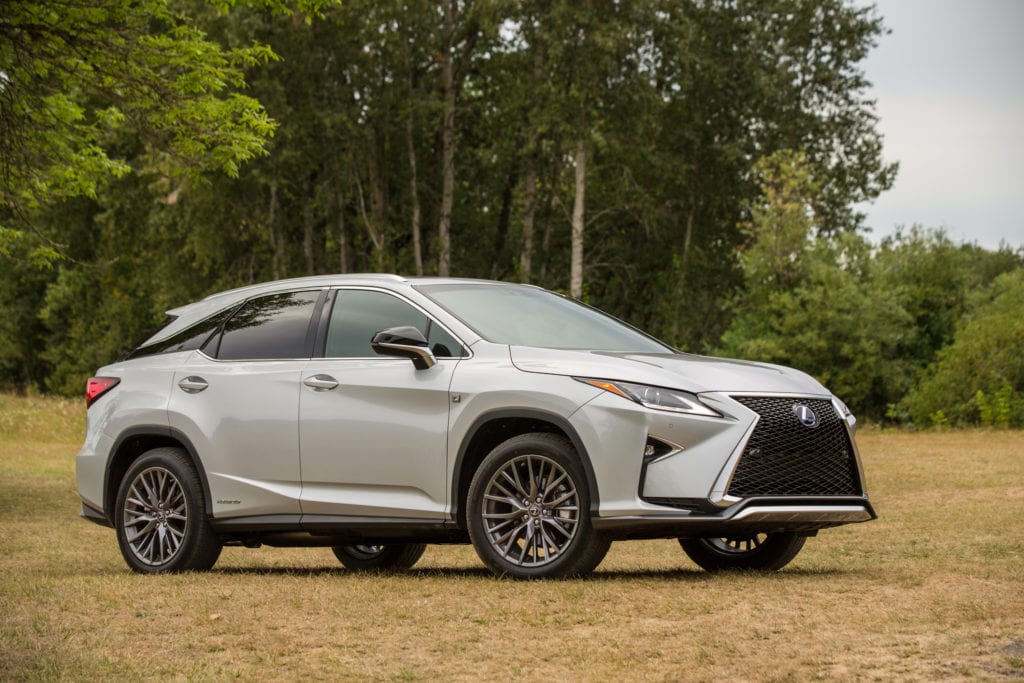 Lexus designers fashioned the newest model to represent sophistication with an edge. Its highly-sculpted form is cultured and urbane, with chiseled contours. Concave-yet-angular lower panels run the length of the doors, while a more traditional convex line runs the length of the body at door handle height; rocker panels are penned with an upward kick. The crossover is almost five inches longer, with lines that converge at the nose from two contours that split the hood. The most notable and edgy feature is its stretched hourglass-shaped black grille with thick chrome surround– it has a fierce look and is a size of almost menacing proportions. Attractive, slanted headlamps are punctuated by arrowhead-shaped fog lamps and LEDs come front and rear with a Lighting Package. The tailgate design is sharpened and a new optional hands-free liftgate allows easy opening of the back by waving a hand (even gloved) or an elbow near the Lexus badge. Optional 20-inch wheels also stand out from the crowd with colored inserts in titanium, black, pearl white or copper, while18-inchers are standard; all are shod with Michelin Premier LTX tires with a novel technology that extends the life of the tires.

Inside is a premium cabin that has been reimagined with high-quality trims, including aluminum and laser-etched Gray Sapele wood, Matte Bamboo, Expresso Walnut, and a collection of fine leathers. Styling cues from the exterior carry over with sculpted lines in the roomy, well-lit cabin with ambient lighting. Updates include a new instrument control panel and an ever-so-slight repositioning of steering wheel, front seat and the rear floor that maximizes interior space; there is ample space for five with good elbow room, and more cargo carrying ability than some competing vehicles in its class, says Lexus.

The base RX comes an 8-inch touchscreen that is paired with a Heads Up Display (HUD) to project navigation, speed limit, tachometer, and more on the windshield; a 12.3-inch Electro Multi Vision Display (EMV) screen is also available. An optional Mark Levinson 15-speaker sound system upgrades the base audio. All versions come with the Lexus Safety System +, which includes Dynamic Radar Cruise Control, Pre-Collision System with Pedestrian Detection, Lane Departure Alert (LDA) with Steering Assist, and Intelligent High Beam. LDA and Sway Warning sense movement out of the lane and gently correct, whereas Intuitive Parking Assist uses front and rear sensors to detect objects, and an available Panoramic View Monitor gives the driver a 360-degree view from above of the car.

Under the hood both the 350 and 450h come with a redesigned and more fuel-efficient 3.5L direct-injected V6 engine mated to an eight-speed automatic transmission; the 350 produces 295 hp. and 267 lb.-ft. of torque; the 450h is configured as a gasoline/hybrid and produces 308 total system power with instant torque on start due to the electric motors. It has an intelligent, fuel-saving E-Four AWD system.

With six different drive settings, Normal, Eco, Sport, Sport S, Sport S+, and EV (450h only), the drive experience changes as well as some cabin settings; Eco monitors the throttle response and the interior climate control. Sport S and Sport S+ are available with RXs that have Adaptable Variable Suspension (AVS) and are engineered to give increasing levels of a performance-oriented suspension. EV lets hybrid drivers operate the car purely off electric power and completely shuts off the gasoline powered engine. Additionally, drivers can customize the driving experience of F-Sport models through the dashboard display screen.

We were impressed by the quietness of the cabin, the great power-on-tap and good visibility. Lexus has slimmed down the pillars framing the windshield and the rear C-pillar giving the driver a wider view in all directions, including rear blind spots. The digital gauge cluster has the look of a classic analog gauge with the modern touch of features like changes in mood lighting, depending on the drive mode selected.

Notable are the smooth-shifting transmission, the upgraded brakes, and the comfortable ride that comes from refinements to the suspension system to increase handling prowess and rigidity. The RX’s steering has also been tweaked for precision.