A 1965 graduate of W. H. Adamson High School in Oak Cliff, Oakley joined the United States Army after three years of college. Within a year he earned the rank of sergeant and was sent to combat duty in Vietnam. He served as a light weapons combat infantryman whose duties included searching enemy bunkers and tunnels for the placement of C4 explosives. He earned a Purple Heart for combat wounds, and five other battlefield decorations including the coveted Combat Infantryman Badge.

After retiring from military service, Oakley chose a civilian career that would allow him to be of service to his fellow veterans. He worked for 15 years at the San Antonio based USAA and served in an executive management capacity for his last 5 years. While at USAA, in the aftermath of Hurricane Katrina, Oakley volunteered over three months of service to the Katrina Evacuee Shelter at Kelly Air Force Base in San Antonio where he served with the Greater San Antonio Red Cross conducting all volunteer community relations activities for 15,000 evacuees. 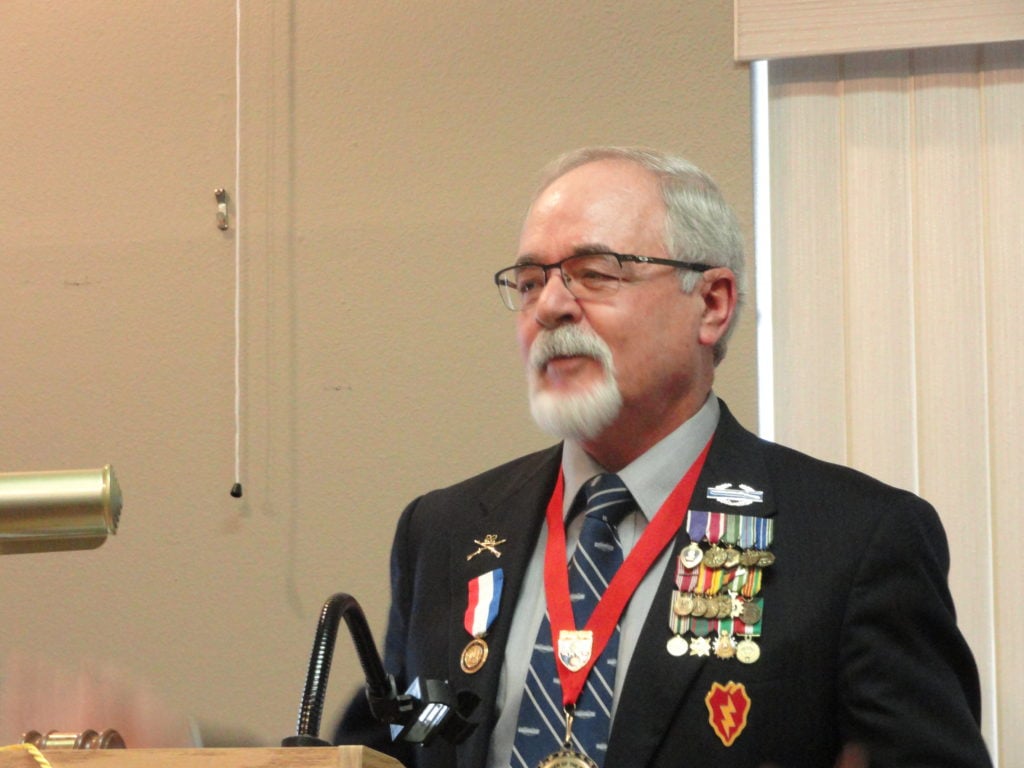 He also served in working through San Antonio Independent Living Services (SAILS) to tend to the needs of evacuees with disabilities. SAILS assigned Oakley to brief Senator John Cornyn on the evacuee center’s responsibilities. He is past chairman of the Board of Directors for SAILS and currently serves as Chairman of the Board Emeritus.

Peter Holt, owner of the San Antonio Spurs, served with Oakley in the 22nd in Vietnam. Holt enlisted Lt. Col. Oakley to work with him to raise the funds to complete the Vietnam Wall Visitors Education Center in Washington, D.C.

When Lt. Col. (R) Steve Russell was elected to Congress, he commandeered Oakley to complete the $200,000 capital fundraising campaign to place a stone monument at Ft. Benning, Georgia’s National Infantry Center Museum, honoring all the 22nd Infantry Regiment’s 2,458 fallen brothers since the War of 1812.

Although retired from the service for over 20 years, as President of the 22nd Infantry Regiment Society, Oakley was invited to be embedded for several days with the 22nd Infantry at Ft. Polk, LA as they underwent training at the Joint Readiness Training Center, in preparation for their deployment to Iraq in June, 2015.

Oakley organized an “Adopt-a-Platoon” effort with family, friends, and a San Antonio bakery, to periodically send boxes of cookies to his former army platoon in Iraq. He wrote a booklet, Welcome Home, Brother to assist 22nd Infantry Regiment Society members in finding fellow Vietnam soldiers with whom they served. He compiled and edited a book, Oak Cliff Boys, and has donated over $12,000 to Adamson High School library from the book sales.

He became an expert on the Kennedy Assassination, and wrote Two Deaths and An Arrest, which has been placed at the Dealey Plaza Sixth Floor Research Library and at the University of Texas and Baylor University libraries.

Lon Oakley participates regularly in the San Antonio North East Independent School District’s “Watchdogs” program and has spent over 100 hours as a volunteer in his granddaughter’s elementary school.

Lon Dale Oakley, Jr., a man who rose from a 114-lb. Private in the Army, who slithered down enemy tunnels in Vietnam, and retired after earning the rank of Lt. Col., has lead a life of unselfish devotion to his family, his church, his schoolmates, fellow citizens, fellow veterans, and his country. This Purple Heart combat veteran is comfortable donning a Frosty the Snowman costume for his granddaughter’s elementary class, has served his county for 23 years, and continues in civilian life to serve his fellow veterans.

James L. May, HMOR, Quartermaster, 22nd Infantry Regiment Society, writes in his letter of recommendation for Lt. Col. Oakley, “Lon’s career was filled with awards and recognition. Among them are the Combat Infantryman’s Badge, the Purple Heart Medal for wounds received in Vietnam, 3 Meritorious Service Medals, 4 Army Commendation Medals, the National Defense Medal with Gold Star as well as four Overseas Bars. These awards are not passed out, they must be earned. Anyone familiar with Army awards would quickly understand that Lon had a very successful career in the Army.

Lon Oakley joined the Vietnam Triple Deuce in 2003 and quickly became involved in seeking out those he had served with in Vietnam. The primary mission of the Vietnam Triple Deuce is to aid those who served with the unit in Vietnam and bring them together. He wrote a guideline, Welcome Home Brother for other members to use to locate their buddies. He was elected to the Board of Directors and served as Vice President until he was elected President of the 22nd Infantry Regiment Society.

The 22nd Infantry Regiment Society is a much bigger organization than the Vietnam Triple Deuce and its membership is not limited to those who served in one battalion in Vietnam, but is comprised of those who served in any of the Regiment’s four battalions during WWII, the Cold War, Vietnam, Iraq, Afghanistan, and those soldiers who are presently on active duty. Lon’s responsibilities are 10 fold what they were in Vietnam Triple Deuce.

As President, he organized the most successful reunion the organization has ever held, and most recently directed and completed the fund raising efforts to erect a monument to every soldier who has given his or her life in combat while a member of the 22nd Infantry Regiment. The Monument has been erected at the National Infantry Museum at Ft. Benning, GA. There are over 3,000 names on this monument, beginning with those who were killed in action during the War of 1812 and continue with every action the Regiment has been involved in since that time, including those who were killed in action in Afghanistan and Iraq.

The 22nd Infantry Regiment Monument is the only monument at the National Infantry Museum erected by a numbered Infantry Regiment. None of this would have happened without Lon’s leadership and hands-on involvement. These efforts have not gone unnoticed. Lon was recently designated a Distinguished Member of the Regiment by the Secretary of the Army.