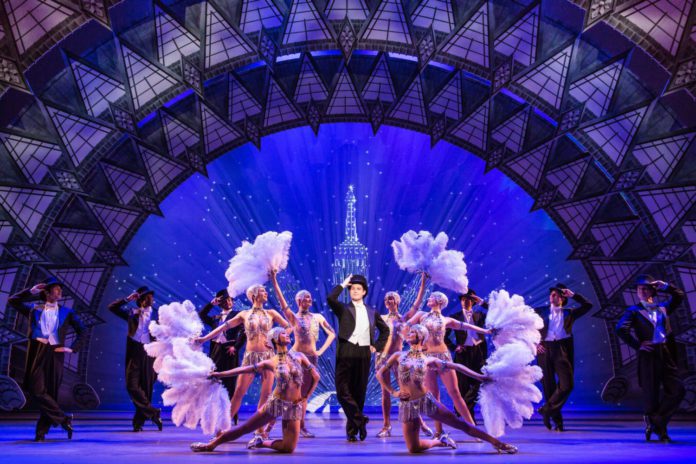 The Tony-Award winning musical “An American in Paris,” comes to North Texas Jan. 31, 2017. The lavish production will be presented by Dallas Summer Musicals at the Music Hall at Fair Park Jan. 31-Feb. 12. Just in time for Valentine’s Day, the romantic musical—based on the classic film—will be presented by Performing Arts Fort Worth at Bass Performance Hall Feb. 14-19.

“An American in Paris” is directed and choreographed by 2015 Tony Award-winner Christopher Wheeldon. The show features the music and lyrics of George Gershwin and Ira Gershwin, and a book by Craig Lucas.

Jerry Mulligan and Lise Dassin will be played by Garen Scribner and Sara Esty. The duo also performed the leading roles of an American soldier and mysterious French girl on Broadway. Also featured are Etai Benson as Adam Hochberg; Emily Ferranti as Milo Davenport; Gayton Scott as Madame Baurel; and Nick Spangler as Henri Baurel.

The score of the musical includes such unforgettable songs as “I Got Rhythm,” “Liza,” “‘S’Wonderful,” “But Not for Me,” “I’ll Build a Stairway to Paradise,” and orchestral music including “Concerto in F,” “Second Prelude,” “Second Rhapsody/Cuban Overture” and “An American in Paris.”

The production opened to critical acclaim at the Palace Theatre on Broadway on April 12, 2015. This followed the world premiere at the Théâtre du Châtelet in Paris November 22, 2014-January 4, 2015. The New York production closed on October 9, 2016 after playing more than 600 performances. A West End production of the show is scheduled for March 2017 at the Dominion Theatre.

Tickets on Sale Now for Dallas and Fort Worth Productions

Single tickets for the Dallas engagement of “An American in Paris” start at $25, and are available at www.DallasSummerMusicals.org or by phone at 1-800-745-3000. Groups of 10 or more receive a 15% discount, priority seating, and many more benefits. Please call 214-426-4768 or email Groups@DallasSummerMusicals.org.

Disney’s “The Lion King” will roar back into the Music Hall in DSM’s 2017-2018 season. Performance dates and times will be announced at a later time.