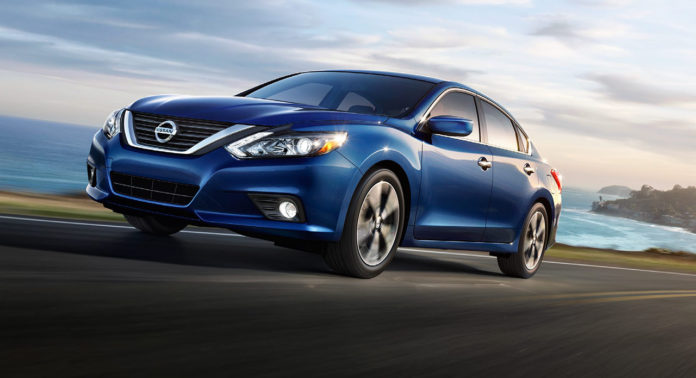 Nissan has rejuvenated its popular Altima midsize sedan for the 2016 model year with a more contemporary exterior look; a refreshed interior styled with premium soft-touch materials, enhanced connectivity, and additional safety and technology features; as well as expanded the model lineup with a sporty new SR trim level.

Although the Altima was totally redesigned just three years ago, Nissan has since developed a modernistic “Energetic Flow” exterior styling theme. Nissan says  the 2016 Nissan Altima new outside looks better reflect its latest design language, bringing it closer in its appearance and feel to the 2015 Nissan Murano and 2016 Nissan Maxima.

The latest expressions include a new hood and fenders, as well as new tailored character lines. The muscular front fascia boasts a distinctive “V-motion” grille and bumper with redesigned headlights and available signature LED boomerang headlights, fog lights, and daytime running lights. In the rear, the fascia and bumper feature lower and wider four-piece boomerang taillights, and an updated trunk lid.

Inside, the new Altima shares the “gliding wing” design language established with the new Murano and Maxima and features a new Advanced Drive-Assist display located in the instrument panel between the tachometer and speedometer; this customizable 4-inch color display integrates key information for the driver.

A new center stack features a standard 5-inch color audio display on Altima 2.5 S, 2.5 SR, 2.5 SV, 2.5 SL, and 3.5 SR trims, shows images from the RearView Monitor and allows access to the standard NissanConnect with Mobile Apps system (except on base models). The system includes a USB port with iPod connectivity and Siri Eyes Free voice recognition, plus has a hands-free text messaging assistant that allows drivers to listen and respond to text messages by voice control, without taking their hands from the wheel or eyes off the road. Premium, soft-touch materials are used throughout (with leather-appointed seats depending on model), and Zero Gravity front seats are standard on all trim levels.

NissanConnect with Navigation and Mobile Apps is standard on 3.5 SL and optional on 2.5 SV and 2.5 SL, and offers a 7.0-inch touchscreen with 3D-effect map views, as well as voice recognition and turn-by-turn navigation. NissanConnect Mobile Apps include Online Search powered by Google (on navigation-equipped vehicles), Facebook and others, along with the ability to add new apps throughout ownership of the vehicle.

Available “Safety Shield Technologies” include blind-spot warning system with rear cross traffic alert, intelligent cruise control, and Nissan’s predictive forward collision warning with forward emergency braking, which can sense the relative velocity and distance of not just the vehicle directly ahead, but also of the vehicle traveling in front of the preceding one, to alert the driver to a potential forward collision, and even brake if necessary.

Altima has posted five consecutive years of increased sales, and Nissan predicts the updated model will continue that trend.