A $10,000 reward has been offered for any information leading to the apprehension of 14-year-old Abel Elias Acosta, who is the shooter responsible for killing three and wounding a fourth at a convenience store on December 26, 2021.

In addition to the Garland Crimestoppers reward of $5,000, Jerry Reynolds, talk show host on WBAP Radio, has offered an additional $5,000, making the total reward of $10,000.
Abel Acosta is described as a light-skinned Hispanic male with dark hair, brown eyes, approximately 5’ 05” in height, and weighing around 125 pounds. 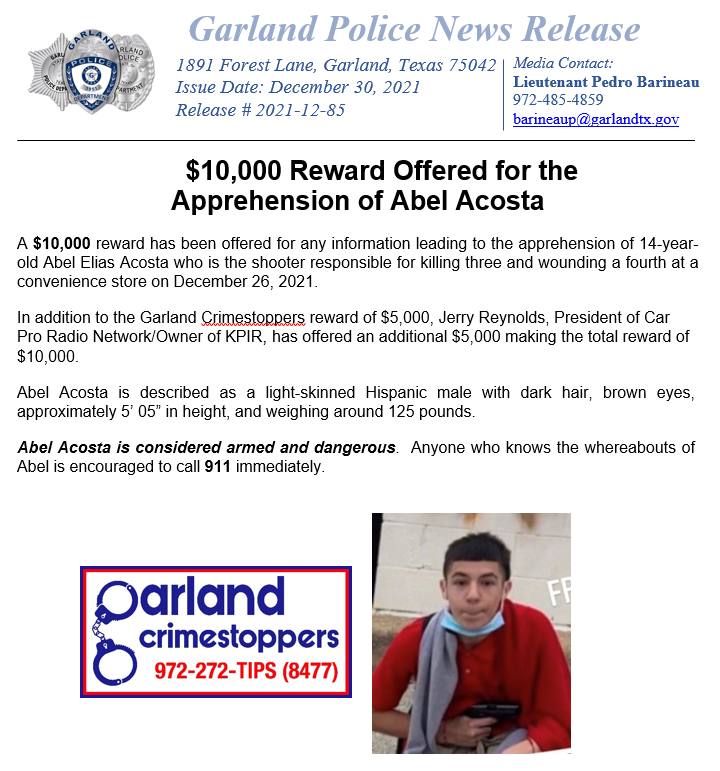 Abel Acosta is considered armed and dangerous. Anyone who knows the whereabouts of Abel is encouraged to call 911 immediately.

Garland Police Lt. Pedro Barineau said, “He could be here in town, he could be in a surrounding city, we don’t have his exact known whereabouts but somebody does and we need their help”

a) On the request of a law enforcement or probation officer, a juvenile court may issue a directive to apprehend a child if the court finds there is probable cause to take the child into custody under the provisions of this title.

Information detectives discovered shows that the driver of the truck, Richard Acosta, who previously turned himself in, is the father of the shooter, Abel Acosta.

Detectives have discovered the shooting was in retaliation to a disagreement between Acosta and one of the victims. The three victims who died were identified Monday as Xavier Gonzalez, 14, Ivan Noyola, 15, and Rafael Garcia, 17.