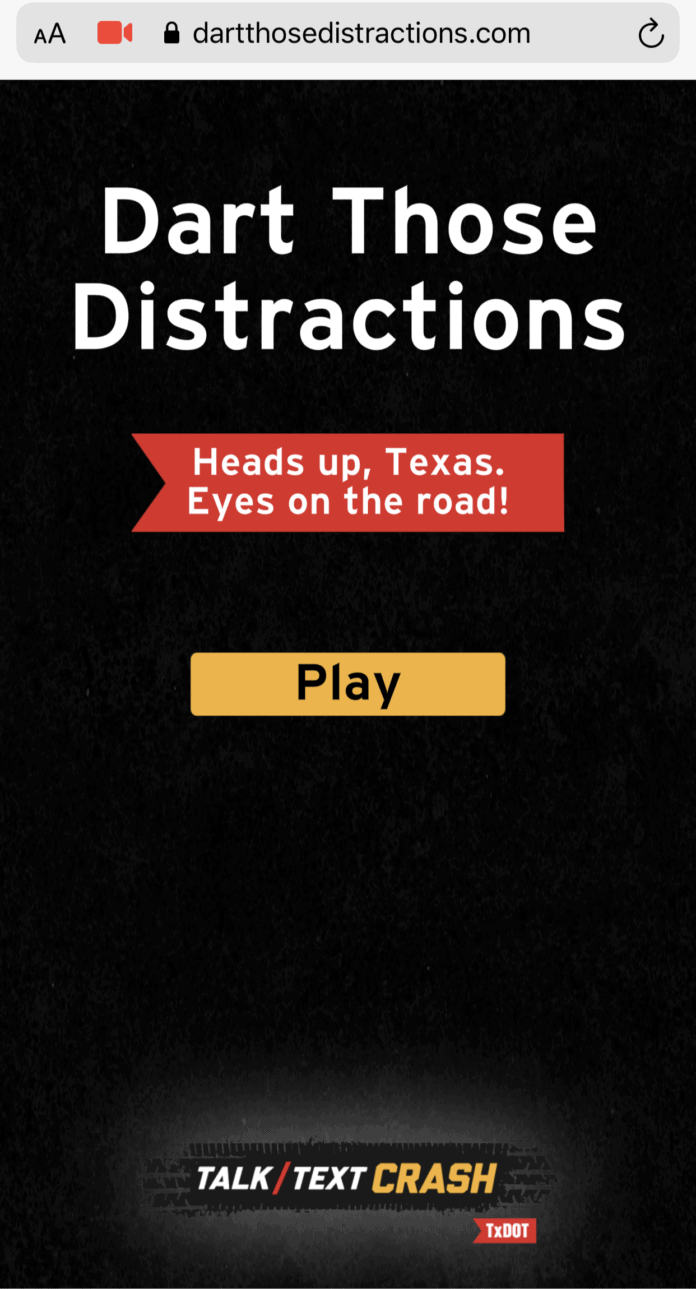 AUSTIN – Despite stay at home orders and less traffic the past few months, Texas has continued to see about the same amount of fatalities on our state’s roadways. This weekend in our local area there were at least two wrong way crashes and one vehicle ejection.

In an effort to reach drivers more creatively about the dangers of distracted driving, TxDOT has launched a new web-based augmented reality (AR) game that reinforces the importance of paying attention behind the wheel and reminds drivers to keep their heads up. Around 1 in 5 crashes on Texas roads are caused by distracted driving and all of them are preventable.

This new AR game “Dart Those Distractions” is designed to increase awareness about the dangers of distracted driving in an interactive, engaging way that resonates with all ages. Inspired by a classic carnival game, players will throw darts over a car windshield to hit balloons symbolizing driving distractions like eating, programming music or navigation and self-grooming. This is an important reminder that distracted driving isn’t just about texting or talking from the driver’s seat.

“Every driver and every passenger can be impacted by distracted driving and one death is one too many,” TxDOT Executive Director James Bass said. “We are doing all we can to make sure every Texan knows the dangers of driving distracted. Distracted driving crashes are preventable and we hope this new AR game will help drivers realize there are more dangers than just your cell phone in the car.”

TxDOT will promote the “Heads up, Texas” campaign and new AR game through social media, social influencers and digital advertising. These efforts are to raise awareness of the game and encourage people to share their results and recruit other players to dart those distractions. The AR game can be played on any smartphone or tablet by visiting www.dartthosedistractions.com or players can visit the website on a desktop computer to access the game through a QR code. Players should never play while behind the wheel, don’t add another distraction!

TxDOT’s annual “Heads up, Texas” campaign officially launches August 4 and is a key component of #EndTheStreakTX, a broader social media and word-of-mouth effort that encourages drivers to make safer choices while behind the wheel, like wearing a seat belt, driving the speed limit, never texting and driving and never driving under the influence of alcohol or other drugs. Nov. 7, 2000, was the last deathless day on Texas roadways and #EndTheStreakTX asks all Texans to commit to driving safely to help end the streak of daily deaths.